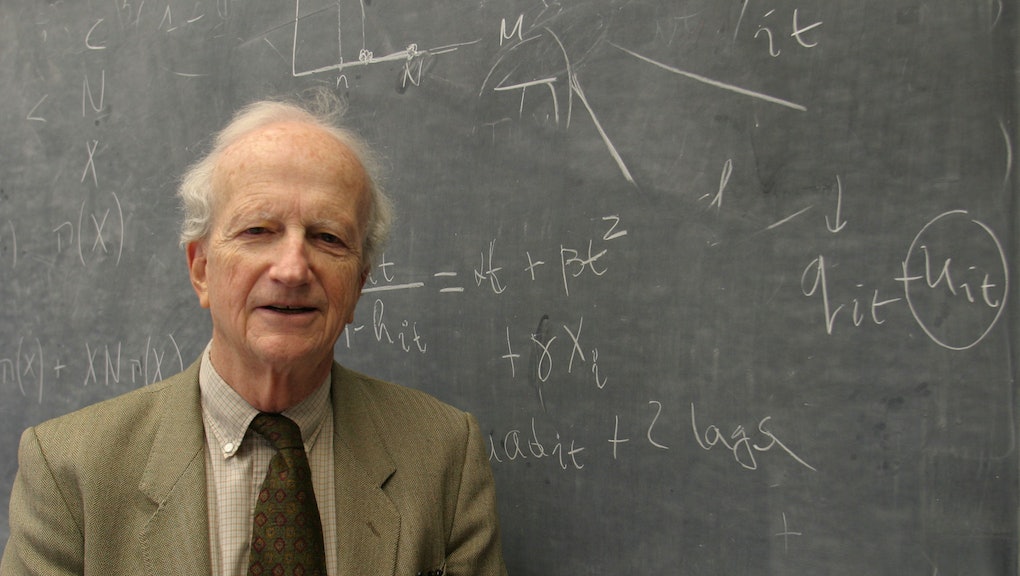 In some very sad news, economist Gary Becker — one of the first economists to try to explain topics like race, crime, drugs and human capital — has died at the age of 83. One of the most creative economists of his generation, Becker pioneered economic research into what eventually became the pop Freakonomics of Steven Levitt and Stephen J. Dubner. In 1992, he was awarded the Nobel Prize in economics for "having extended the domain of economic theory to aspects of human behavior which had previously been dealt with — if at all — by other social science disciplines such as sociology, demography and criminology."

His top works challenged assumptions that had sometimes stood for generations and have since gone on to radically influence both the way we think about specific issues and how, more generally, we approach various situations, drawing in systems of analysis and swaths of data we might otherwise think was unnecessary or irrelevant. Here's a glimpse of some of the late Becker's work:

The "rotten kid theorem." This proposal argued that if a household is headed by a generous person who provides financial support to other members of a family, each member (no matter how selfish) will "maximize his or her own utility by taking actions that lead to the maximization of total family income" — if they know what's good for them. That means even an extremely nasty son or daughter of an altruistic parent will have an incentive to play nice if the parents makes their welfare contingent on the welfare of their fellow progeny. Or, for example, they would have an incentive to help their siblings' career out if their destitution would mean the rotten, successful sibling would receive less money from the will.

In practice, this means that parents should delay gifts of money or expensive trinkets and gadgets to their siblings as long as possible ... preferably until after they're dead as a doornail. And it suggests that money should be willed out according to needs.

Though later economists showed that there were conditions under which the idea could be defeated, other contemporary research has shown it can be applied to an interesting number of situations, like whether you should let your spouse carry out some annoying behaviors because they'll overcompensate with gifts and doting behavior in return.

The economics of discrimination: In one of his more major theories, Becker argued against the Marxist theory of racism in his 1957 book The Economics of Discrimination, concluding that discrimination actually hurts both the victim and the racist. Marxist explanations of racial relations typically argue that discrimination gives the bigot a leg up, helping them systematically exploit minorities. But Becker formalized a definition of prejudice and argued that discrimination prevents employers from hiring the right people and assembling a productive workforce. Thus, non-discriminatory employers will eventually outcompete the racists, whose businesses will fail in a competitive market. Becker thus argued that racism is economically irrational.

This theory has been hotly contested (particularly on the left) ever since its introduction, but key takeaways like formal modeling of racism and the idea that racism can hurt a bigoted employer's success have remained in both the economic world and popular imagination.

Women in the workforce: Becker used the concept of opportunity costs (the loss of a potential gain from other alternatives when one option is settled upon) to explain why women were entering the workforce. Becker's "A Theory of the Allocation of Time" suggested that higher real wages in the market motivated women to leave the home and enter a more lucrative job market, economizing on the time that household tasks took by buying appliances and fast food.

He also argued that as women enter the workforce, the opportunity cost of childcare increases at the same time newer, higher-paying jobs create an incentive for parents to send their children to costly colleges and universities. The net result would be a fall in the fertility rate as parents decided to have less children.

Children: One of Becker's most famous (or infamous) conclusions is that children are "durable consumer goods."

Crime and punishment: At the time he was working, Becker's contemporaries thought that crime was primarily a product of mental illness and social oppression. Becker, after being rushed for time and opting to illegally park in a convenient spot, realized that crime could also be the product of rational decision-making. Essentially, he argued that people can choose to commit crimes if they decide the benefits (sex, money, drugs, free parking!) outweight the risks (the fuzz).

Becker's theory on crime lent itself to a simple proposition: The way to decrease crime is to raise the risks by increasing either surveillance (the chance of getting caught) or the punishment (higher fines or jail times). Basically, Becker provided a theoretical backing that correlated with seemingly intuitive conclusions, helping the modern "tough on crime" movement. It does, however, have limits like ethical considerations — Becker's theory suggests a society could easily cut crime down by lopping off heads at the first offense, but people generally don't do that for obvious reasons. To that end, Becker acknowledged that eradicating crime is basically impossible because it would take so much grief and money that an entirely crime-free society would be worse off than one that simply tried to minimize it. Would you want to live in a police state?

Organ markets: Becker and fellow economist Julio Elias, in their paper "Introducing Incentives in the market for Live and Cadaveric Organ Donations," argued that an international free market in organs would solve the problem of organ shortages and save lives. The duo estimated the cost of a pair of kidneys as $15,000 and a liver at $32,000. The price would primarily be determined by the supply of live donors rather than cadavers.

Critics argued that any such market would enable exploitation of the bodies of poor people in other countries, and that the organs would go to the highest bidders. Either way, Becker's proposal has unsurprisingly not gone into practice.