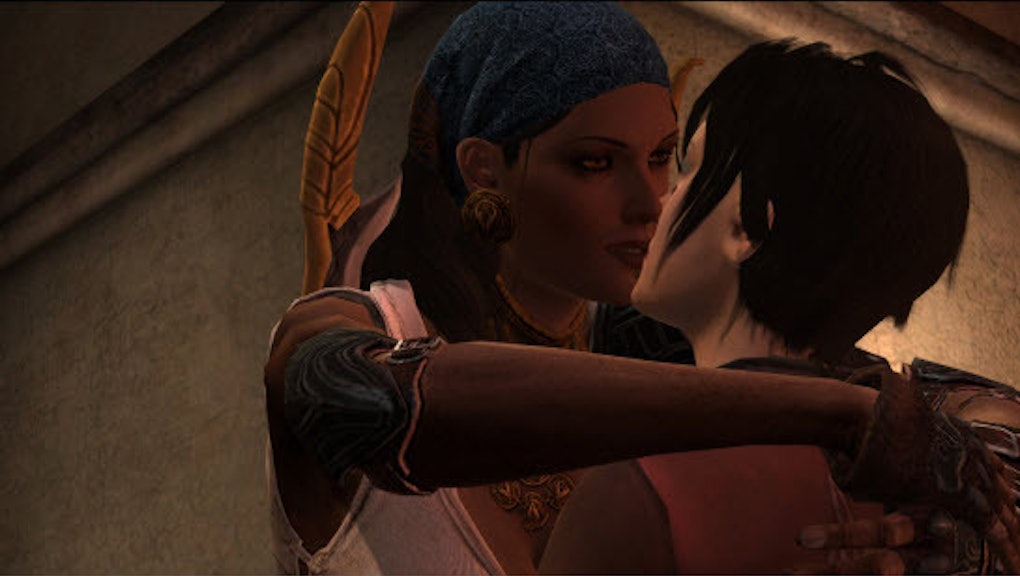 The Surprising New Place Where LGBT People Are Finding Themselves

Video games, at first glance, might not seem to be the most obvious medium for young queer folk, but they are fast becoming one of the most vital spaces for queer self-discovery. Transgender gamers, especially, are exploring their identities within virtual game worlds. By constructing avatars trans men and women are able to explore their identities within the relative safety of a game long before they can ever transition "in real life."

While transgender gamers have long shared these experiences on message boards and social media, mainstream publications are starting to take note of the trend. The Guardian's Laura Kate Dale, Autostraddle's Katherine Cross and Polygon's Jessica Januik have all written about the ways in which gaming helped them to transition. Cross writes:

"As I suffered through severe depression and suicidal ideation, I discovered roleplaying games to be a wonderful oasis that enabled me to live as someone more closely approximating what I would choose. Through heroines like Bastila Shan, or the ones I created from the ground up in Elder Scrolls: Morrowind, I gained secret role models who gave me hints of the kind of woman I’d like to be."

This situation is not unique to transgender people, and young queer gamers of all stripes are finding themselves in games. Kotaku writer Patricia Hernandez has written about the way in which Fallout 2 helped her to navigate the nuances of sexual identity. Kris Ligman of Critical Distance also discussed the ways in which the Mass Effect series’ focus on romance can bring out the contours of asexual identity by relief. And a panel at the popular Penny Arcade Expo recently explored gay gamers' particular affinity for role-playing games.

Still there is an unfriendly side to gaming that makes this a very unlikely LGBTQ haven. For one, most mainstream video game developers aren't producing openly queer content — Gone Home by the Fullbright Company is a recent and notable exception. Despite the fact that queer characters are, as Tim Bowers notes in the Guardian, edging their way into the side stories of mainstream games, LGBTQ people continue to be severely underrepresented in the medium as a whole.

There are also high-profile cases of misogynist, homophobic and transphobic harassment that plague the gaming space. Whether it's GameSpot reviewer Carolyn Petit being subjected to transmisogynist harassment for her review of Grand Theft Auto V or independent developer Zoë Quinn facing extreme forms of Internet abuse for submitting her game Depression Quest to a popular game distribution service, there remains a level of difficulty when it comes to LGBTQ people inhabiting the culture that surrounds video games.

So, in this medium that does not seem to prioritize its LGBTQ fans, why are those fans developing their identities through games? Or more specifically, what is it about video games that keeps LGBTQ players coming back, motivating them to try to stay in the center of the conversation rather than its margins?

Some preliminary answers to these questions lie in the kinds of protagonists that inhabit the video game world. Many video game protagonists are completely silent — not John Wayne silent, mind you, but completely and utterly silent. From Link in The Legend of Zelda to Samus in Super Metroid to the protagonists of many Final Fantasy games, video game heroes often move through their worlds without saying a word. Other characters in the game provide the plot and the exposition while the protagonist simply soldiers on.

Many LGBTQ people can relate deeply to that silence and to characters who keep their thoughts to themselves. Video game heroes are silenced as a convenience for video game developers: A less talkative protagonist means less money spent on dialogue and voice acting. But LGBTQ people are often literally silenced by a culture of exclusion. There's a similarity bond there that stretches beyond words.

Queer gamers, as Gay Gamer's Frank Fuentes notes, often rely on "inferring story and relationships that aren't specifically laid out in games." Silent protagonists allow the player to make such inferences more easily. Through the silent cipher of a Link or a Samus or a Final Fantasy hero, the rich internal fantasies of LGBTQ gamers can come to life.

Beyond this array of silent protagonists, many games allow players to create their own characters, particularly modern role-playing games like Bioware's Dragon Age and Mass Effect series, give the player a greater degree of flexibility in their interactions with the game world. In these games, players are allowed to handcraft their own protagonists with sliders that adjust everything from skin color to gender to cheekbone height.

LGBTQ people as well as people of color benefit from these customizable character creation systems as they allow the player to create playable characters that don't look like the typical video game protagonist (a straight white man in his 30s).

Players can use these character creation systems to create avatars with non-normative gender expressions and underrepresented ethnicities. The Saints Row series, in particular, has recently emerged as a virtual playground for gamers who cannot create themselves in any other game. By including a particularly robust character creation system, Saints Row games allow the player to create a protagonist of any size, any skin tone and any gender.

Against all odds, video games are becoming an critical foundation for queer-world building and LGBTQ identity development. As a result, the intersection of video games and LGBTQ advocacy has never been more bustling. From online publications like the Border House and Gay Gamer to conferences like NYU's Different Games and UC Berkeley's Queerness and Games to documentaries like Gaming in Color, more people are talking about LGBTQ issues in gaming than ever before. The most unlikely space for queer identity is finding itself in avatars.