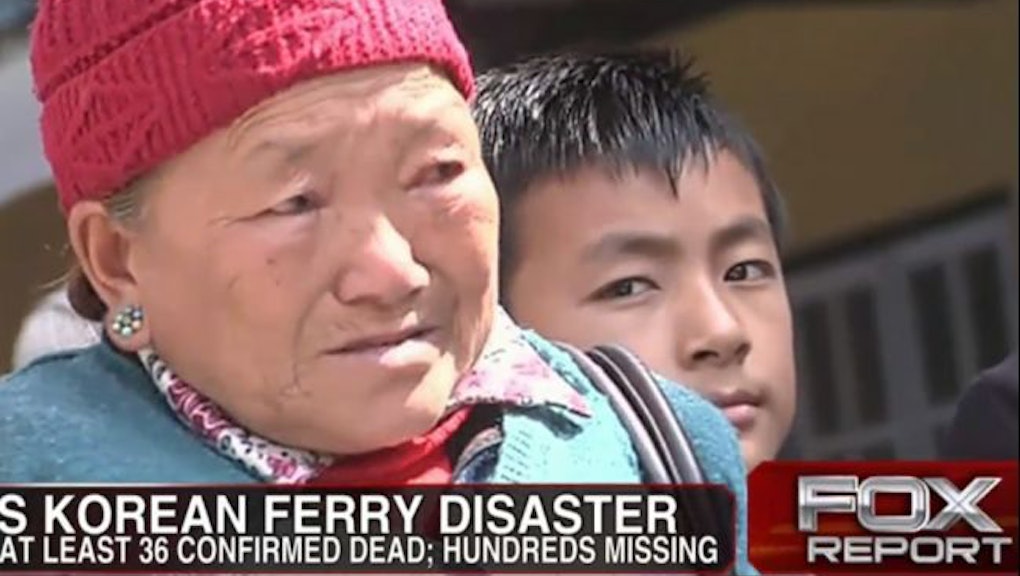 Instead of Using Footage of Actual Korean Mourners, Fox News Gets Creative

In its early coverage of the Sewol ferry disaster in South Korea, Fox may have used footage of random mourners of Asian descent instead of, you know, the hundreds of South Koreans who were actually mourning the loss of loved ones.

Bloggers are calling into question a shot featured at 1:40 of a Fox News video package that shows mourners who are "clearly not Korean."

One commenter says the mourners are "clearly Tibetan" and speculates the footage is taken from the April 18 avalanche on Mount Everest.

The footage appears as the reporter discusses the harrowing theory that more passengers could have survived if they had been told to evacuate.

At the time the segment aired, at least 36 of the ferry's passengers had been found dead, and the captain and his crew had been taken into police custody. Many of the passengers on board had come as part of a high school field trip group.

A representative of the Korean Cultural Center in Los Angeles said he had tried to contact producers at Fox through a variety of methods, including a message sent on behalf of the Korean consulate, but to no avail.

It's not clear if the apparent snafu is due to negligence or just plain ignorance on the part of Fox producers.

What is clear: There is no shortage of mourning from the Koreans affected by this tragedy.

Days after the capsizing, South Koreans had turned out in grief en masse. Memorial altars were erected in front of Seoul's city hall, and mourners stuck notes to the doors of the students' school, which was closed immediately following the disaster.

The death toll has since climbed to 260, and teams continue to scour the port to locate the 42 persons still missing.

The clip, from an April 19 Fox News segment, can be viewed in full here.