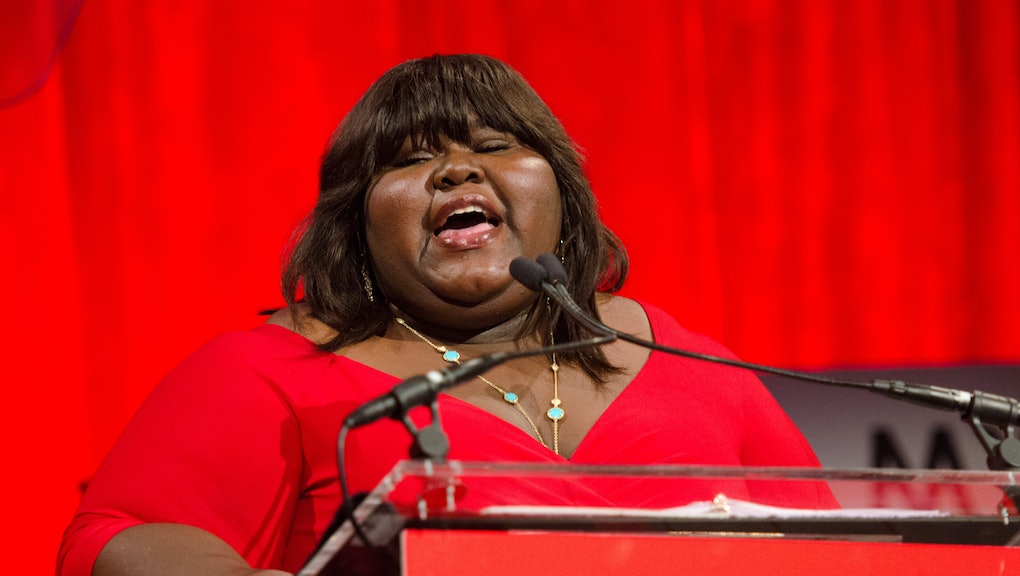 Gabourey Sidibe is no stranger to catty and condescending comments from people who think her weight is their concern. Which is why her impassioned and heartfelt speech at the Gloria Awards and Gala, hosted by the Ms. Foundation for Women, carries so much emotional weight.

Speaking to a room full of influential feminists last week, Sidibe spoke about her self-confidence, where it comes from and how others have tried to take it from her. People often ask her how she is "so confident," she noted, a backhanded compliment that continues to sting.

"They ask me with that same incredulous disbelief every single time," Sidibe said. "'You seem so confident! How is that?'"

Growing up, Sidibe noted, was not always a walk in the park. The American Horror Story star talked about grade school, when she struggled to make friends. At home meanwhile, Sidibe's parents never explicitly told her she was smart, instead instilling the idea that she should lose weight so they could be proud of her. This emotional manipulation took a toll on the young woman, whose response was "always to eat more, because nothing says, 'You hurt my feelings. Fuck you!' like eating a delicious cookie."

In spite of this, Sidibe said she was able to draw inspiration from other sources, including her aunt, Dorothy Pitman Hughes. Every day Sidibe would walk past the now-famous photo of Hughes and Gloria Steinem standing together, their fists raised in feminist and black solidarity.

"Powerful. Confident. And every day as I would leave the house, I would give that photo a fist right back. And I'd march off into battle," Sidibe said through tears.

So Sidibe is confident — as she should be — but even confident women have a hard time blocking out the constant fat-shaming that happens almost every time she steps into the public eye.

It's hard to get dressed up for award shows and red carpets when I know I will be made fun of because of my weight. There's always a big chance if I wear purple, I will be compared to Barney. If I wear white, a frozen turkey. And if I wear red, that pitcher of Kool-Aid that says, 'Oh, yeah!' Twitter will blow up with nasty comments about how the recent earthquake was caused by me running to a hot dog cart or something.  And 'Diet or Die?' [She gives the finger to that] This is what I deal with every time I put on a dress.

Just because Sidibe has the confidence to ignore and even tear down her critics doesn't make fat-shaming acceptable. As Mary Elizabeth Williams wrote, "Very few people who are mercilessly picked on the way Sidibe routinely is have her clout. Most people who are bullied, unfortunately, don't have a snappy comeback about how awesome their lives are. I may be wrong, but the list of Oscar-nominated overweight African-American women who are on hit TV shows is, by my count, one."

Ultimately, the biggest takeaway from Sidibe's speech may be its ending, in which the young woman proved that there can be truth in the old adage, "What doesn't kill me makes me stronger."

"I'm grateful to [my parents], and to my fifth grade class, because if they hadn't made me cry, I wouldn't be able to cry on cue now. If I hadn't been told I was garbage, I wouldn't have learned how to show people I'm talented. And if everyone had always laughed at my jokes, I wouldn't have figured out how to be so funny. If they hadn't told me I was ugly, I never would have searched for my beauty. And if they hadn't tried to break me down, I wouldn't know that I'm unbreakable."

Let that be a message to haters and an encouragement for those who haven't yet found the voice to shout down their bullies.