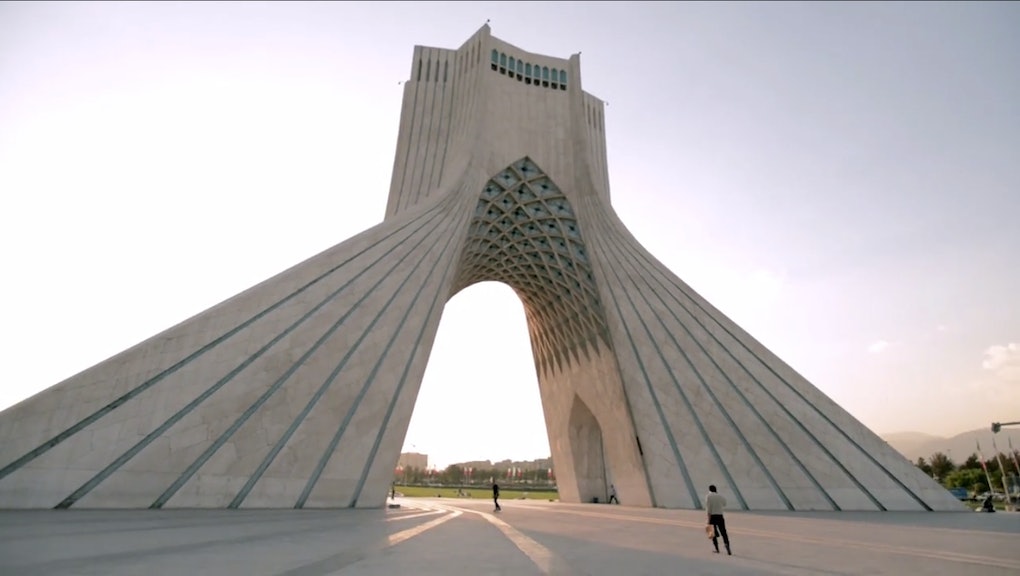 Working out of a scrappy, gray-walled space with the words "Welcome to Javad's skatepark" spray-painted in a corner, 27-year-old Iranian engineer and skateboard enthusiast Mohammad Javad (MJ) Rahimi painstakingly manufactures handmade skateboard decks out of his home in Tehran. One of approximately 100 skateboarders in Iran, Rahimi was eager to invite professional skateboarders to explore and discover the small but vibrant skating community in the conservative country.

As a country that isn't usually associated with skating, it's easy to see why German videographer Patrik Wallner and his eight-man skateboarding crew would be drawn to skate and film in Iran. Often seen and portrayed as closed off from the rest of the world, western media and the global audience have an appetite for seeing what life is like "behind the veil" – often times showing surprise at just how, well, normal life is in Iran.

The Persian Version, a beautiful, 30-minute film shot and edited by Patrik Wallner, however, isn't your typical Iran story. Rather than highlighting young Iranian skaters through the overused (and patronizing) "they're just like us" narrative, the video focuses on the shared passion and determination of local skaters.

Following the crew of professional skaters as they zig-zag their way across the conservative country, the video is the latest skate documentary in Wallner's "Visualtraveling" series exploring Iran, Azerbaijan, Georgia and Turkey, as experienced by the eight-man skateboarding crew.

Capturing stunning footage of skaters rolling, gliding and carving their way through the streets of Tehran, this video captures the region in a unique way. The skaters navigate through the city's busy streets, back alleys, parks and public locations, including one of Tehran's state-funded skateparks and Azadi Square, all while doing kickflips and tricks.

"Iran is under sanctions right now and it’s really hard for them to import anything from the West," said Kenny Reed, one of the skaters in the video. "This kind of put the skaters in a position where they were forced to figure out a way to make their own boards. If they didn’t have MJ making those boards, I couldn’t see the scene getting any bigger at all."

The United States and other countries have imposed several international sanctions on Iran in response to the country's prohibited nuclear activities over the years, targeting its key energy and financial sectors. Iran's once vibrant tourism sector has also suffered due to the country's political and economic isolation, as well as warnings from western governments.

Although all crew members managed to secure tourist visas to Iran, the Iranian government refused to allow the two U.S. citizens to skate anywhere outside designated skateparks in the country. The non-Americans, on the other hand, were free to skate across and test out the region's urban topography with a guide's supervision.

Despite the visa glitches, however, the crew shared some tricks that their Iranian comrades had never seen in person, interacting with them and filming them through the perspective that they share a common passion for skating, rather than viewing them as "others" to be observed and studied. "They're doing [a] nollie hardflip noseslide," said skateshop owner Alireza Ansari in the video. "It's fucking sexy, you know ... I only ever saw that in videos." One Iranian skater even rode a skateboard made entirely of stainless steel instead of a wooden deck.

In addition to providing another reason for people outside of Iran to rethink and evaluate their perspective of life in the country and the mood on the ground, this video highlights the universality of and deep passion for a sport that was, in the 1970s, often associated with a rebellious youth subculture in the West. It also captures the beauty and need to sometimes focus on the universal nature of something — whether it be a passion, skill or idea — that translates and resonates beyond boundaries, politics and even culture.

"You've got to really be loving it, maybe even more than we do, to really stick to it, especially given the lack of governmental and social support for skating in Iran," said French skater Michael Mackrodt, one of the skaters on the trip. "I find it really touching."