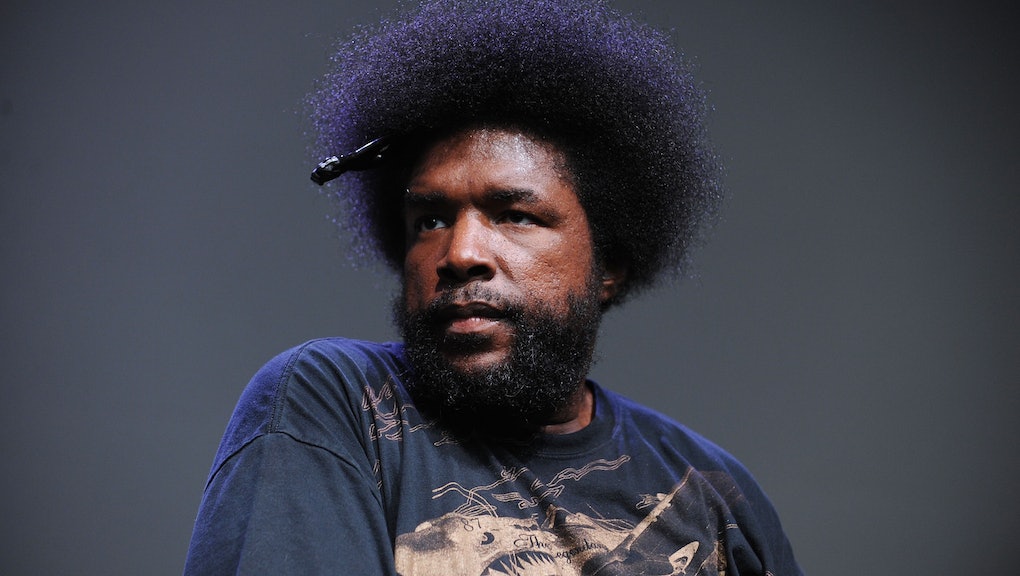 Hip-Hop May Have Failed Questlove, but It Saved Me

There's nothing like showing up 2,000 miles from home for your first day of boarding school and having a rich white kid from Beverly Hills tell you you're not black enough. If you're a black kid from a white suburb, you get that a lot. It's the kind of thing you hear when hip-hop becomes synonymous with black music. It's the kind of thing you hear when 80% of that music is purchased by the white suburban kids who then think they know what it means to be black.

Recently Questlove, the leader of famed hip-hop group The Roots, has been publishing a masterful and much-discussed six-part examination of how hip-hop failed the black community. The crux of his argument is that hip-hop has become synonymous with black music — and that's not a good thing. When hip-hop became dominant, it formed the popular idea of what it means to be black; an idea that excluded black folk musicians like Tracy Chapman or rock musicians like Living Colour. "These days, nearly anything fashioned or put forth by black people gets referred to as 'hip-hop,'" he writes. It locked black people into a set cultural role, and when it became mainstream, it lost all its ability to fight back against an oppressive, materialistic mainstream culture. His argument is complex, but it's basically this: Hip-hop's popularity made a rigid idea of blackness that limits actual black people — the mode of blackness that had kids telling me I wasn't black enough.

But when I was growing up, hip-hop didn't fail me. It saved me.

When I arrived at boarding school, I was constantly told I wasn't really black. Kids would compare me to Carlton on The Fresh Prince of Bel Air because of the way I talked or mock the fact that I tried out for the lacrosse team. I didn't wear du-rags or baggy clothes (except for a brief period when I was into JNCOs). I was just a kid from the suburbs, and I lost my sense of who I was.

At first, I didn't know if they were right or wrong. African-Americans who grow up around white people often face pressure not to "act white," which, in school, means being disinterested in education and more invested in the extracurriculars associated with hip-hop. According to a study of 90,118 students from grades 7 through 12 published in 2005 by the National Bureau of Economic Research, "Popularity peaks at a 3.5 GPA for black students" while "whites continue to gain popularity as their grades increase." That's only a small part of why the high school graduation rate among blacks is only 62%, compared to 80% for whites.

As a pimpled and chubby high school freshman attending boarding school 2,000 miles from home, the confidence to fight those expectations was in short supply. Hip-hop didn't oppress me, though: It gave me that confidence. It was impossible to listen to The Roots' 1999 album Things Fall Apart and not feel it. I started waking up before the rest of campus and going on three-mile runs with Questlove's own "Adrenaline!" spurring me on. I was proud to opt out of my dormmates' three-chord stable of Blink-182, CKY and New Found Glory; I had the intricate and philosophical tracks on Nas' Stillmatic instead. I took to heart the Nas lyrics from "Rule," "With survival of the fittest, every day is a chal' / I would think I'm a part of U.S.A. and be proud."

The next year, I began participating more in class, thanks to Mos Def's Black on Both Sides. The album, one of my favorites to this day, cut through the generic pop sounds and lyrics Puff Daddy was pumping into hip-hop. The lyrics were more than mere boastful materialism and self-promotion — they were critically aware and socially incisive. Songs like "Mathematics" and "Mr. Nigga" made me feel like I was a part of the black community's drive to be understood by a broader culture: They brought the day-to-day realities of the inner cities (poverty and police brutality) to life when before I'd only heard such issues discussed around our family dinner table with an academic distance.

Where before, in class, I'd kept quiet about racial questions because I was all too aware of my status as the only black student in class, now I persisted. I asked about affirmative action; about legal bias affecting the history we were learning. I was unashamed to talk about race and confident that my experiences were just as valid as anyone's. I gained the confidence I lost when people told me I wasn't black in the ways hip-hop promised. I found my own swag, especially when people told me I didn't have it. As Kanye says, "Everything I'm not made me everything I am."

Hip-hop may have created a dominant narrative of blackness, but it was invaluable for kids like me — and there are a lot of kids like me in black America. Hip-hop didn't fail me because it made my prep school friends think of me in a certain way; it saved me because it helped me understand my roots and gave me the confidence to move away from what people might assume. If it taught other people to think of me in one particular way, that's on them. Hip-hop taught me to be however I wanted.