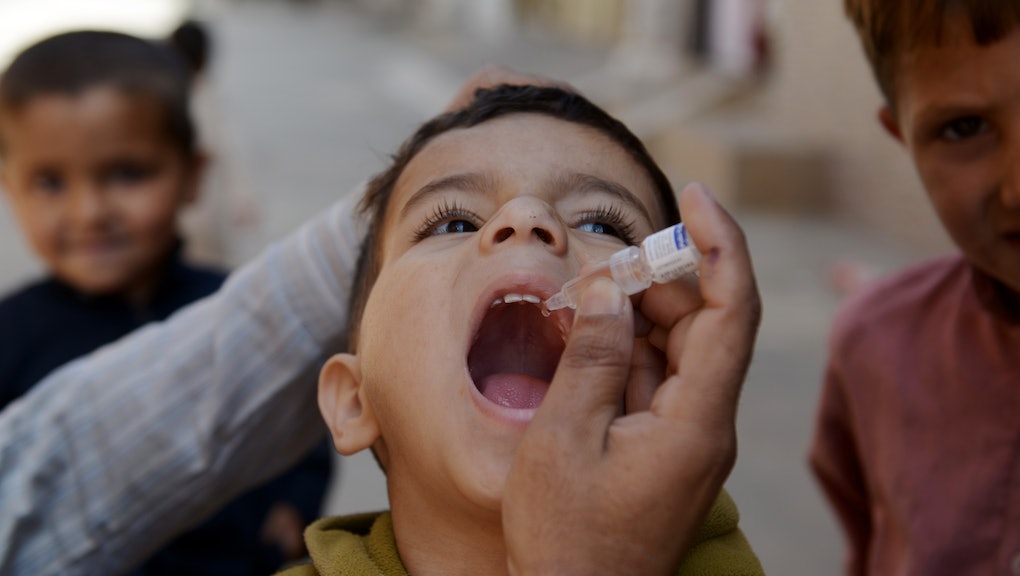 The news: Just a year ago, eradicating the polio virus around the world by 2018 seemed like a real possibility. The disease, which at its height in the 1940s and 1950s killed or paralyzed half a million people annually, was only diagnosed in 417 cases in 2013. Only three countries — Afghanistan, Nigeria and Pakistan — were considered polio-endemic this year, as opposed to 125 countries in 1988.

But now, all of this progress is in danger. On Monday, the World Health Organization (WHO) declared a "public health emergency," reporting that despite a successful 25-year vaccination program, polio has spread to 10 new countries.

There have been 68 new cases of polio since the beginning of 2014 — almost three times as many as this time last year. "If unchecked, this situation could result in failure to eradicate globally one of the world's most serious vaccine preventable diseases," the WHO said in a statement.

Why is this happening? Adult travelers, according to the WHO. Though polio usually affects children under the age of five, adults can still carry and transmit the disease. Officials suspect that people visiting countries where polio has not been eradicated are spreading the disease across borders. Last year, 60% of polio cases resulted from the international spread of the virus.

It's also important to keep in mind that polio is spreading in unstable regions without enforced vaccination programs. Right now, the virus is concentrated around the Middle East and North Africa, but it has also reemerged after a 15-year break in Syria, where immunization rates have plummeted due to the "severe interruption of public health services and to the conditions in which the people are living" wrought but by the country's ongoing civil war.

Children in these areas are not recieveing vaccinations, and adults are not receiving their booster shots either. And by carrying the virus across borders, these infected travelers are undoing decades of progress.

What can be done? By declaring a global health emergency — the second time the organization's ever done so — the WHO is demanding an aggressive anti-polio policy. The mandate calls for the three countries mainly responsible for spreading the disease — Pakistan, Syria and Cameroon — to inoculate all of travelers who enter their borders and to continue vaccinating children. No one can leave these countries without proof of vaccination.

While these guidelines aren't legally enforced, they may be the best bet to halt the spread of the virus and minimize further infections across the globe. "Things are going in the wrong direction and have to get back on track before something terrible happens," said Gregory Hartl, a WHO spokesman. "So we're saying to the Pakistanis, the Syrians and the Cameroonians, 'You've really got to get your acts together.'"