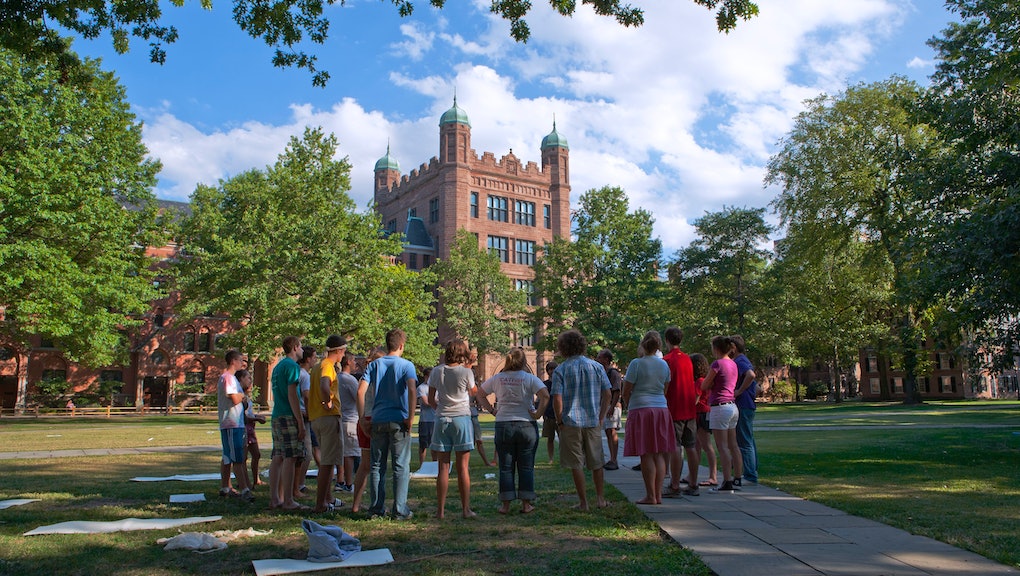 Every year, hundreds of thousands of high schoolers begin the exciting but terrifying process of applying to college. While most Americans agree that a college degree leads to a better life (and could be worth as much as $831,000 in the long run), unless you're this kid, your chances of getting into top choice Ivies and prestigious equivalents might be tough.

Three percent? That's nothing. That's minuscule. That's embarrassing. How did they possibly get such a low number? Simply by asking six questions, three related to institutional and professorial support and three related to general engagement and experience. Gallup then compared this data to their findings that 39% of college grads say they're "engaged" at work (which is 10% higher than the general population), and found that while almost 83% reported excelling in one category like "purpose, financial security, physical health, close relationships or community pride," only 11% are "thriving" in all five.

So what does this all mean? The researchers found that the type of college attended (public or private, small or large, very or minimally selective) matters far less to a graduate's post-college satisfaction than the experience and support encountered while there.

Based on all the data collected, the pedigree of the school hardly mattered in the long run. (Although colleges with more than 10,000 students performed slightly better, while for-profit schools saw noticeably worse outcomes.) Instead, the odds of "being engaged at work" and of "thriving in all areas of well-being" quickly multiplied when students enjoyed a positive college experience.

Of course, attending a big name, top-tier school arguably provides some advantages in terms of name recognition on résumés and possible networking connections. But in terms of self-reported satisfaction, the implications are minor.

Something for students to consider? This is something for prospective students to weigh when choosing a college or university, or, once they matriculate, declaring their major. However, it's nearly impossible for a student to know exactly what kind of learning environment or experience they can expect before they arrive on campus, no matter how many tours and information sessions they sit through.

While the Gallup-Purdue study showed no correlation between a school's level of prestige and its level of student engagement, it also didn't show that one type of school is necessarily better than another, meaning a lot of the enjoyment and engagement a student can gain from their education cannot be pre-planned or predetermined, but almost happens as a matter of chance. You can't be sure that you're choosing one school over another because you'll have a "more engaging" time there.

Instead of expecting the students to create their own perfect experience, it would make more sense for the burden of engagement to fall on the professors and institutions themselves. No matter how hard a student tries, she won't be able to have "at least one professor ... who made [her] excited about learning" if the professor isn't interested or doesn't care about the student as a person. After all, it should be the profession's mission statement: What's an undergraduate professor's job if not to teach and engage with the students?