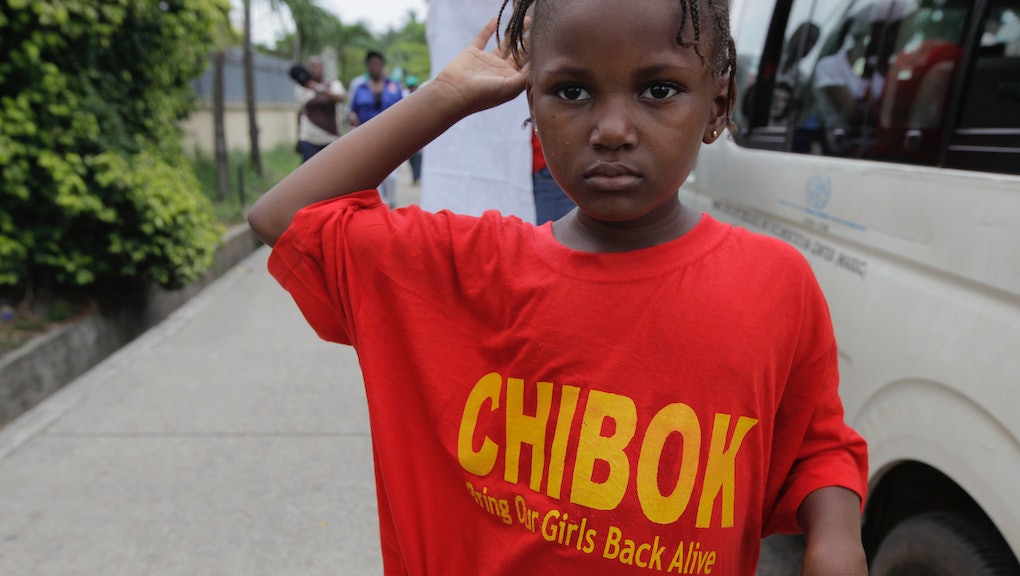 Almost three weeks have passed since scores of girls were kidnapped in Nigeria, and the international media is scrambling to catch up with the story in sensational style by trying to find a way to make audiences relate to the more than 200 abducted from their dormitory in the middle of the night.

"[We are] going to be ALL over this story, all the time from now on ... somebody has to," tweeted CNN anchor Jim Clancy. A write-up in Ms. magazine even asserts, "We are all the kidnapped Nigerian girls."

The abduction is not "our" story. It is not an example of a clash between "Islamic radicalism and modernity." It's not even necessarily an example of the pitiful global state of girls' rights, as Boko Haram continues to carry out bombings and massacres indiscriminate of the targets' gender.

It's time to take a step back and listen to what the girls who escaped abduction and the families, thinkers and professionals on the frontlines of this crisis have to say.

"As in so many other ways in Nigeria, each community has to fend for itself," writes Lagos-based journalist Alexis Okeowo. "For a while after the abduction, girls trickled back into town — some rolled off trucks, some snuck away while fetching water. That trickle has stopped."

Okeowo goes on to relay the concerns of a pastor in Chibok who had to return empty-handed from a search for the missing girls, one of whom is his own daughter: "I just don't know what the federal government is doing about it. And there is no security here that will defend us. You have to do what you can do to escape for your life.'"

These voices have been drowned out by a chorus of talking heads inserting themselves, their agendas and their critiques of the West into the story.

Writing for the Observer, columnist Nick Cohen claims that "parts of the press" are apologizing for Boko Haram by failing to label all of the abductions as enslavement, and by attempting to describe the genesis of its insurgency. He also says that "left-wing journals" started the apologist trend in their effort to engage the group critically.

Cohen blames this on a self-obsession of the West, which at once believes its military might can solve any ill and believes that its policies are responsible for all of them.

But Cohen's op-ed, instead of addressing the complexities of Boko Haram and perhaps the need for greater international outrage, engages in the same self-obsession that he's criticizing.

Even more troublesome are the think-pieces that contain the same occidentalism and fail to provide any insight into the complexities of the conflict between Boko Haram and the Nigerian government, all while urging a moral call to action.

Over at the Guardian, "Vagenda" cofounder Rhiannon Lucy Cosslett writes that the real problem for the families whose daughters who have been missing for weeks and may have been sold into sex slavery is that not enough Western feminists are involved.

"As Western feminists, we have a duty to stand in solidarity with these girls, their mothers and their fathers," Cosslett writes. Her main idea of solidarity is leveraging white women's social media clout to promote #BringBackOurGirls and pressure Western governments for intervention. Never mind the fact that women in Nigeria, one of the most Twitter-active contingents on the African continent, have been using the hashtag themselves, as well as marching to the capital to demand government action, in spite of veiled threats against their safety and unwarranted detention.

Cosslett goes on to yearn that "these girls" had "our freedoms" to fight the pithy little feminist battles of the West, and trails off with the incongruous thought that retweets aren't enough but good ol' feminist liberation is. Because for Cosslett, what matters is the girls' ability to chat idly at a bus stop just like her, not the infiltration of a militant group into almost all aspects of society and government.

The New York Times' savior-in-residence Nicholas Kristof continues the trend of painting in broad strokes, writing a very familiar story: that the attack is one on girls' education, and Western intervention is not only needed but being demanded by victims' families.

While it is true that family members of the kidnapped girls and notable Nigerian voices like Nobel Prize winner Wole Soyinka have said the country needs international intervention, doing so, particularly through a clicktivism centered on Western liberal feminism and girls' right to education, is fraught with consequence.

This is a story that is at once entirely about these girls — their names, their want for education, their desperate families and an idle and untrustworthy government that's failed them — and also not about them at all, but about the corruption and ineffectiveness that has made fighting Boko Haram unimaginable and disastrous, an unwillingness of the government to admit fault and the tactics of abduction, rape and forced marriage that are repeatedly used in warfare because the world fails to condemn them swiftly and absolutely.

The one thing it is not about is the political platforms of these Western pundits.