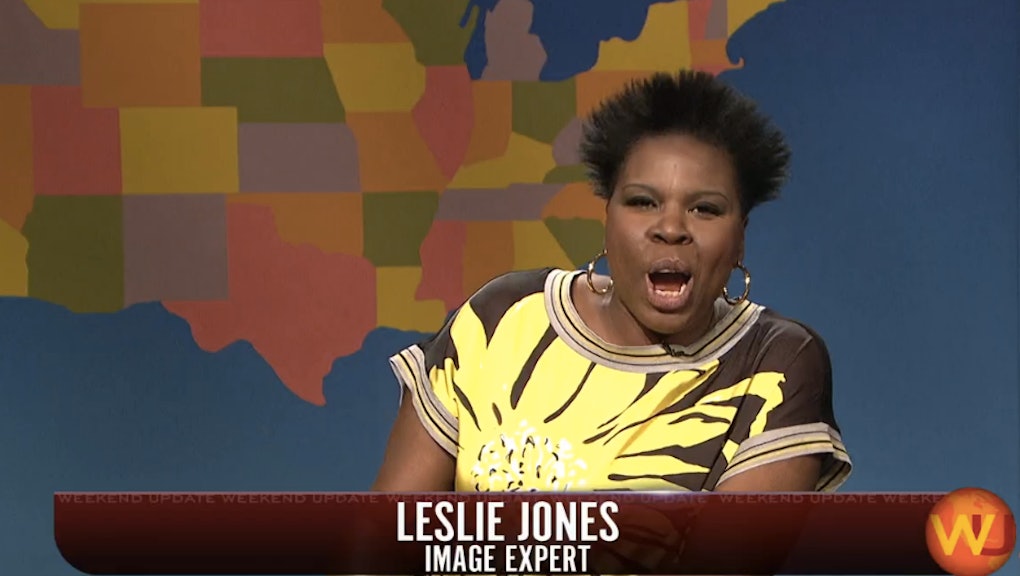 'SNL' Promised More Diversity. This Slave Joke Fail Shows How It's Screwing Up

Well, possibly — but definitely not if your audience doesn't get what you're talking about in the first place. Leslie Jones, the stand-up comedian turned Saturday Night Live writer, performed a monologue on Saturday Night Live's "Weekend Update" last weekend commenting on PEOPLE Magazine naming Lupita Nyong'o their most beautiful person. In the monologue, delivered to uproarious applause from the SNL audience, Jones compared herself to Nyong'o, asking the "Weekend Update" host to pick between her and the 12 Years a Slave star.

"The way we view black beauty has changed," Jones said. "Back in the slave days I would never be single. I'm six feet tall and I'm strong!"

While protesting that "I don't want to be a slave," Jones suggested that "back in the slave days my love life would have been way better. Master would have hooked me up with the best brother on the plantation and every nine months I'd be in the corner having a super baby."

The backlash to Jones' joke was swift — and fairly brutal.

Clearly, true diversity is a long-term project at SNL. Indeed, the weekend comedy show added Jones in the aftermath of a public campaign demanding more women of color.

And it is fair to say the show needed more diversity. Over the course of the show's 37-year history, African-American men played black women at least 32 times. Before Sasheer Zamata joined the show earlier this year, there hadn't been a black female cast member in six years. But what Jones' performance highlights is that hiring black actors doesn't in itself change a space that has been historically white and that has catered to predominately white audiences for decades.

Ebony's Jamilah Lemieux noted that while not interested "by the concept of putting on a 'good' face for white folks," black actors should not be "making light of their pain for an audience of white folks, or anyone else, for that matter." Similarly, XoJane Managing Editor Rebecca Carroll noted the uncomfortable juxtaposition of Jones' jokes and her audience (and co-workers). In the current SNL context, Jones' skit "felt not so much like pushing the boundaries of political correctness as pandering to Lorne Michaels and the white SNL cast and audience."

This doesn't mean that some people didn't find the routine funny. In fact, quite the opposite. On MSNBC's The Reid Report, fellow comic Jackie Fabulous came to Jones' defense. "I know Leslie, I've seen her perform hundreds of times and she's aggressively funny," Fabulous said.

"That's her job. They've said way worse things on 'Weekend Update' throughout the years. She was amazing; she was hilarious."

Fabulous is right — worse things have been said on "Weekend Update." However, the monologue played off stereotypes of African-American women that many people are tired of hearing. It also conjured up images of subjugation that arguably aren't too funny, either, and which many in the audience may have missed.

A little history lesson may be helpful here.

Thirty-nine years after film critic Roger Ebert called the film Mandingo "racist trash" because it continued the hypersexualization of slaves, there was Jones, using the label for comedic affect. Mandingo debuted not too long after a black woman, Saartjie "Sarah" Baartman, stripped of her name, was finally laid to rest after being put on display in a Paris museum for a century and a half as the "Venus Hottentot."

There is humor in the African-American female experience, but context is vitally important. Jones and SNL ignored much of this when it decided to run with jokes that referenced — but did not explain — disparaging past narratives that inform black female sexuality.

What is potentially most damning are the opportunities that SNL missed. Having Jones on the show could have been a platform to spark insightful commentary on recent controversies, such as disgraced Los Angeles Clippers owner Donald Sterling. Instead, the show decided to link Nyong'o, and by extension all black women, to slavery in a way that serves to negate the seriousness of what happened during that period. Worth mentioning is the fact that Nyong'o is of Mexican and Kenyan decent, so her ancestors were unlikely to have had much contact with the Mid-Atlantic slave trade. Yet another contextual fact the show glosses over in the name of comedy.

If this is SNL's big diversity plan, it needs to reevaluate. This isn't inclusivity — it's laziness. Diversity doesn't mean giving lip service to a topic that seems inclusive. It means doing the work to explore ways to really make a minority experience universally funny, without marginalizing that experience in the process.