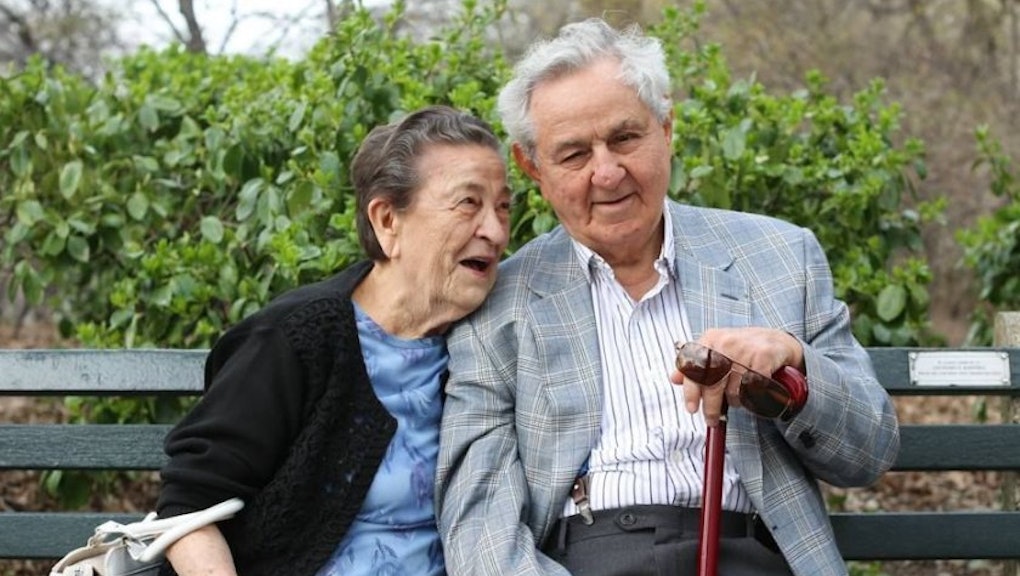 Since 2010, Humans of New York has warmed hearts far beyond the Big Apple. The blog is a global phenomenon with creator Brandon Stanton touching on countless themes: loss, poverty, strength — the list goes on.

Stanton's willingness to photograph and present each of his subjects without judgement results in an intimacy that has bred a cultural touchstone for our generation. If you follow the blog closely, you'll notice one subject in particular surfaces again and again: love.

Stanton has chronicled countless types of amour. The result is a diverse array of posts that open up readers to all types of romance.

Here are 26 of HONY's most beautiful love stories that showcase the beauty of love and its changing forms.

"I've got a lot of faults. I'm sure I'm not easy to live with. I'm not the best communicator. And I'm sure it's not very cool to see your man crawling on the floor of a hotel room. But she loves me."

"We were best friends in high school."

"From the outside, Metal looks very aggressive and nonconformist. But that's just because we get all our aggression out in music, and not by doing some other shit. It's actually a very loving community. No matter where you're from, or how much money you make, a metalhead is a metalhead."

"I see something in animals that I don't see in humans. They have a focus and energy that humans don’t have. They just want to live. They aren't trying to impress anyone. They aren't trying to hurt anyone for no reason. Even the rat you see in the subway — his only thought is finding the food he needs to survive. Animals only want to live. It's humans that demand more than they need."

"What was the saddest moment of your life?"

"What's your favorite thing about her?"

9. Fast love doesn't have to be fleeting.

"We met in August, started dating in September, got engaged in October and married in November. That was 43 years ago."

"A coworker asked for my number the other day. My friends overheard and said: 'He must have a thing for Indians.' I was like, 'Or maybe I'm just really fucking cool.'"

"If you could give one piece of advice to a large group of people, what would it be?"

12. But so can significant other-love.

"We're coming up on a year of marriage."

"He's all the man a girl could ever want. If I want to see a movie, and he doesn't want to see it, we go and see it."

"Ladies not yet rich but very well off will also be considered."

"These two were acting like complete teenagers. When I walked up, she was nuzzling her head against his shoulder. She giggled the entire time I talked with them, while he kept a big goofy grin on his face. And whenever I asked about their relationship, she clutched his arm, looked at him just like this, giggled, then said: "We're not telling!""

"The more times I fall in love, the less sure I am about love."

17. It's also okay to surprise people.

"What was the happiest moment of your life?"

18. Because even surprisers love surprises.

Then she leaned toward me and whispered: "She doesn't know this yet, but it's our anniversary this weekend, and I've just covered the entire house in sticky notes."

"His owner told me that according to a Native American myth, dogs with different colored eyes can see both heaven and earth."

Me: "What's your favorite thing about your brother?"

21. And someday, everyone is bound to feel loss.

"I've had two loves. One of them died. The other left me for another man."

22. But laugh a little, and you'll feel better.

23. Or touch foreheads — that usually works.

24. In short, love can be a great adventure.

"He kidnapped me last year and has been taking me around the world ever since."

25. Full of twists and turns

"What's the hardest part about being a dad?"

26. When you go on yours, remember to take lots of pictures.