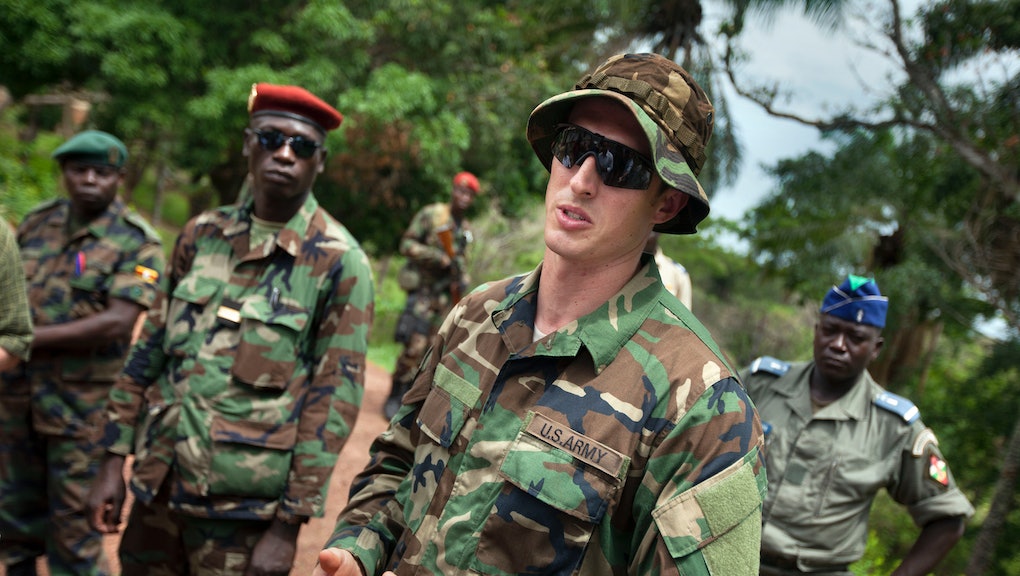 U.S. Special Forces Are in Nigeria – But Not For Those Missing Schoolgirls

The news: It's been three weeks since hundreds of schoolgirls in Nigeria were kidnapped by the terrorist group Boko Haram. Public and international fury at the Nigerian government's apparent inability to address the situation has grown, and amid mounting criticism and protests over his government's inability to locate and rescue a single girl, Nigerian President Goodluck Jonathan announced on Tuesday that he has accepted America's offer to send special U.S. military personnel to help with rescue efforts.

"In the short term our goal is obviously is to help the international community, and the Nigerian government, as a team to do everything we can to recover these young ladies," President Barack Obama told NBC News. In the longer term, he said, "We're also going to have to deal with the broader problem of organizations like this that can causes such havoc in people's day-to-day lives."

The Department of State is now putting together a "coordination cell" to assist the Nigerian government, but it might be easy to overlook the fact that this is far from their first rodeo; in fact, there's already a U.S. special forces unit in Africa right now, hunting down a notorious warlord who has kidnapped not hundreds, but thousands of children. His name: Joseph Kony.

What is going on? In March, Obama informed Congress that he would begin deploying more Special Operations forces and military aircraft to Central Africa. There, they will assist the African Union military task force to track down Kony, the leader of the infamous Lord’s Resistance Army (LRA).

And it certainly seems like the right time to press forward. Kony's forces have been dwindling down for some time, and it's been estimated that he only has 250 fighters left now. The organization has lost its top commanders, and LRA victims have dropped more than 75% since 2010. Kony himself has not been sighted in a while, which many take as a sign that he is either sick or in flight, making it all the more pressing to capture him before he disappears.

Though Kony — who reportedly kidnapped around 30,000 children to serve as soldiers in his militia — does not pose a direct threat to the U.S., Obama is viewing this as "a useful way to build military and political partnerships with African governments in a region where al-Qaida and other terrorist organizations are rapidly expanding, as well as to demonstrate adherence to human rights principles," according to the Washington Post.

What does this have to do with Nigeria? Much like with Kony, Boko Haram is a regional threat with limited operations. Still, the al-Qaida affiliate — whose name means "Western education is sinful" — is a violent, destabilizing force in the country and is attempting to institute sharia law. As important as it is to rescue the kidnapped girls, this operation provides an opportunity for the U.S. to counter an anti-Western agenda — and as Obama himself said, those long-term goals have to be kept in sight.

And while Obama has used his executive power to act unilaterally in the hunt for Kony, he seems to have a lot of political support for his intervention in Nigeria. The move to send special troops came after all 20 female U.S. senators sent a bipartisan letter to Obama to ask him to do more. "Every single woman immediately signed that letter, because she wanted to lend her voice to the international outrage," said Sen. Barbara Mikulski (D-Md.). "The women of the Senate won't be quiet."

Whatever political advantage Obama may gain from these interventions, the upside is that at least something is being done. The Nigerian government has been battling criticism since the Boko Haram operation began, and the exhaustive search for Kony has been going on since the International Criminal Court issued a warrant for his arrest back in 2005 — while the U.S. stands to gain from bringing these operations to an end, its assistance might be the key factor in bringing these criminals to justice.