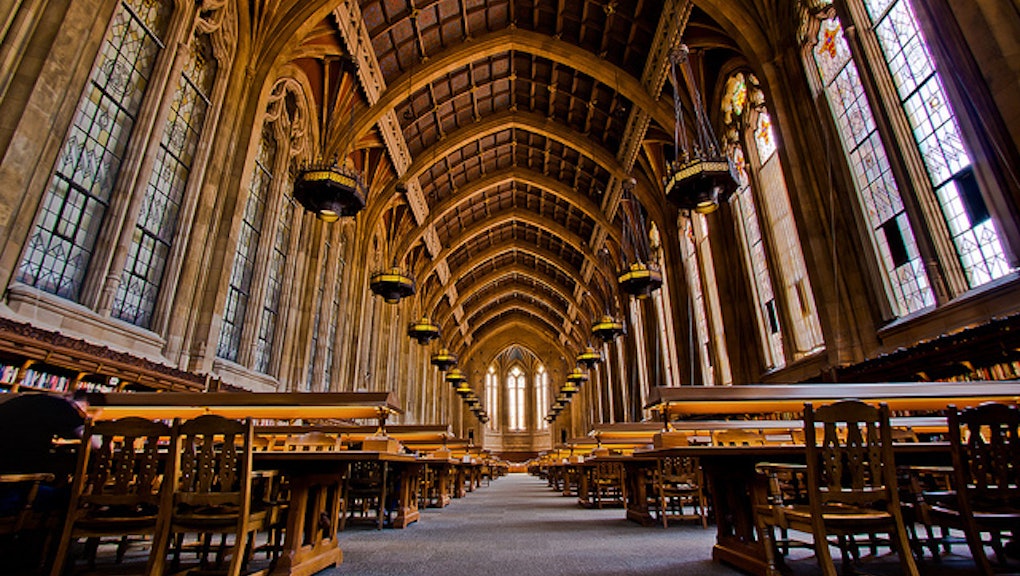 From small towns to big cities, libraries are the physical and emotional center of a community. They're where people learn to read and where they continue to read throughout their lives, and there's something undeniably beautiful about the idea that the world's greatest words are all housed in central buildings.

From historic structures in Boston and Los Angeles to newer, architectural marvels in Seattle and Minneapolis, libraries are cultural hubs elevating their communities while educating them as well. And the masses agree. According to a new Pew study, 90% of respondents consider libraries key to their communities.

In honor of the enduring importance of libraries, here are 10 very different examples of amazing local library buildings across the United States, from 18th-century treasures to buildings that opened just a decade ago. These beautiful edifices serve as community pillars and prove that no matter how many e-readers we all have, every community still needs a library. Of course, this is only a tiny sampling of the many libraries that are thriving right now as cultural hubs and community centers, but this selection of libraries epitomizes the cultural weight of these book homes. And they're beautiful too.

Looking at photos, you might never guess that the public library in Gilmanton Iron Works, N.H. is less than five years old. But volunteers worked hard to build the town's first library in a relocated antique post-and-beam barn.

The library got a major boost in March, when 50.8% of Gilmanton citizens voted for the first time to fund the library for the year. Side note: Although it's likely that you've never heard of it, tiny Gilmanton does have a literary claim to fame. The scandalous '50s best-seller Peyton Place was set in a fictionalized version of the town.

The nation's oldest lending library, the Redwood Library and Athenaeum, is one of 16 remaining membership libraries in the U.S. Predating the public library system we're familiar with today, membership libraries are open to all, though patrons pay dues in order to check out materials and attend programs. Barring part of the American Revolution, when the library was converted into a British officers' club, the Redwood has been in continuous use since its 1750 opening.

Tiny Proctorville (population: 117) was once the smallest town in America to have its own public library. Open only two afternoons a week, the W.R. Surles Memorial Library is located in a petite 20-foot-by-30-foot building housing about 2,500 titles. That may not sound like much, but that averages to more than 20 books per resident. The building was added to the National Register of Historic Places in 2009.

Founded in 1838 and formally dedicated in 1902, the small public library in Yazoo City, Miss., has withstood its share of disasters, including a 1904 fire that destroyed much of the city and a more recent 2010 tornado that wreaked havoc in the city. Built by Fannie Ricks as a memorial to her late husband, the library remains highly active. Its small staff even includes an official local history librarian.

A solemn, cathedral-like house with roughly 2 million volumes, the enormous Gothic Suzzallo Library is the most easily recognized building on the University of Washington's Seattle campus. The much-photographed Graduate Reading Room — "Combine Hogwarts and silence and you have the reading room," according to the university — is 250 feet long, 65 feet high and completely quiet.

As Salt Lake City has grown, so too has its library. The original building became a planetarium in the 1960s and the library's second location is now the Leonardo, a science and culture museum. Opened 11 years ago, the third incarnation of Salt Lake City's public library was designed by Canadian architect Moshe Safdie. Despite numerous tragedies — a bomb scare not long after it opened and at least four suicides over the years — the building is a visual marvel.

By 1919 steel magnate Andrew Carnegie had funded the construction of 1,689 libraries in the United States, which is why so many libraries today still bear his name. More than half the original buildings are still in use as libraries, primarily in communities that haven't grown too much in the last century. Located in the remote cattle ranching community of Lusk, Wyo., the Niobrara County Library might not be any better or any worse than the hundreds of other Carnegie libraries still operating, but its position at the center of the town exemplifies what made — and still makes — public libraries so important. Their ongoing digitization project includes historic letters, newspaper clippings and decades' worth of local obituaries.

Located at Baylor University, the Armstrong Browning Library houses the collections of the English poets Robert and Elizabeth Barrett Browning. Twice renovated since opening in 1951, the research library houses what is thought to be the world's largest collection of secular stained glass. It's also one of the most-visited tourist attractions in Waco.

Winner of the Library Journal's Library of the Year for 2005, Arkansas' sunny Fayetteville Public Library is an environmentalist's dream come true. Windows reduce need for electric light, rainwater is collected for irrigation, energy is produced from solar panels on the roof and trees removed during library construction were saved and used to build furniture. This library shows the architectural commitment to serve the community today while protecting the Fayetteville of the future.