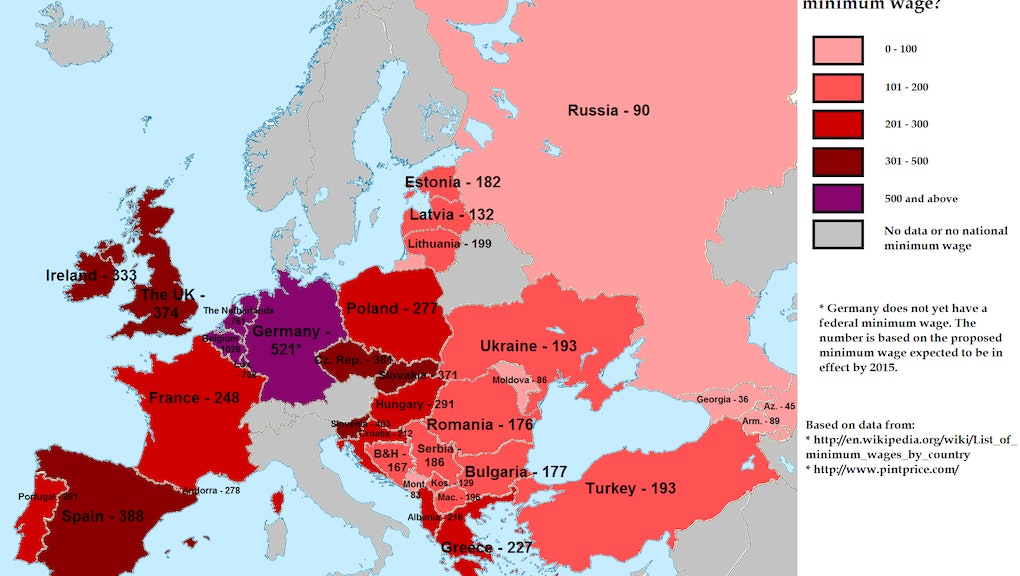 Here's How Many Beers Minimum Wage Will Buy You in Europe

This intriguing map from redditor adilu purports to show how many beers you can buy according to each European country's monthly minimum wage. Like the Economist's "Big Mac index," the logic behind the map is that for most common goods like groceries, the price of a pint relative to the minimum wage is a good stand-in for purchasing power parity (PPP), or the relative value of currency.

How many beers does minimum wage buy in America? The data is self-reported through online service Pint Price, which takes users' submissions of the price of a single drink and averages them by country. There are obvious limitations, like a small data sample and an unclear definition of what a "pint" is. But Pint Price gives us the self-reported average price of a pint in the U.S. as $3.82. At the prevailing minimum wage of $7.25 or $1,160 a month, that's approximately 303 beers, coming in well above Eastern Europe but well below the rest of the continent.

American dollars still go pretty far, with the U.S. ranking very highly in GDP per capita according to the IMF. But our minimum wage is far below many other nations' in PPP terms. Here's a graph, for example, that shows how many nations have a higher minimum wage in terms of how much you can actually go out and buy with it:

Despite the shaky methodology, this beer index actually matches up with quite nicely with existing data, highlighting northern Europe, the UK and Germany as areas of higher purchasing power for low-wage workers and higher minimum wages. There are some fascinating results, too: France comes in on the low end of this beer estimate while placing 23rd in GDP (PPP) per capita, while Spain comes in 33rd but somehow reports a larger quantity of beers purchased each month.

While our beer model isn't robust enough to stand up in, say, a congressional hearing, it seems to indicate that Americans can afford less beer on a minimum wage than their low-wage counterparts in a lot of Europe. Either way, you probably shouldn't be drinking 303 pints a month.