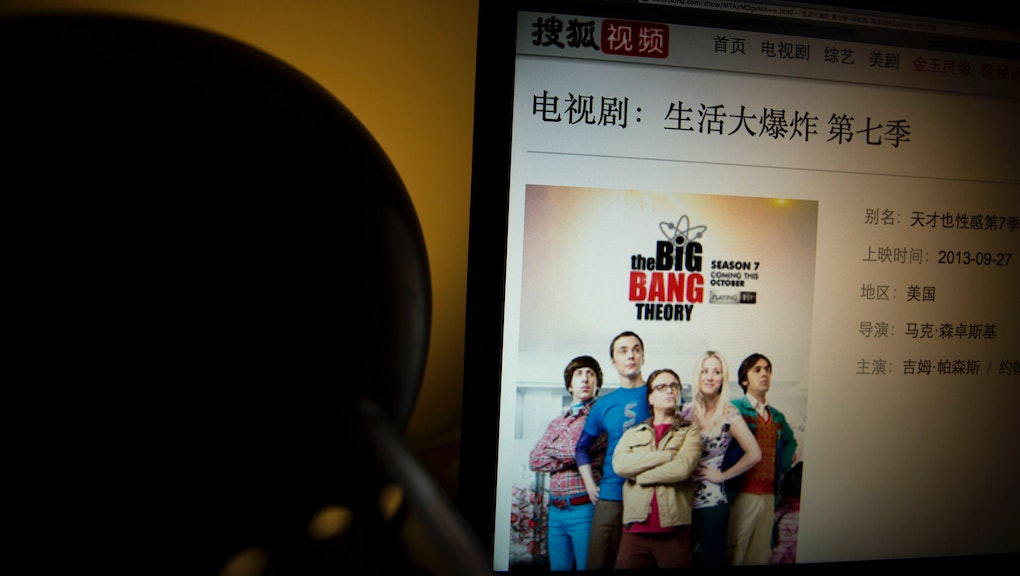 China Has Banned 'The Big Bang Theory' For the Very Reason the U.S. Loves It

The Big Bang Theory is a complete television anomaly. In this golden age of television, of streaming and Netflix and DVR, a very traditional laugh-tracked TV sitcom about a group of dorky guys and their friends managed to become the most popular American television comedy since Friends. Even more impressive is how global that hit-status has gone, as a huge fan base for the show is taking hold in China.

The show's controversial Chinese popularity made headlines recently when the Chinese State Administration of Press, Publication, Radio, Film and Television (SARFT) pulled the show from China's No. 1 streaming service Sohu, where it accumulated more than 1.3 billion views.

Speculation over SARFT's motives abound. Some say the Chinese censors want to cut down on Western influences. Some claim the government "doesn't want 'losers' to be trendy." Some, like show producer Chuck Lorre, consider the move another communist strike against individualism. Whatever the real reason, the show's "loser" characters have become beloved enough to inspire Chinese devotion and even spinoffs, including The New Big Bang Theory and Dior Man as well as a little bit of SARFT worry.

Still, the question remains as to why The Big Bang Theory is as popular as it is with Chinese audiences. New York Magazine recently took an in-depth look at why the show is so popular in the U.S., citing casting, the time slot, the network, the catchphrases, the pacing and the anti-hero, among other reasons. The show's success in China may be due to many of those same ingredients — ingredients that made Friends, a massive Chinese hit as well — but there is also a huge Chinese cultural trend that makes The Big Bang Theory just right for those audiences today.

The trend working in The Big Bang Theory's favor is the rise of the diaosi. Chinese slang for "loser," diaosi was originally a pejorative name for broke guys with no job, no girlfriend and no prospects (literally diaosi translates to "penis thread"). In recent years diaosi have gained a surge in popularity akin to the rise of the hipster in the U.S. The men of The Big Bang Theory are very much diaosi.

In a country of 1.3 billion people, where men outnumber women by the millions and economic opportunity is dwindling, the population of underdogs is rapidly increasing and the desire to see that reflected back via television is obviously increasing as well.

Image Credit: The Atlantic. More and more young Chinese self-identify as diaosi, including 91% of students and 97% of programmers.

The emergence of the diaosi in China has been called "a quiet form of protest" of the disillusioned young masses against the widespread corruption of the wealthy. It's really no wonder The Big Bang Theory makes SARFT nervous. Diaosi identify as awkward nerds, mostly males, who possess more confidence on an online gaming site than at a bar talking to a girl — a lot like Sheldon Cooper. Diaosi are also seen as a symbol of growing discontent in a slowing Chinese economy with widening inequality. In 2013, a Sohu survey found that 80% respondents aged 24-34 self-identified as diaosi, the once-insulting term now a self-effacing badge of honor.

In recent years, the Chinese market for luxury goods has also dropped significantly as diaosi have replaced the "gaofushuai" (literally: "tall, rich and handsome") as the biggest consumer market in China. In keeping with that trend, last year's most popular American TV show in China was 2 Broke Girls.

Ultimately, shows about diaosi like The Big Bang Theory are hitting a nerve in both the U.S. and China, countries that are more culturally and economically linked than ever. Viewers in both countries are shying away from shows about the "tall, rich and handsome" and gravitating toward something a little more reflective of real life — characters who are a little lost and a little dorky.

SARFT's banning of the show could be an attempt to harness this diaosi popularity, with the most plausible explanation for the ban being that the government wants more direct control, both content- and revenue-wise, over this hot commodity. Chinese finance magazine Caijing reported that CCTV, the major state-owned television channel that recently released a dubbed version of Game of Thrones, plans to air The Big Bang Theory with "healthy" SARFT-approved subtitles soon.

If the Chinese government actually wants to tamp down the revenge of the nerd, it's going to have to go much farther than just taking down a popular American TV show. The demand for these shows will not disappear overnight, and the Chinese have long been connoisseurs of the illegal download. It'll be interesting to see what the "healthy" SARFT-approved versions of The Big Bang Theory look like and if they turn down the disillusioned diaosi element.

However the new version shakes out, the U.S. and China are now bound by something perhaps even more lasting than U.S. Treasury bonds: a love of nerds.