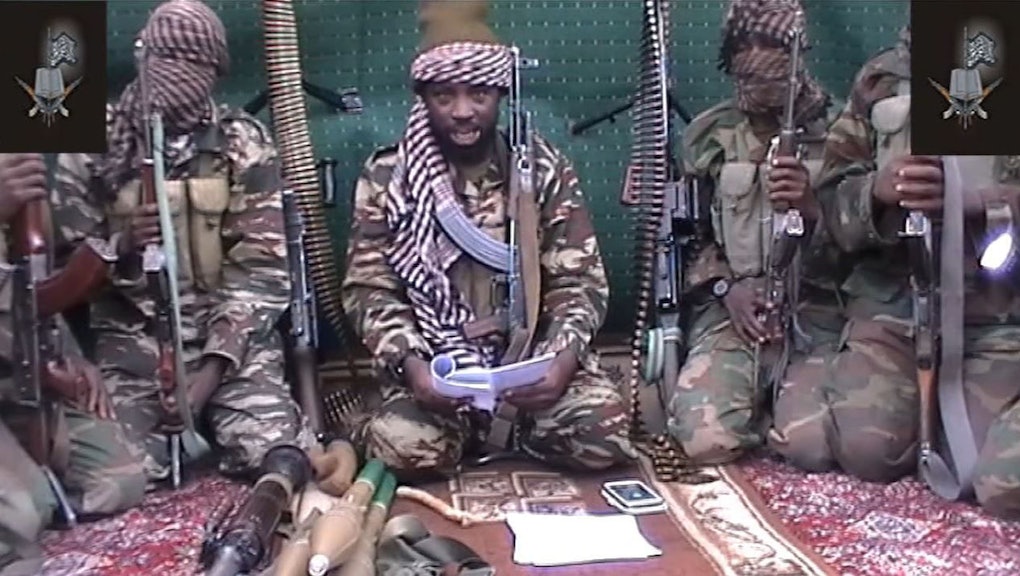 Everything You Need to Know About Boko Haram, the Group Kidnapping Nigerian Girls

The world is in disbelief. Celebrities (including First Lady Michelle Obama and Kim Kardashian), al-Qaida-affiliated chat rooms and average citizens are all shocked that more than 200 girls could be captured in the middle of the night, potentially sold into slavery and still be missing after three weeks of agony. Their shock reflects what many have long known about Boko Haram: It commits indiscriminate and unspeakable violence with near impunity, at the cost of thousands of innocent lives.

The media is grappling to make sense of Boko Haram's latest assault, wheeling out plenty of new regional "experts," resulting in misfires and repeated misinformation. It's worth taking a moment to understand more about Boko Haram from the seasoned researchers, writers, reporters and analysts who know the situation best.

More than 2,000 have been killed in violence related to the group this year alone. But the actual scale of violence is hard to quantify or attribute.

Boko Haram has been associated with several large-scale attacks in recent years, including deadly bombings and the September 2013 massacre of 44 teachers and schoolboys in Yobe state. Just this week, the group killed hundreds in the northeastern Nigerian town of Gamboru Ngala. Thousands have been killed in violence related to the insurgency, both in attacks carried out by Boko Haram and the Nigerian government's heavy-handed response, but it's hard to say just how many lives have been claimed.

Image Credit: AP. A man walks past a building burnt down by Boko Haram in Bama, Nigeria.

"The level of documentation in Nigeria is not reliable," said Atta Barkindo in an e-mail interview; he is a researcher at the University of London's School of Oriental and African Studies focusing on the militarization and impunity of Boko Haram. "[With] the manner of the attacks where human bodies are dismembered in thousands, with no DNA equipment in Nigeria, it's difficult to know the [true] figures."

Initially mainstream media painted the attacks as a Muslim sect carrying out violence against Christians, but it is important to note that most of those killed in recent years have been Muslim.

The group started as a nonviolent movement in response to poverty and government corruption.

Boko Haram traces its beginnings back to the northern Borno state, traditionally the most underfunded region of Nigeria.

"In 2001, a young Muslim cleric named Mohammed Yusuf in the northern city Maiduguri [the capital of Borno state] began preaching against the government's ills, such as corruption, lack of adequate employment and education and the persistence of poverty," said journalist Alexis Okeowo in a recent interview with Foreign Policy Interrupted.

Image Credit: Getty Images. Wreckage of a car blown up by members of Boko Haram in Maiduguri.

The group's initial aims were not violent government overthrow. Rather, it called for the government to be replaced by Sharia law, and for its full and correct enactment in the states that had incorporated it into their penal codes.

In the early years, Boko Haram leaders "had a cordial relationship" with the state government in Borno, if not the federal government, said Barkindo. "For example, Yusuf was a member of the Sharia Implementation Committee of Borno state. Most Boko Haram leaders were part of the political thugs used by politicians to confront their rivals in 1999 and the 2003 elections."

No, their name doesn’t mean "western education is sinful."

Yusuf blamed the ills facing Nigerians on western education. "Yusuf and like-minded clerics recruited followers who burned their college diplomas in solidarity," said Okeowo. "Most imams and Islamic scholars in Maiduguri openly disagreed with his teachings."

Given this component of Yusuf's preaching, it makes some sense that media has picked up the meme that the group's name translates to "western education is sinful" based on the premise that boko was derived from the English word "book."

Dr. Paul Newman, an expert in the Hausa language, contends that boko translates to something more like "inauthentic" or "fraud."

Journalist Dan Murphy details how the U.S. National Counterterrorism Center and "polemicists like the anti-Islam activist Pamela Geller" have helped propagate the mistranslation.

The different in language here is slight, but has helped set up a trope that this is about Islam, the West, or girls' education, which are not really the group's focus.

A law enforcing bicycle helmets indirectly spurred Boko Haram into tactical violence, and led to it splintering off into the structure we know today.

It was a 2009 Borno state ban on riding bikes without helmets, likely combined with mounting violence between Christian communities and frustration with police corruption, that helped things come to a head between the government and Boko Haram.

Nigerian blogger Chxta described the events in a detailed history of the group posted back in March. On the way to a funeral about five months after the ban took effect, a number of Boko Haram members were stopped by the police for not wearing helmets. An argument ensued and shots were fired. The group retaliated, killing several policemen in northeastern states, and took control of Borno's capital. The army was called into the town and captured many Boko Haram members, including Yusuf, and handed them over to the police.

Yusuf was executed while in police custody. Both human rights groups and members of Boko Haram condemn it as an extrajudicial killing.

Yusuf's early work won the group both moral and financial support among sectors of the public, as well as some political players. Nigerian President Goodluck Jonathan has even claimed that presently Boko Haram members are in the upper echelons of Nigerian government and law enforcement.

After Yusuf's death and the concurrent arrest of hundreds of its members, Boko Haram scattered and regrouped.

Even when he was living, Yusuf "didn't have complete control of the group, and after his execution, his followers split into at least five factions," reads a Council on Foreign Relations brief on the group.

Now the group operates in cell-like fashion, and maintains near invisibility. Crimes believed to be carried out by Boko Haram are sometimes never claimed by the group. Their structure also makes them difficult to engage.

The most recent kidnapping of the school girls in Chibok is a tragedy, but it's also a tactical move by the group.

"Boko Haram wants to instill fear in the populace, demonstrate that the government can no longer protect Nigerians and make the government look incapable before the people," said Barkindo.

Quite simply, the kidnappings give Boko Haram leverage.

What should the Nigerian government do?

The latest kidnapping, partly due to the horrifying details that keep emerging (the sheer number of girls taken, the lack of organized rescue missions, reports of the women being sold into forced marriages) is putting pressure on Nigeria's policymakers and on international governments to intervene.

Image Credit: Getty Images. A woman holds up a sign during a rally in Lagos, Nigeria.

Just yesterday, U.S. President Barack Obama announced that the U.S. has sent a team of military and law enforcement experts to aid in the search for the missing girls. Some, like Nigerian-American author Teju Cole, worry that this will become a new front for U.S. militarism.

The Nigerian government has already gone on the defense, upping security around schools in the north and shuttering schools and government buildings in the capital in light of the current World Economic Forum meeting there. Some, like Barkindo, believe the next best step for the government is to engage in negotiations with Boko Haram leaders.

"That could be hard, even humiliating, to do politically," writes Murray Last, an anthropologist with more than 50 years of experience on Nigeria. "It might be seen, especially by Christians, to be rewarding extremism and murder too far."

The problems that the Nigerian government faces in terms of combatting Boko Haram and ensuring the safety of its citizen are multilayered, as are the frustrations of many Nigerians with their government's handling of the situation.

"What happened to the trial of Senator Ali Ndume, alleged sponsor of Boko Haram insurgents?" asks Nigerian author Chibundu Onuzo in the Guardian. "Why, despite the billions allocated to defence, are the insurgents reportedly better equipped than our soldiers? Why do Nigerian girls remain among the most uneducated in the world? Why has polio not been eradicated in Nigeria? Where is the $20 billion that our central bank governor discovered was missing from our treasury this year? And, of course: Where are our girls?"

"I cannot help but wonder what comes next," Onuzo writes. "When the girls are released, will they be returned to a country where they are not at risk of being abducted again? Will they be released to families that are safe from the threat of Boko Haram attacks?"

At this point, "It's not about the effort," the uncle of one of the abducted girls said. "It's about the result."