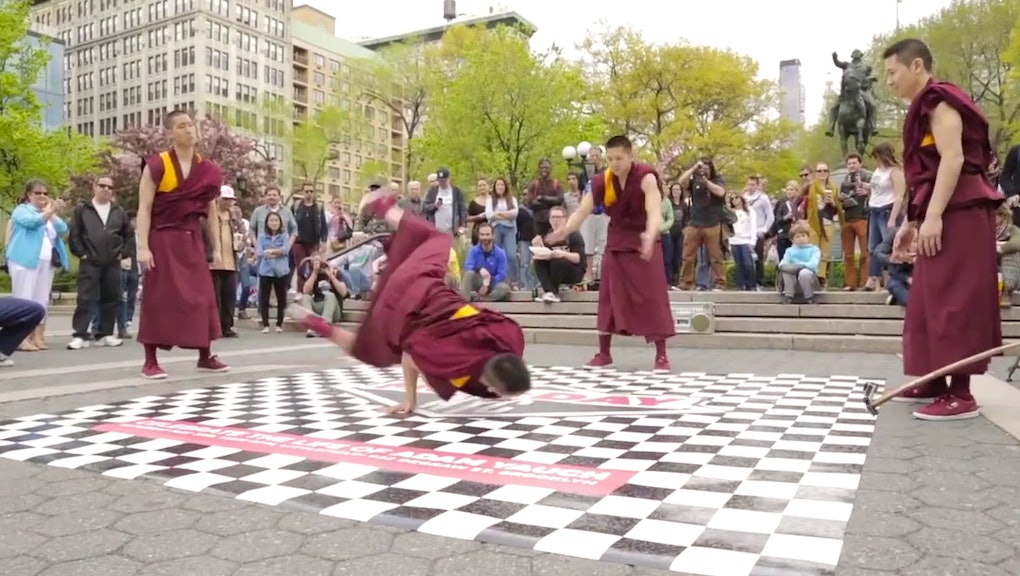 The Story Behind Those Tibetan Monks Breakdancing to Beastie Boys

Tibetan Buddhist’s sixth vow is to refrain from singing and dancing. The practices are not condemned; they are simply discouraged because they distract a monk from his higher goals of freeing the mind from its natural obsession with sensual pleasures.

The performance went hugely viral, with videos from all angles and resolutions popped up across the Internet. Most commenters on Facebook remarked on how "weird," "cool" and seemingly "random" the performance was; most articles settled for a straightforward account of the monks' dance. But there was nothing random about it.

The dance was choreographed by New York advertising firm KNARF for the good cause of promoting MCA day. Most people missed that it was a publicity stunt, but more importantly, people missed just what the Beastie Boys and Tibetan Monks had to do with each other: Yauch wasn't just an iconic rapper; he was a devoted Buddhist who dedicated much of his life to the cause of Tibetan liberation. He promoted that cause in all of his art. This video may not be as spontaneous as it seems, but it's a beautiful tribute to his deep legacy.

Yauch had long been fascinated with mystic and spiritual concepts ever since the release of the Beastie Boy's first smash record in 1986. Tibet hooked his interest 1992 when he visited Nepal for the second time and met some monks who introduced him to Tibetan Buddhism. He was fascinated by the religion's teachings of nonviolence and compassion. When Yauch saw the Dalai Lama at a conference in 1993, he confirmed his faith. Yauch described the experience:

"I happened to catch [the Dalai Lama] when he was walking out of a room. It was wild. He grabbed both of my hands and looked at me for a second and I felt all this energy. I just walked to my room and it clicked in my head. I thought, I need to write a song about this."

That song was the Beastie Boys' "Bodhisattva Vow," which appeared on Ill Communication. The lyrics are a play on the traditional Mahayana Buddhist vows, which are all about putting other people's spiritual fulfillment before your own. The lyrics outlined everything that fascinated Yauch about the religion and laid the groundwork for his activism that he dedicated the rest of his life to.

"Knowing love can conquer hate in every situation

Yauch's fascination with the religion became his support of the Tibetan liberation. He describes his feelings about that movement in an interview with Frontline: "We're able to help the Tibetans to gain their freedom," he said. "But I think the really significant part of it for us for the western world is we have a lot to gain from the Tibetans — there are certain lessons that are within Tibetan culture. I mean understandings of compassion and of nonviolence that are things that we really lack in our society."

To spread the message, Yauch established the Milarepa Fund in 1994 to help raise awareness and funds to support the liberation movement. The Milarepa Fund organized multiple Free Tibet concerts throughout the '90s. When the Beastie Boys headlined Lollapalooza in 1994, they introduced the crowd to a group of Tibetan monks that had been touring with them. MCA summarized their struggle to free their country from Chinese rule. The monks passed out pro-Tibetan literature into the crowds and helped run a tent to engage festival-goers in conversation on the issue.

When Yauch lost his battle with cancer in May 2012, the Dalai Lama offered his condolences to the Yauch family: "Adam had helped us raise awareness on the plight of the Tibetan people by organizing various freedom Tibet concerts and he will be remembered by his holiness and the Tibetan people."

So rarely do artists truly fuse their art and spiritual beliefs as flawlessly as did Yauch. And so rarely does a posthumous tribute capture the spirit of a fallen artist's work as perfectly as those breakdancing monks in Union Square. These dancers continued Yauch's mission in the most direct and inspiring way possible: spreading awareness of the Tibetan liberation struggle (which continues today) by using hip-hop music as the vehicle for social change it was meant to be.