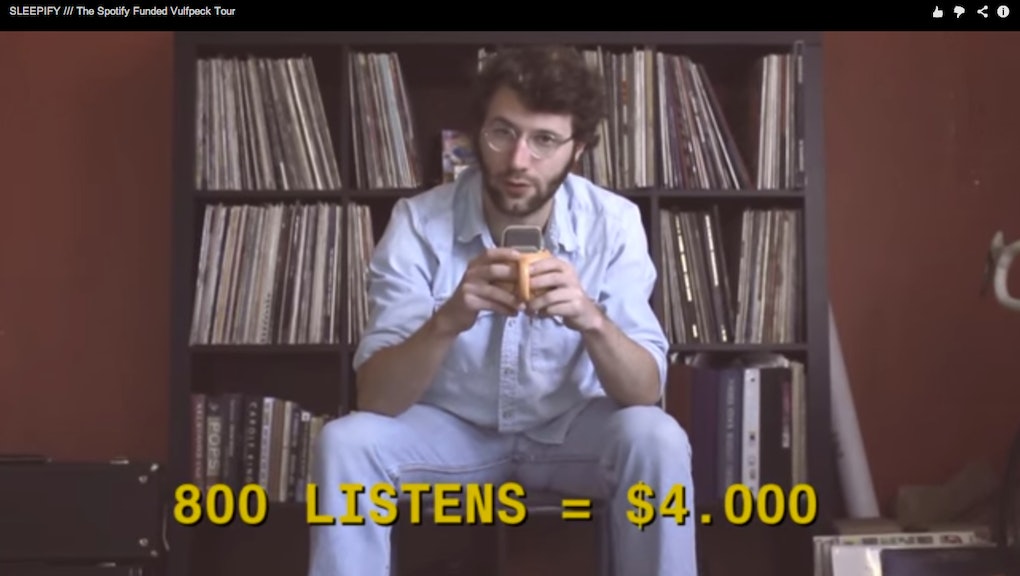 A Scrappy Young Band Just Outsmarted Spotify for $20,000 to Give Their Fans Free Concerts

Last month, indie band Vulfpeck wanted to go on tour. Like most indie bands, though, they didn't have the money. With streaming dominating the industry and music streaming giant Spotify paying a grand $0.007 per stream (Vulfpeck sights it at $0.005), it didn't look like they'd be making money anytime soon. Spotify had been promising they'll start paying more — just as soon as they grow their Premium user base from 6 million to 40 million. In short: never.

So scrappy soul band Vulfpeck came up with a plan of their own.

They uploaded 10 tracks of silence to Spotify under the name Sleepify. Then, they put out this video, urging fans to stream the album on repeat while they slept. The band pledged to use the royalty revenue they racked up to fund a tour, where all shows would have free admission. And it worked.

Each song on Sleepify is completely silent and only runs about 31 or 32 seconds long, the bare minimum length for a song to register as a royalty-worthy play on Spotify. The band calculated that if one user listened to the album all night on repeat (800 plays) that would work out to a $4 payout. Multiply that by thousands of listeners and you start to get some serious numbers. The band ended up netting around $20,000 in royalties from the album.

Sleepify has since been taken down, as Spotify claimed the album violated the "terms of their content," likely because, unless you're John Cage, there was no actual music on the album. Vulfpeck took the album down. Then they released a three-minute long album called Official Statement. The opening track was called "#Hurt."

The band gets to keep the money, though, and their brilliant anti-system play is proof that the music industry has fundamentally shifted. Sleepify's payout is incredible, considering that even decently known indie bands usually only hover between $33 and $3,300 in royalties.

One U.K. indie artist, Sam Duckworth, wrote a piece in the Guardian condemning Spotify, saying that 4,685 streams netted him $32.57, equivalent to what he would make selling two records at one of his shows. Duckworth wrote: "I think it's fair to say that at least two of those almost 5,000 listeners would have bought the album from me if they knew the financial disparity from streaming."

Spotify is causing physical and digital album sales to tank at all levels of the industry. Last year overall album sales (digital and CDs) dropped 8%, while streaming increased 32%. This week is particularly bad for sales. The top 10 albums on the charts sold a cumulative total of around 320,000 copies. At the start of the millennium, big albums like Eminem’s Marshall Mathers LP brought in 1.76 million copies in its first week.

Albums don't sell anymore — they stream. And then they don't pay.

Spotify continues to promise more money contingent on its more than sextupling its Premium subscriber base — a long-shot goal, considering the market competition for streaming services. So the only way to generate actual revenue off streaming is to game the system.

That's why Vulfpeck isn't an anomaly. There is no system by which young artists can make their way up. The only way forward is through beating the system at its own game.

Take musical spam artist Matt Farley. Farley turns a profit by releasing massive 100 song albums full of 30-second songs, hitting on key SEO terms. Some of his bangers include: "Amanda Knox Is Not Guilty," "Ryan Gosling, You Are A Great Singer and Actor, Will You Be My Friend?" and the 700 prom songs he's released all titled "[Name], Will You Go to the Prom with Me?"

Farley doesn't make those songs just to cash in — he does it to support his real musical project. Similarly, Vulfpeck didn't scam Spotify just for glory; they did it because they need to play. It's not just a stunt. It's a symbol of how far the music industry has fallen; and how resilient our best musicians can be.