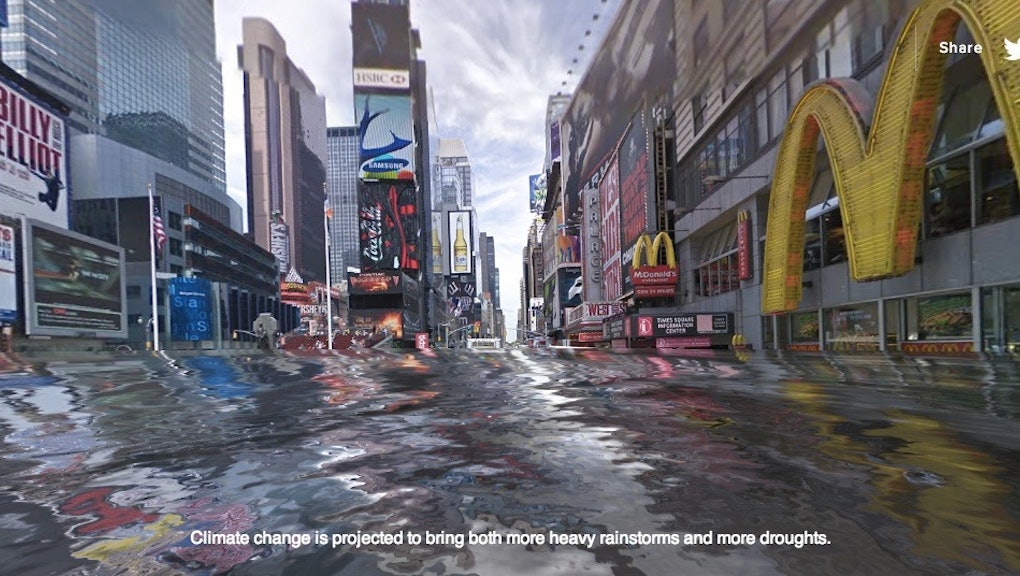 The news: Whenever people talk about climate change in the abstract, it's hard to visualize what it actually means in real-life terms and consequences. Sure, sea levels might be rising, but what does that actually mean for me and my family?

A new website called "World Under Water" will help you with just that. The site, created by environmental crowdfunding platform Carbon Story, combines Google Street View images with wave graphics to demonstrate how rising sea levels might affect the world's most famous landmarks — as well as your own backyard.

"The idea isn't just about creating a shocking effect, but rather to give people an opportunity to become part of the solution to climate change by calculating and offsetting their carbon footprint using CarbonStory's website," reads the company's press release.

Here are a few examples. Moscow, Rome, London, Paris, Dubai, Yucatán, New York and Kamakura are all inundated in these images. The site tools allow you to get a panoramic, interactive view of what it would be like if these cities flooded one day.

Image Credit (all): World Under Water

But the site's most powerful feature allows you to type in any address, including your own, to see a more personal scenario. It's one thing to see a famous landmark underwater, but seeing your own home like this is a completely different thing.

For good measure, this is what it would look like outside PolicyMic's office if sea levels rose:

Is this accurate? The site does not provide any information on how it calculates potential sea levels in each city. Instead, it seems to automatically generate a standard wave graphic for every locale, which is definitely not reflective how areas of different geographic height would be affected by rising sea levels. And as Mashable's Andrew Freedman points out, the site's aim is "more consistent with a climate change marketing gimmick than scientific tool."

Still, it's a pretty powerful tool that raises awareness on a crucial issue. As the UN's Intergovernmental Panel on Climate Change reported this March, man-made climate change has already contributed to rising sea levels and increasingly acidic oceans. If left unchecked, the report concluded, it has the potential to devastate the food supply and lead to further food insecurity and conflict.

Another visualization tool is the less flashy but more fact-driven Surging Seas, which is run by the nonprofit Climate Central. The site provides estimates on where sea levels will rise and by how much. For certain cities, it even has data on population density, property value and social vulnerability of different neighborhoods.

Ultimately, these tools are meant to publicize climate change in a way that affects you viscerally. Your home might never get knee-deep in water, but someone else's will.