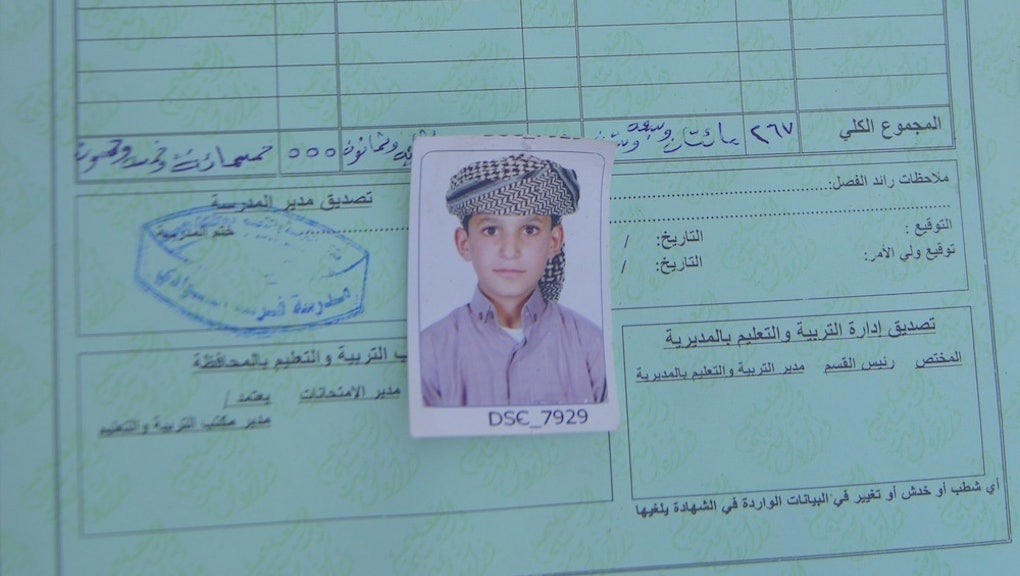 8 Stories of Civilians Killed by U.S. Drone Strikes in Yemen

"A drone was hovering overhead all morning. There were one or two of them. One of the missiles hit the car. The car was totally burned. Four other cars were also struck. When we stopped, we heard the drone fire. Blood was everywhere, and the people killed and injured were scattered everywhere," said Abdullah Muhammad al-Taysi in an interview with Democracy Now.

What al-Taysi describes here is not a gruesome scene from a war zone — it is a wedding that took place in the Yemeni city of Rad'a, a happy celebration that turned bloody, thanks to a strike carried out by a drone operated by the U.S. military. The attack resulted in 12 deaths, including al-Taysi's son, Ali Abdullah Muhammad al-Taysi.

He wasn't the first loved one to be killed by a drone strike, and he won't be the last. We don't know the exact number of civilians killed by missiles fired by drones, but up to 132 civilians may have been killed between 2002 and 2014.

"It is a lot like playing a video game. But playing the video game for four years on the same level," said one former operator of Predator drones.

Former drone operator Heather Linebaugh described in the Guardian how hard it was to distinguish between civilians and an intended target on the videos provided by drones: "We always wonder if we killed the right people, if we endangered the wrong people, if we destroyed an innocent civilian's life all because of a bad image or angle."

That lack of humanity is part of the problem: Drone operators tucked away somewhere in Nevada or New Mexico are shielded from the casualties of their work, the human beings killed, the damage and destruction caused when a hellfire missile explodes into a car packed full of people.

That's perhaps why they're the weapon of choice for the Obama administration: Afghanistan, Iraq and, on a lesser scale, Libya, have left Americans wary of more foreign adventures. Instead of dealing with body bags returning home, drones offer a different way of attacking the enemy without ever having to put U.S. soldiers into harm's way.

The argument is that the civilians are collateral damage, and it's horrible that they had to die, but that's war. But there is no war between the U.S. and Yemen. The war is with al-Qaida, a non-state entity — and waging a war against a group leaves more room for Yemeni civilians to get caught in the crossfire.

The following stories of eight people killed by drone strikes are important to tell because they show that behind every sanitized report of drone casualty figures, there are real people with goals, loves and dreams whose lives have been extinguished.

Abdulaziz was in the wrong place at the wrong time. The 10-year-old was killed in a strike in June 2013 in al-Jawf. Already in the 7th grade, he was bright for his age. The school certificate his father proudly held up showed that he had excelled in his Quran and Arabic language exams that year. He passed his English class, too.

Abdulaziz's brother, Saleh, was the target of the strike that killed them both. He had joined AQAP (al-Qaida in the Arabian Peninsula), and was disowned by his father. Saleh had been away from his family for months, but on the day of the strike had decided to come and see his mother. As he passed through town in his pickup truck, Abdulaziz spotted him and asked for a ride home.

Abdulaziz's father, Hassan, was upset at the idea that his youngest son was a justified target.

Aref, 30, and married with seven children, was out celebrating a wedding last December when he was killed. Wedding convoys are a tradition in Yemen called a zafa, and around 11 vehicles were taking the bride and groom back to the groom's village, Jishm. Four missiles fired from a drone hovering above the convoy killed Aref, along with 11 others.

Aref's father, Ahmed, a 70-year-old shepherd, said Aref provided for his extended family by going into Saudi Arabia and selling goods, and then returning after a month or two. Now his family has to provide for his wife and children, the youngest of whom was 15 days old when his father was killed.

Zabanallah, Aref's elder brother, was adamant that his brother was innocent.

"Why do they only kill the innocent? The weak? They orphaned the children."

When Aref's body arrived in Jishm with the other dead, the whole village erupted in mourning.

"They were wailing from one side of the valley to the other when they saw what happened to him," Ahmed said. "If you'd have heard it, it would have haunted you."

Salim was in the same wedding convoy as his fellow villager Aref when the drone missiles struck.

A father of six, he lived in a small stone building that he'd recently built. The villagers were semi-nomadic and regularly moved, seeking new pastures for their livestock to graze on.

Ahmed, Salim's brother, is now taking care of Salim's wife and children, in addition to providing for his own wife and four children. He is worried about the future, and sees no help coming from his own government.

"The state has done nothing," he told PolicyMic. "Nothing. There's nothing here."

Salim's son, also named Ahmed, could barely speak when I met him. When asked about what had happened, the child responded bluntly:

"My dad was hit by the plane. It would be better if my dad was still here."

4. The teen killed by his own government: Abdulrahman al-Awlaki

Abdulrahman, an American citizen, was a 16-year-old whose Facebook profile shows a moppy-haired, smiling teenager messing about with friends. His father, however, was AQAP cleric Anwar al-Awlaki. Abdulrahman was killed by a U.S. drone in October 2011.

Abdulrahman was born in Denver, and the fact of the matter is that he was a child killed by his own government. According to his grandfather, Nasser, he watched The Simpsons and listened to Snoop Dogg. The overwhelming evidence that he was no militant was not enough for former White House Press Secretary Robert Gibbs, however, who said that Abdulrahman should've "had a more responsible father."

Abdulrahman disappeared from his family home in Sana'a in September 2011 to go and look for his father, whom he had not seen for two years. He traveled to his family's ancestral homeland, Shabwa, only to learn that his father had been killed by a drone on Sept. 30. He called his family to say he was coming home. He didn't; two weeks after Anwar al-Awlaki's death, Abdulrahman was killed at an open-air restaurant.

Salim was the very type of person that those fighting al-Qaida should hope to protect. The imam of a mosque, he was an opponent of al-Qaida, regularly preaching against them, and in the process of setting up an organization that would oppose al-Qaida ideology. He was a schoolteacher and held a master's degree.

On Aug. 28, 2012, Salim travelled to his ancestral village of Khashamir to celebrate the wedding of his nephew.

On Aug. 24, Salim had been invited to give the Friday sermon at the village mosque. In it he challenged al-Qaida to present Islamic evidence for their actions. On Aug. 29, al-Qaida members came looking for Salim, and he agreed to debate them. Missiles were fired at Salim and the al-Qaida men, and they were all killed immediately.

Faisal Jaber, Salim's brother-in-law, has many unanswered questions. Why was the car attacked in a populated area? Why were the vehicle's occupants not apprehended while passing through the army checkpoints?

"Who will compensate the victims, and the orphans, and the widows?" Faisal said. "Can the Americans live night and day in fear and terror? Do they consider us human beings with rights?"

Waleed was Salim Jaber's nephew, and he was killed in the same drone strike in August 2012.

Waleed was a traffic policeman in Khashamir and 27 years old when he was killed. He had one son and was known for his bravery in the village. He was the youngest in his family.

Waleed had encouraged the reticent Salim to speak to the al-Qaida members who had turned up in the village. He told his uncle that there was no point in challenging al-Qaida and then being scared when they arrived. Taking his pistol with him, he joined his uncle outside the mosque where they were both killed. A pistol is no match for missiles.

Jabir al-Shabwani was the deputy governor of Marib governorate and an important tribal leader there.

In May 2010 he went to meet al-Qaida members in an effort to mediate with them, and to get them to hand themselves in to the Yemeni authorities.

Instead, in a botched attack, a U.S. drone killed him in a place called Wadi Abida.

Since the killing, for which Yemen's supreme security committee quickly apologized, the Shabwani tribe have been attacking government infrastructure in revenge for Jabir's death. Marib is home to significant oil and gas reserves, and the power station that serves most of Yemen's highland cities.

The tribe's demand is that the Yemeni government stop cooperating with the American drone attacks. According to Yemeni political analyst Abdul Ghani al-Iryani, that drone strike has cost the Yemeni economy more than $1 billion.

Ali al-Qawli was a 34-year-old father of three and a teacher working at an elementary school in Juhana, just outside Yemen's capital, Sana'a.

He was a cheerful, optimistic man and had been a supporter of Yemen's popular revolution in 2011, joining thousands of others in Sanaa's Change Square, where he called for freedom and democracy. He wanted a better future for himself and his country, and dedicated himself to his teaching. In 13 years of teaching, he hadn't missed a day of work.

On the morning of Jan. 23, 2013, his students waited patiently for their teacher to arrive. "Mr. Ali will not be coming in today," the principal eventually told them.

He had been killed by a drone strike the previous evening, after unwittingly picking up apparent al-Qaida members in the car his cousin used as a part-time taxi.

Writing for Al-Jazeera, his brother, Mohammed, spoke of his anguish.

"Ali's love of life couldn’t save him. My love for him couldn't save him."