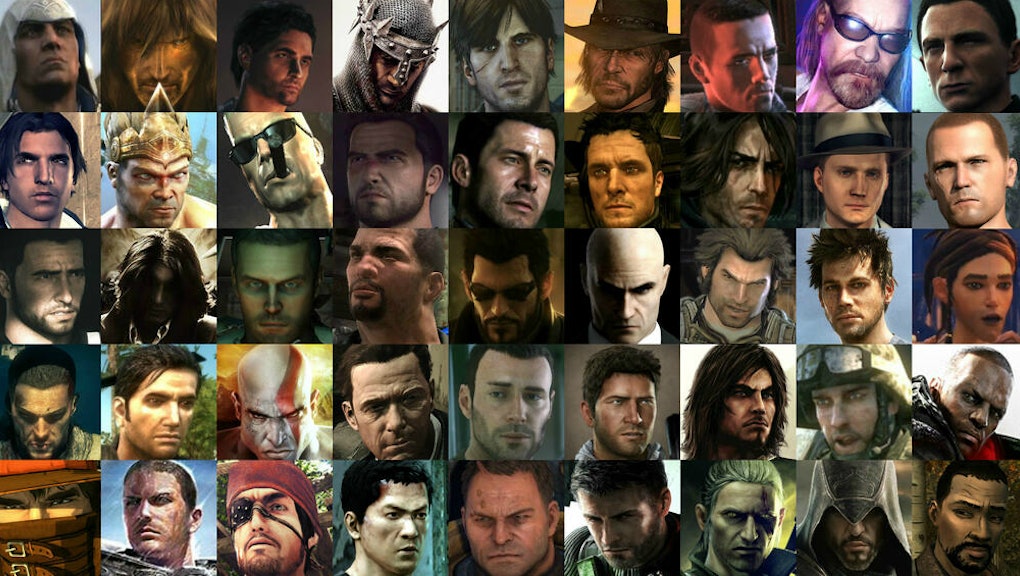 Aiden Pearce, the protagonist of Ubisoft's highly-anticipated Watch Dogs, looks very familiar. Dark hair, early 30s, scruffy facial hair: If you were to put Pearce in a police lineup along with the other protagonists of the most popular western-developed video games, he'd be nearly impossible to pick out. As Polygon writer Colin Campbell notes, Pearce "looks like a randomly generated video game anti-hero."

Pearce is a vigilante hacker who wreaks technological havoc in Chicago in order to accomplish his goals. He looks virtually identical to Nathan Drake in Uncharted, or Joel in The Last of Us, or Booker DeWitt in Bioshock Infinite, or John Marston in Red Dead Redemption, or … well, the list goes on. Video game developers either have an Adam Levine obsession or they're continuing to lazily cater to a perceived audience of straight white male gamers.

When Watch Dogs was first unveiled at the Electronic Entertainment Expo in 2012, it blew critics away. Luke Plunkett at Kotaku raved "it looks amazing" and IGN's Richard George said it "has the ambition of scope and detail that few games have." Unfortunately, Aiden Pearce's cookie-cutter image keeps it from becoming the incredible game Watch Dogs could have been. Thanks to Aiden Pearce, Watch Dogs symbolically marks the start of another worrying game cycle of female under-representation.

The specific contours of Pearce's character are also snooze-worthy. In a Polygon preview, the lead gameplay designer of Watch Dogs describes Pearce as an "antihero" who "lives in shades of grey." He is a "guy with a lot of rage" who is initially hard to like. Does that sound like Walter White on Breaking Bad, or Vic Mackey on The Shield or Frank Underwood on House of Cards? An amoral male antihero in 2014 is about as exciting as a slice of white bread.

Non-white gamers too, as Owen Good notes on Kotaku, are not being actively courted by game publishers, despite a Nielsen report that black gamers now spend more time per day playing games than any other group. As gamers grow more diverse, video game protagonists are continuing to stagnate.

Most video game journalists are not commenting on Pearce's race or gender, in part because his character seems so unremarkable, but also because Watch Dogs is an otherwise alluring game. The game is seen as technical proof of concept for Microsoft and Sony's freshly-minted consoles, the Xbox One and the PlayStation 4. Sony boasts the game will run at 60 frames per second at high resolution, "with the best graphics on any console." Watch Dogs is built to impress.

Watch Dogs also promises to make meaningful changes to the tried-and-true open-world formula that has made the Grand Theft Auto series so successful. While game journalists, like Kotaku's Stephen Totilo, try to remain skeptical, they continue to cover the game with the sort of breathless attention that only accompanies a hotly-anticipated release. Previews focus on the dynamism of the Watch Dogs world and the complexity of its approach to surveillance culture.

To be fair, Watch Dogs' generic male protagonist is no more or less egregious than the protagonist of any other game featuring a scruffy, mid-30s male in the lead. What is most concerning here is the proliferation of the cycle of under-representation that Watch Dogs symbolizes. When new hardware — like the PlayStation 4 and Xbox One — gets released, there is a period of time known in the video game industry as the start of a "console cycle." Publishers tend to retreat into "safe" thematic content during that cycle until the hardware gathers momentum and the gaming audience rebuilds, much like what is happening now with Watch Dogs.

Games released at the start of a console cycle (like Bungie's Halo: Combat Evolved for the original Xbox) tend to push the technical characteristics of gaming forward, while trotting out the same staid characters and story lines. Late in a console cycle, publishers will take "risks" on female protagonists in big-budget games like last year's Tomb Raider reboot. This is a representational dynamic that's unique to the games medium.

At the heart of this console cycle is a common misperception — most recently expressed by Epic's Chris Perna — that it's "tough to justify" including female protagonists in a game if you want your game to "sell." This has become something of a self-fulfilling prophesy, a calming platitude that game studios whisper to themselves in order to justify cultural conservatism and creative laziness. It's hard to know how well a game with a female protagonist can sell until you make one and market it as aggressively as you would any other title. There's no telling how a game with a female protagonist would perform if it had Watch Dogs' creative energy and marketing budget.

It's time to interrupt this cycle of female under-representation, instead of passively allowing it to play out just one more time. Watch Dogs doesn't seem to be a game with misogynist content that will arouse feminist ire, but it is a prime example of a game whose generic protagonist is worthy of interrogation and criticism. At this point in the history of video game representation, publishers need to be put on the defensive and asked to justify their inclusion of another straight white male protagonist when there have already been so many. It's time to stop implicitly accepting white male characters as the default and to start asking hard questions about why we need another Aiden Pearce.