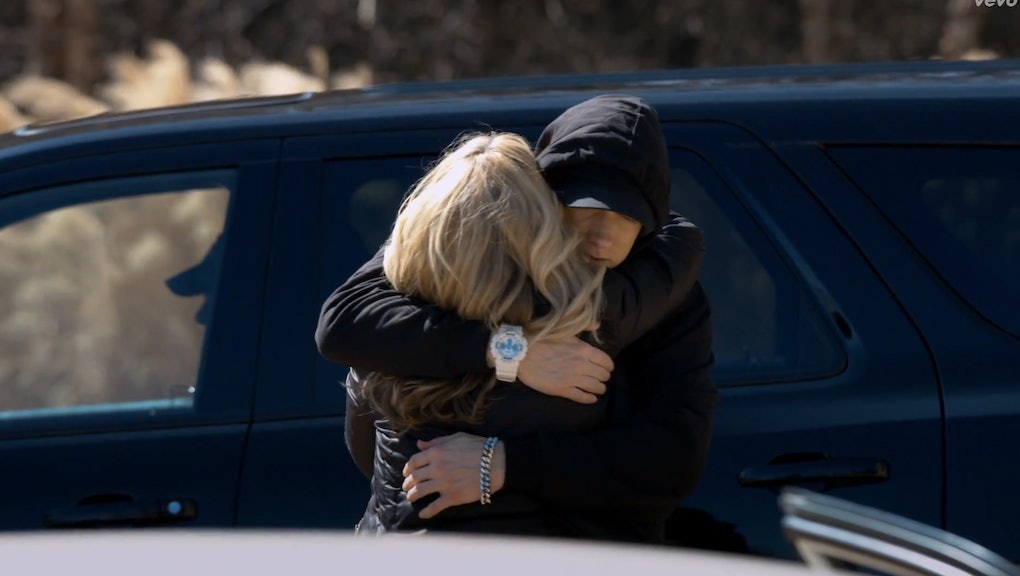 Few people have had more public or drawn-out family troubles than Eminem and his mother. On his first big hit, "My Name Is," he claimed, "My mom smokes more dope than I do." Since, his battle with his dark past and his mother has only become more dramatic.

On Sunday, he set aside his burden. Pop culture's angriest son, rapper Eminem, released a video in which he finally publicly apologized to his mother.

Eminem's entire career has focused on plumbing the depths of his traumatic childhood. This song, then, is a rare shift in his focus. Spike Lee directed the piece, his first music video since Michael Jackson’s "This Is It" in 2009. They shot it in Detroit, Eminem's hometown, mostly from the imagined perspective of Em's mother, Debbie Mathers. The whole film shows her struggle to reconnect with her son, culminating in a simple, subtle three-second reconciliation (between Em and a stand-in), a moment that bears the weight of dark songs like "Cleaning Out My Closet." It feels honest because it's downplayed — because even as Eminem asks for forgiveness, he acknowledges that he and his mother remain estranged, something only too evident from her absence in the video.

It's been a long road to such a public forgiveness. In 2001, his mother filed an $11 million defamation lawsuit to claim reparations for her son's lyrics. She only came away with $1,600 ($23,354.25 going to her lawyer). She's tried to set the record straight on many occasions, most notably in 2007 when she penned a memoir titled My Son Marshall, My Son Eminem. In it, she claims the two were close before Eminem's rise to superstardom, and that he stretched the truth of their relationship in order to create a dramatic backstory. But, according to her 2001 rap record, Setting the Record Straight, she grew tired of public shaming. On the album, she released a song called "Dear Marshall," in which she recites a letter she wrote asking him to stop attacking her:

"Will the real Marshall Mathers please stand up? / And take responsibility for his actions"

Eminem is a great artist because his art is inseparable from his life — because this video reads like a genuine act of forgiveness and not like a stunt. Reconciled or not, Mathers is an integral part of her son's legacy. She isn't alone, either. There are a surprising number of notable mothers in rap's pantheon. Tupac's "Dear Mama," or Jay Z's mom speaking on "December 4," Kanye West's "Hey Mama" and Snoop Dogg's "I Love My Momma" all show their mothers as hardworking and supportive of their rap dreams. Eminem's relationship with his mother clearly has not been easy, but it's been important nonetheless. This video reminds of what it means to truly forgive, and to live with — and overcome — pain.