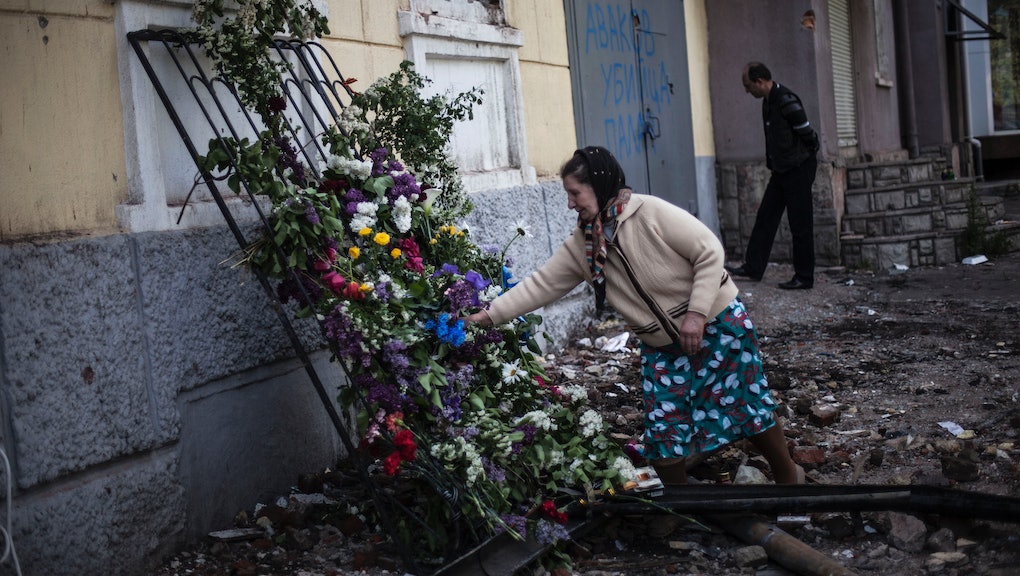 Descending into a popular basement bar on a leafy street in Kiev a few weeks ago, my cousin turned to me with worry in her eyes. "Do me a favor — don't speak Russian too loudly here," she said. "I'm sorry, but you have a horrible Moscow accent. Who knows, maybe they'll think you're a spy."

"Don't spies try to conceal their identity?" I joked feebly.

Although I was born in Ukraine, I do have a Moscow accent when speaking Russian; it's the product of living and working in Russia for years. Today, I sound more like my Russian husband than my Russian-speaking Ukrainian relatives when I open my mouth.

And for the first time, my loved ones see that as a liability. Donetsk and Lugansk regions held autonomous referendums that the interim government in Kiev blasted as illegal, as Ukraine teeters on the brink of civil war — and it's tearing families, as well as the country, apart.

Image Credit: AP. Pro-Russian celebrations in Donetsk, after declaring itself independent from Ukraine.

After the Euromaidan protest movement toppled Ukrainian President Victor Yanukovych back in February, many people blamed Russia for fomenting unrest in Eastern Ukraine, where scores of people have already died. Yanukovych was traditionally seen as a Kremlin ally, and the Russian government has argued that his ouster was illegal and unconstitutional. Although rebel groups in the east appear divided over their ultimate aims, they are all bound by their refusal to bow to the interim government in Kiev, and look to Russia for guidance. The Ukrainian security services, meanwhile, have alleged that Russian troops are directly involved in rebellion in the East. It's a tense, confusing atmosphere in which a Moscow accent can, in fact, prompt anger and suspicion — and worse.

Of course, beyond the geopolitics exists the very personal impact of this conflict. My tense moment with my cousin was minor compared to some families: Parents disown their children, children disavow their parents. I spoke with 22-year-old Christina (who was nervous about sharing her last name), a former resident of East Ukraine disowned by her mother.

"I understand she is now going to will her apartment and everything else to someone else," she said.

Christina currently lives in Kiev and identifies herself as a supporter of the Euromaidan protest movement that erupted last autumn, when then-President Yanukovych abruptly decided to back out of an association agreement with the EU. Protesters blamed Yanukovych's decision on pressure from the Russian government.

To add to the complexity of the situation, a relatively small but active, vocal and violent faction of the Euromaidan movement was composed of the ultra-right, leading to concerns about the possible rise of fascism after Yanukovych fled following the shooting deaths of dozens of protesters in downtown Kiev.

Christina, who told me she sympathizes with Euromaidan but does not consider herself an activist, says she is neither right-wing nor anti-Russian, and was distraught about the current tension between Ukraine and Russia, and how it has affected her family.

Political arguments with her mother back home in Donetsk, which is closer both geographically and culturally to Russia, reached a fever pitch after Russia annexed Crimea. "My mom was glad to see Crimea become part of Russia," she said. "And when she saw that I wasn't happy, she became really upset."

"I can understand where she's coming from. She had a normal, safe childhood under the Soviets," Christina said. "By the time I was growing up, Ukraine was basically this chaotic, crime-ridden place. So who wouldn't be nostalgic? I kept telling her that I didn't want to destroy her heritage, I just want Ukraine to move forward, but she doesn't see it that way."

Back in Moscow, I caught up with Artyom, a Kiev native in his 30s who has spent most of the last decade living and working in Russia, and who is currently not on speaking terms with his relatives in Ukraine.

Artyom, who also asked to conceal his last name for privacy reasons, said that recent deadly clashes in the port city of Odessa were a turning point as far as his relationship with his relatives goes.

"When unarmed protesters were shot in Kiev in February, everyone was horrified," he said. "But then a bunch of pro-Russian activists die in this horrible fire in Odessa and it's this completely indefensible thing, a real tragedy … But [my relatives] are making excuses for what happened, saying that a war is on, and this is what happens in war."

For Artyom, who describes himself as an "overworked office manager," any justification for the Odessa deaths is pure hypocrisy.

"Sure, there was fighting that led up to the fire, and yes, there needs to be an independent investigation," he said, his Ukrainian accent, much like mine, erased by years of living in Moscow. "But you can't excuse the horror and violence that then followed, and you can't place a different value on these people’s lives."

In spite of Russian President Vladimir Putin's recent call to de-escalate the conflict in Ukraine, violent upheaval in the eastern Ukraine continues.

And for many of us, the conflict remains as personal as ever.

In the battle-weary town of Slavyansk, among the hostages being held by pro-Russian forces is Kiev theater director Pavel Yurov. Pavel is a professional and personal friend, a man who took me under his wing as a writer.

He was captured alongside his friend, Denis Grishchyuk, when the two traveled together to Slavyansk to see what was happening there firsthand. According to a Ukrainian journalist recently released by the hostage-takers, Pavel's nose is broken, while Denis has suffered a broken rib.

It's hard to come to grips with the fact that the fast-talking, eccentric guy who used to call me "Shakespeare" is missing, and that the best case scenario involves him in a basement somewhere with a broken nose.

We all have such stories.

After Odessa, Artyom told me that his big, multiethnic family split into two camps. "The [Ukrainian side] is telling me that since I'm based in Moscow, I must be brainwashed, and I just don't want to deal with that right now," he says. "We'll talk after everyone calms down."

I asked Artyom if he's certain that things will, indeed, calm down any time soon. On the phone, he is silent for a while. I am silent too. We share a special kinship in this moment — the kinship of people whose home country appears to be going to hell.