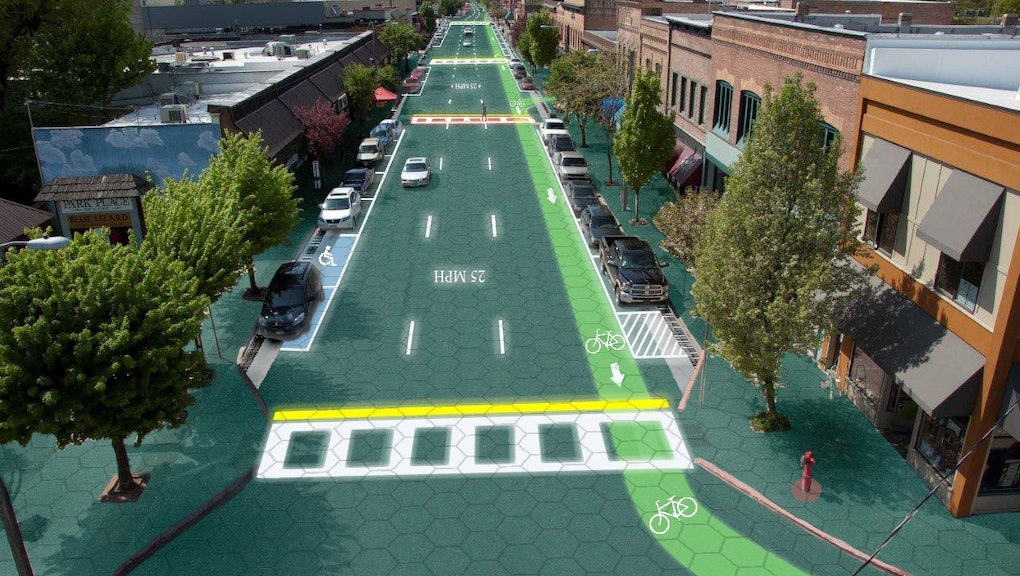 This Video Sounds Ridiculous, But It's Very Serious and Could Transform Our Future

In April, a team of Dutch designers used glow-in-the-dark paint to highlight a 500-meter stretch of highway like it was a scene from Tron. The project was designed to light up the highway in an innovative and energy-efficient way. But an Idaho couple has just taken that idea a step further — they've actually redesigned roadways to become sustainable sources of solar energy.

Solar roadways have received interest ever since their 2010 debut, but Scott and Julie Brushaw claim to have a working prototype covering a 12-foot by 36-foot parking lot. The hexagonal panels can follow curves and hills, be heated for easier snow and ice elimination and include microprocessors and LEDs to display road markings or relay messages. And they're highly resistant to traction and impacts, and are rated for a 250,000-pound load.

Saving energy and money: According to the Brushaws, a commercialized solar roadway should save enough energy over the course of its lifespan to pay for itself. But they need funding to commercialize the prototypes and make solar roadways a real, commercial product. A $50,000 private grant and two rounds of Federal Highway Administration funding got them to this stage, but the Brushaws are relying on a $1 million Indiegogo campaign to make their dream a reality (they're currently floating right around $100,000).

Individual solar panel setups could perhaps power signs, street lamps and traffic signals. Around an entire town or city, solar roadways could even act as a decentralized electrical grid to offset energy demands from homes and businesses, potentially saving the area boatloads of cash.

"The implementation of our vision on a massive scale can produce more energy than we use in our nation," the Brushaws say in their campaign video.

Other innovators: The Brushaws aren't the only ones rethinking roads. Daan Roosegaarde, the creator of the Netherlands' glow-in-the-dark roads, said that he was inspired to experiment with road surfaces when he realized they had more potential: "One day I was sitting in my car in the Netherlands, and I was amazed by these roads we spend millions on but no one seems to care what they look like and how they behave. I started imagining this Route 66 of the future where technology jumps out of the computer screen and becomes part of us."

While the solar road certainly looks amazing, high implementation cost, panel durability and maintenance concerns are all still questions. Plus it's not yet clear how good of a driving surface they would actually be. Nevertheless, as a proof of concept, the Brushaws' new road looks awesome, and will hopefully help to pave the way to a future of renewable energy.