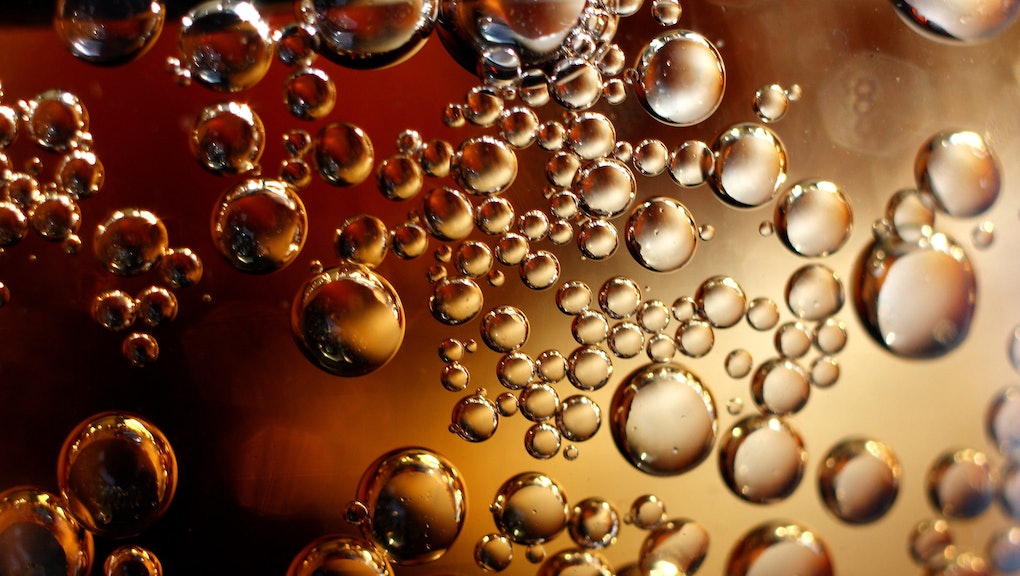 The news: Coca-Cola and Pepsi have both announced they will remove brominated vegetable oil, a somewhat controversial chemical added to prevent the drinks' ingredients from separating. The change followed a series of petitions on Change.org by Sarah Kavanagh, a Mississippi teenager who noted it was patented as a flame retardant and unapproved for use in Japan and the EU.

Pepsi removed BVO from Gatorade last year, and Coca-Cola initiated the push to remove the ingredient from all products by the end of this year (Pepsi apparently jumped on the BVO-free train after Coca-Cola's announcement). The companies aren't framing the change as a health concern; a Coca-Cola spokesperson says "All of our beverages, including those with BVO, are safe and always have been — and comply with all regulations in the countries where they are sold." Pepsi similarly dodged the question of BVO removal by acknowledging it had been "hearing rumblings" about the additive last year.

The Mayo Clinic says that BVO is poorly understood, and few studies have been performed on its effects, so it recommends limiting your intake and opting for healthier choices. The FDA retracted its "generally recognized as safe" designation pending further research.

Though BVO has been getting its time under the spotlight, soda contains plenty of potentially harmful or unhealthy substances. Coca-Cola Light without caffeine, for example, contains sodium cyclamate (a banned sweetener, due to a possible link to bladder cancer) in parts of Europe and South America. In the U.S., it contains acesulfame potassium, which might have caused neurological conditions in mice. Some of the top offenders are below.

It's no secret that Coca-Cola bottled in the United States contains large amounts of high-fructose corn syrup. Though the jury's out on whether HFCS is more likely to cause obesity and other adverse health concerns, research has suggested it's worse for you than regular sugar.

A team of Princeton researchers demonstrated that rats given access to HFCS for six months became obese and showed signs of metabolic syndrome, while rats given access to regular sucrose did not. The team theorized that the results "may relate to the fact that excess fructose is being metabolized to produce fat, while glucose is largely being processed for energy or stored as a carbohydrate, called glycogen, in the liver and muscles."

Other researchers have suggested HFCS and other forms of fructose encourage over-eating compared to other forms of sugar like glucose, thanks to the way it's metabolized. So a diet high in HFCS might be more likely to be one with more overall calories, leading to weight gain.

None of these studies prove that HFCS is worse for you than, say, Mexican cane sugar (which is being taken out of most 'Mexican Coke' anyhow). But that doesn't mean it's not terrible for you. A 12-ounce can of Coca-Cola contains about 39 grams of sugar, or 140 calories. The nearly as common 20-ounce bottle has 240 calories, all from sugar.

Large amounts of dietary sugar and can lead to some of the same health problems alcoholics suffer from, and some researchers think it can even be kind of addictive.

Consumer Reports tested 81 cans and bottles of various popular brands of soft drinks from five manufacturers between April and September 2013. They found that an alarming amount of a potentially carcinogenic chemical called 4-methylimidazole (4-MEI, a caramel coloring) was present in three Pepsi products and Malta Goya, exceeding consumption limits placed by the state of California.

In 2007, a federal study found that excessive levels of 4-MEI in laboratory mice could cause cancer, while the International Agency for Research on Cancer determined it might be "possibly carcinogenic to humans" in 2011.

Here's what they found:

Pepsi claimed that the regulations don't apply to them because most people consume only about a third a can of soda per day — so they were technically under the safe limit. And they also say they've reduced the level of 4-MEI in their drinks.

"No matter how much consumers drink they don't expect their beverages to have a potential carcinogen in them," Consumer Reports toxicologist Urvashi Rangan said. "And we don't think 4-MEI should be in foods at all. Our tests of Coke samples show that it is possible to get to much lower levels."

OK, sure — almost all of us consume caffeine in something like coffee or tea an think of it as part of a healthy, normal diet. But a single can of Coke contains 64 milligrams of caffeine, roughly two-thirds a normal cup of coffee (about 95 milligrams). At Big Gulp sizes, there's the potential that a soda consumer will be consuming large amounts of caffeine at once.

This might not be a huge problem for adults. But for kids, caffeine can be dangerous, leading to sleep pattern disruption, increased anxiety, hyperactivity and stomach problems. Children Hospital Los Angeles' Matthew Keefer says that "What happens is some kids use them in replacement of good hydration, which is worse. Caffeine can cause you to lose more water."

Remember how BPA-free water bottles and food containers were all the rage in 2010? Beverage manufacturers like Coca-Cola continue to widely use BPA to line aluminum soda cans, despite the chemical's link to a variety of health effects in fetuses, infants and young children.

BPA is possibly an endocrine disruptor in rats, may cause problems during fetal development and might reduce fertility by affecting the reproductive system. The research led the FDA to ban its use in baby bottles and sippy cups in July 2012. A 2012 study published in the Journal of the American Medical Association also connected BPA to the weight crisis, finding a significant link between obesity and urinary BPA levels in nearly 3,000 children and teens. Even after "controlling for differences in ethnicity, age, caregiver education, income level, sex, caloric intake, television viewing habits and other factors," children with the highest levels of BPA in their urine were 2.6 times as likely to be obese as those with the lowest levels.

Other studies have linked BPA to everything from cancer and insulin-resistant diabetes to attention-deficit disorder.

"Most people agree the majority of BPA exposure in the United States comes from aluminum cans," said lead investigator and NYU childhood disease researcher Leonardo Trasande. "Removing it from aluminum cans is probably one of the best ways we can limit exposure. There are alternatives that manufacturers can use to line aluminum cans."

Scientists have also repeatedly criticized FDA research that relied on industry funding, some of which had fatal flaws.

For example, the FDA cleared BPA of health effects in February, but other researchers slammed their findings because it turned out the control group was accidentally contaminated with BPA.

"If your controls are contaminated, you've got a failed experiment and the data should be discarded," said professor Gail S. Prins, who worked with the FDA and NIH on the study. "I'm baffled that any journal would even publish this."

"The way the FDA presented its findings is so disingenuous," said another scientist who worked with the agency. "It borders on scientific misconduct."

Coca-Cola has stubbornly refused to change the lining of its cans, saying "Independent scientists have thoroughly reviewed the data and have assured us that our beverage cans pose no public health risk."

This one won't be found in any U.S.-sold colas, since the FDA determined in 1969 that it could cause bladder cancer in rats. Other researchers said that bacteria in the gut could convert cyclamate into toxic cyclohexylamine. But it's still found in Coke Zero sold in Germany, Italy, Spain, Portugal, Venezuela, Chile and some Central American countries. (Consumer protests in Mexico had it removed from their version of the drink in 2008.)

This one might actually be fine — repeated studies have found little evidence that it can cause cancer in other animals. However, the FDA has not reviewed a request for reclassification, likely because American soda companies have already moved on to different flavorings.

What does this mean for me? Soda isn't necessarily toxic. But consuming it regularly has been repeatedly shown to have detrimental health effects. And since it generally contains no vitamins or minerals, there's certainly no beneficial effect of drinking soda other than the taste and possible cravings. So you should probably keep your consumption of Coca-Cola, Pepsi and other sodas to a minimum.