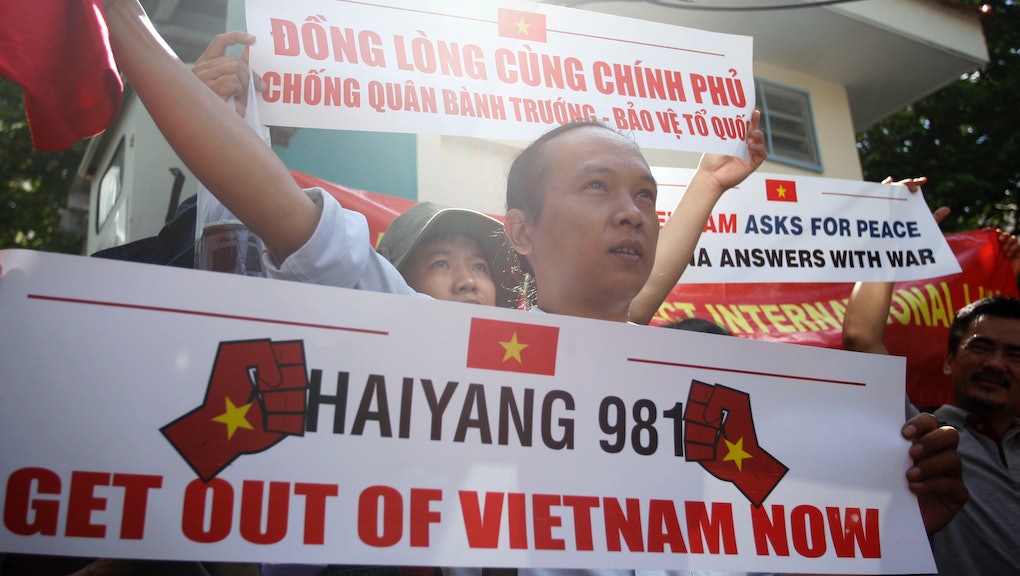 Is Vietnam the Next Most Likely Hot Spot for International Flare-up?

The news. It's an international David vs. Goliath scandal: Citizens of a smaller, less-populated country have taken to the streets in protest against a bullying superpower that has invaded their territory.

Sounds familiar, right? Welcome to Southeast Asia's version of the Ukraine-Russia crisis. Last week, a Chinese state-controlled oil drill allegedly set up shop in Vietnam's territorial waters, igniting an outcry throughout the country. The geopolitics of the situation echo the Crimea crisis, with Vietnamese anti-China demonstrators demanding that China withdraw and some analysts wondering if the U.S. will swoop in for an eventual rescue mission.

China appears to be provoking Vietnam. But this isn't your average big-brother-pushing-around-little-brother situation. Instead, Vietnam is proactively reacting to China in protest. There is a long history of contention between the two countries. The most recent flare-up occurred early Tuesday morning, when thousands of Vietnamese workers staged public demonstrations at several Chinese-owned factories and allegedly vandalized some of the factories as well, ABC reported.

Vietnam is uncharacteristically protesting. In addition to this morning's commotions, Vietnamese residents are putting their dissension of Chinese behavior on display. On May 11, over 1,000 people gathered in front of the Chinese Embassy in Hanoi to protest China. Some sang patriotic songs or held signs saying "Silence is cowardly" and "China don't steal our oil," according to the Guardian.

The communist country is generally quiet — in recent years there have only been a few dozen protests, which are usually squashed quickly by security forces, the Guardian reported. So the recent uprising is unusual, particularly since Vietnamese law enforcement is actually allowing the protests to continue and escalate.

Here is the situation: China assembled its first-ever underwater rig, which cost the country $1 billion. After putting it together, the expensive apparatus was traveling through the South China Sea, heading towards an unknown destination last week. Unexpectedly, the oil rig suddenly stopped and began drilling for oil in waters claimed by Vietnam. Vietnam has a history of embittered battles over the South China Sea. In April, the communist country announced a June party on islands in the area, joining forces with the Philippines in the hopes of staving off Chinese aggression.

The Chinese drill stopped in a region off of Vietnam's coastline and near a cluster of disputed islands — Taiwan, China, the Philippines, Vietnam and Malaysia all claim ownership of different islands respectively. Two years ago, the Association of Southeast Asian Nations (ASEAN) tried to reach a decision at a summit meeting about ownership rights in the South China Sea, but failed to come to a unanimous agreement.

China is the largest trade partner in the area, essentially serving as the backbone to many Southeast Asian economies and industries. So there is little motivation for many countries within ASEAN to stir the pot. Thus, while Vietnam is upset with China's showy affront, there are few neighbors who want to join in Vietnam's uproar.

There's room for interpretation. Speculation about the reason behind China's decision to drill in this specific location has been varied. Yet, the two strongest arguments have also been the most diametrically opposed.

On the one hand, China may be saying, "Hey, this is our territory — and we can do here what we like," according to Holly Morrow, who is a Harvard fellow in the Geopolitics of Energy program. If this is true, the theory that China is bullying and antagonizing a much smaller country is valid. Figuratively, consider that not only is China a superpower, with an estimated GDP of $8.2 trillion (2012 census data), but Vietnam's GDP is roughly only $141 billion. So oil drilling on Vietnam's waters is a huge infringement.

Moreover, China is not relying on the oil supply in the South China Sea for energy security, Morrow points out. And this may be China's attempt to flex its muscles and prove that it can do as it pleases without encountering any opposition. In a sense, this is a geopolitical pissing contest.

Extending beyond just the Southeast Asian countries, there are implications that China could be testing the waters quite literally in terms of determining U.S. commitment. As the world watches the situation in Ukraine continuously worsen, China may also be observing how far the U.S. is willing to go on other international fronts, short of passing sanctions.

On the other hand, the entire scenario may have just been completely misunderstood. Maybe this is just a complete coincidence and/or accident. But on May 12, China and Vietnam did reach an impasse, at least for the time being anyway.

Timing is everything. The problem with the latter interpretation, however, is that the timing of the state-controlled oil rig moving into disputed waters seems extremely calculated. The device travelled into the South China Sea to drill right after President Obama's Asia trip and right before this year's annual ASEAN summit in Myanmar. There was originally talk that the main focus of the summit would be on Myanmar. But at the actual event over this past weekend, the focus pivoted to the events in the South China Sea between Vietnam and China.

However, Morrow suggests that this was not intentional, but merely happenstance. The timing was right for China as a country to act and it took the opportunity to move in and drill. China's ultimate goal is dominance in the South China Sea, not to start a war. So the scenario is just one small step in China's long-term strategy. But if China continues to antagonize Vietnam like this, you have to wonder if persevering Vietnamese protesters could gain momentum that will eventually erupt on a global scale.