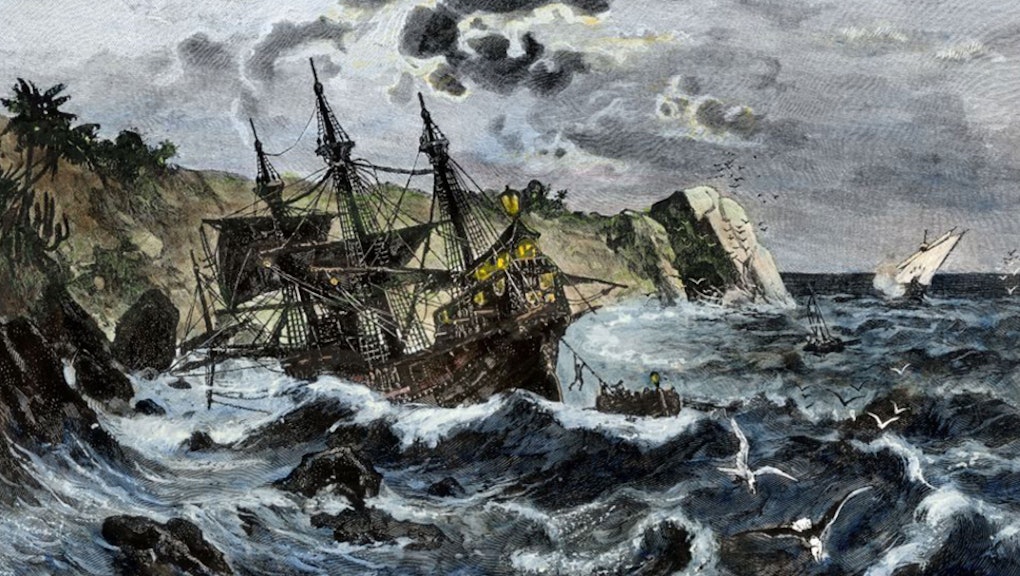 The 500-Year Old Christopher Columbus Mystery Has Likely Been Solved

Found: For more than five centuries, the shipwrecked Santa Maria has been at the bottom of the sea. But reports are now emerging that Christopher Columbus' largest ship has been found off of the northern coast of Haiti. Archaeologist Barry Clifford claims to have found the ship's remains and is eager to prove it with excavation.

If true, Clifford will be responsible for finding the shipwrecked vessel that led to the discovery of the Americas. "All the geographical, underwater topography and archaeological evidence strongly suggests that this wreck is Columbus' famous flagship, the Santa Maria," Clifford said to the Independent. Thus far, the evidence makes a very compelling case.

Last seen: In August of 1492, Columbus set out on the voyage that marked European exploration with three ships; the Nina, the Pinta and the Santa Maria. On Oct. 2 of that year, the explorer set foot in the Bahamas for the first time, beginning one of the four cornerstone New World voyages traveled by Columbus.

On Dec. 25, 1492, Santa Maria’s crew — the flagship for Columbus' first voyage — was enjoying a night of Christmas festivities. Everyone on the crew fell asleep, leaving a young boy to steer the massive vessel through the Caribbean waters. The boy crashed into a coral reef near what is now known as Cap Haitian, Haiti.

The crew then spent the rest of their Christmas Eve night trying to salvage precious cargo aboard the Santa Maria while it sank to its demise. Eventually, Columbus built a fort in a Haitian village near the site of the shipwreck and sailed back to Spain to share his voyage with the King and Queen on the Nina and the Pinta. An interesting side note to this story is that when Columbus left for Spain, he had to leave behind almost 40 crew members at the fort, and when he returned in 1493 no crew member had survived.

The details: Clifford, who has made other notable discoveries including the notorious pirate ship the Whydah, led the undersea explorations. He was motivated by data gathered in 2003 findings of a probable fort in Haiti that was developed close to where the Santa Maria went down. Cross-referencing information from Columbus' diary with the 2003 discoveries gave Clifford a much better idea of where the remains could be.

Clifford had photographs from a 2003 underwater survey done by his team that captured images of the flagship back then without knowing it. By looking at newer underwater photos of the same vessel comparatively with the older ones, Clifford is confident that this ship is the Santa Maria. A key visible identifier from the 2003 photos was a cannon, which could have given more substantive proof of the ship's history. But the cannon and other diagnostic objects have been illegally looted from the ship.

Based on local current, the location where the alleged Santa Maria is consistent with how the the ship drifted. The underwater topography also aligns with Columbus' description. Even, the shape of this vessel's remains coincide with what the Santa Maria would resemble now in shape and size.

Next step: Excavation — an excavation that will most likely be televised. The American TV network is supporting the next phase in the investigation and the History Channel has secured the exclusive rights.

Clifford confirms that the only way to prove the wreck’s authenticity is through excavation. But that is not the only reason to bring the wreck to dry land. Clifford noted that Haiti's tourism industry may also see a long-needed boost after unearthing it.

However an excavation may actually never happen. The Titanic, the most famous shipwreck to date, still lies at the bottom of the Atlantic, but many believe that it is verging on becoming totally rust-filled rubble. In comparison, the Santa Maria is centuries beyond the Titanic in age. Only time will tell if the real Santa Maria will emerge from the sea.