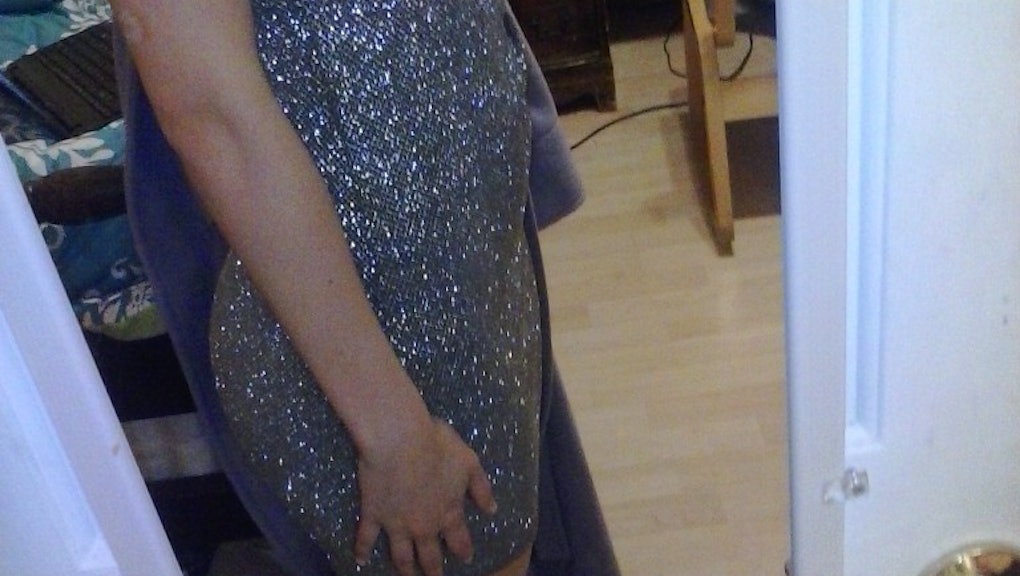 In a classic example of society's gender-based double standards, a 17-year-old home-schooled senior claims she was kicked out of her prom after chaperones worried about the effect she was having on some of the fathers in attendance. Outraged, the teen, known as Clare, went public with her story in Facebook and blog posts that have since gone viral.

In a guest post for her sister's blog, Clare explains that the dress she bought with her saved-up tip money adhered to the dress code, which stipulated that skirts mustn't be higher than where fingertips on a hanging arm reach the leg. She was stopped at the door by "Mrs. D," one of the prom's organizers, who reluctantly let Clare in after seeing that the dress was within the length requirements.

Although Clare noted that some dads in the balcony appeared to be "ogling" people on the dance floor, she and her friends enjoyed themselves for about 15 minutes. Then, one chaperone pulled her aside to notify her that "some of the dads who were chaperoning had complained that my dancing was too provocative, and that I was going to cause the young men at the prom to think impure thoughts."

As Clare's date and friends came to her defense, the chaperones "got very rude," telling them it was none of their business and threatening to kick out Clare's friends as well. Eventually, the organizers promised refunds to Clare and her group if they left the prom, but later backtracked and said they would only refund Clare.

"[The organizers should] refund my group as they verbally promised to do, and issue an apology for kicking me out of my senior prom because their husbands felt as though my body was something they had a right to control," Clare wrote.

The first problem here is the Trunchbullian way the adults appeared to have abused their authority, talking down to the students and treating them as less worthy of respect or fair treatment. More pertinently, however, this episode is a classic example of slut shaming contributing to rape culture.

The Richmond teen said she felt violated by male chaperones more concerned with judging their teen charges than with keeping them safe. By kicking Clare out, prom organizers implied that it was her duty to act demurely and dress modestly, rather than the men's responsibility to control their own thoughts and actions.

Women's bodies are seen as impure and shameful — as something that needs to be covered up lest it makes men feel lusty. Vancouver-based design student Rosea Lake captured this sentiment in "Judgments," an artwork that highlights the ways women are judged, stereotyped and criticized according to the lengths of their skirt.

As Clare points out, though, not all women look the same. Some women are tall, so dresses look shorter on them; others have large breasts, so their cleavage is more visible. That shouldn't affect how that person is respected, and body diversity should be accounted for when creating arbitrary dress rules.

"Enough with the slut shaming," Clare wrote in her blog post. "I'm not responsible for some perverted 45-year-old dad lusting after me because I have a sparkly dress on and a big ass for a teenager. And if you think I am, then maybe you're part of the problem."