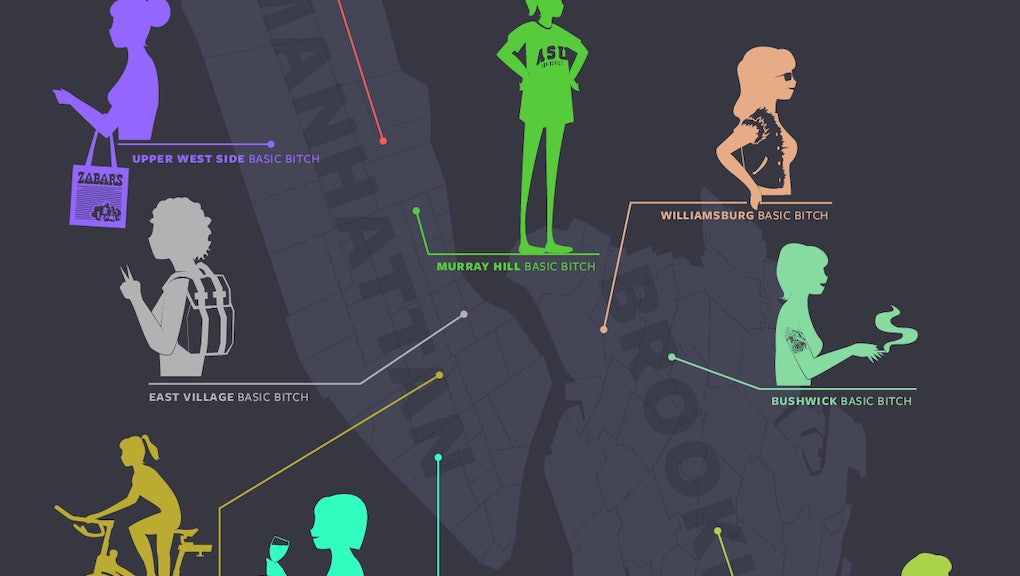 Is There Really Such a Thing as a "Basic Bitch"?

A few weeks ago, the Internet exploded with articles, quizzes and critiques about the term "Basic Bitch" — and I developed a slight obsession. Though the phrase isn't new, New York magazine's anthropological exploration of these "terminally boring" women got me thinking: Is there really such a thing as one Basic Bitch?

You'd think as a feminist I'd be dismissive of the idea, period. After all, women have a long-troubled relationship with the word "bitch" — though many of us have gone on to reclaim it, to the point that we have a feminist magazine called just that. But Basic Bitches are here to stay, their name shorthand for the the "extra-regular female" ordering a pumpkin spice latte next to you at Starbucks. It hit a nerve because it identifies a core truth, and allows us a way to laugh at ourselves: However we look, whatever our affinities and hobbies and occupations, we're not actually all that different from one another, or from the woman who traffics in the stereotype and passes as a Toms-wearing, Sex and the City-marathoning "normal."

We're all, in the end, a little bit basic. And that's liberating.

Initially, I happily dismissed the possibility of being basic myself because I don’t understand Coachella or eat frozen yogurt, but last weekend while I was in line to board the East River Ferry in Williamsburg, scarfing down two vegan doughnuts and wearing three types of denim, I heard myself say to an out-of-town friend, "I started going to Governors Island several years ago."

I looked around — and saw that I too was a stereotype of myself, and of my environment. A woman in high-waisted pants and a poncho next to me snapped pictures of the waterfront with her disposable camera while a man with a handlebar mustache spoke loudly about the quality of his cold brewed iced coffee. I was surrounded by a sea of North Brooklyn Basics, and there I was, participating in my own basic way.

I realized then that although none of us want to admit to being boring, conformist and predictable, there's nothing wrong with recognizing our most basic commonalities. In an effort to take the heat off the farmer's market-toting, hot yoga-devotees among us, I put together this list of New York City's own special blend of Basic Bitches.

The point is: With every subway ride you take, you’re bound to be surrounded by at least a dozen distinct types of Basic Bitch — not including your basic self. Might as well embrace it!

Her tone is calm despite the fact that she’s running late for postnatal yoga and the line in the food co-op is outrageous. She knows better than to be one of those people with the double City Mini stroller taking up precious aisle space, so she's got 2-year-old Silver strapped into the Maclaren and baby Lottie in the Ergo. The question is: Does she have time to drop off Silver with the nanny on the corner of Seventh and Union, race over to Fourth Avenue for yoga and make it back in time for her three and three-fourths hours co-op cashier shift?

She wears all black year-round, rolls her own Lucky Spirits and only drinks small-batch bourbon and craft beer. She left Williamsburg years ago for obvious reasons: hipsters and gentrification. Bushwick is completely different. For one thing, it's cheaper — only $850 per month for a warehouse apartment with no heat. Another thing is that it's less crowded, so she almost always gets a spot at Swallow Café, where she powers up her MacBook Air every morning. The downside? Two-hour lines at Roberta's and taking the shuttle bus when the L train stops running.

3. The Upper West Side Basic Bitch

Tired of getting yelled at in line at Fairway, she usually walks the extra three blocks to Trader Joe's and swings by Zabar's on the way home. Her new OkCupid date texts her as she's schlepping groceries up Amsterdam: "Drinks @ Jake’s Dilemma, 9pm?" She cringes. "How about Jacob’s Pickles? It's pretty cute :)" she replies, but as soon as she hits send, she wishes she'd said something cooler, like, "Actually, I know a great dive bar on the LES."

She doesn’t dress much differently than her 20-something niece in Bushwick, though she'd never admit to bearing any resemblance to an outer borough resident. She keeps pretty busy producing independent films and chasing around her private pre-school-enrolled twin boys, but she practices self-care in the form of yoga and red wine.

She walks to work in style with her Tory Burch flats, estate-inspired J. Crew necklace, Theory skinny trousers and a Louis Vuitton Neverfull bag. She’s totally down-to-earth though, so on weekends, it’s all about Hunter boots, a college t-shirt, Pizza 33 and beer!

She works at a nonprofit in Midtown, and her girlfriend is a queer urban farmer/rooftop beekeeper in Greenpoint, so there’s really no way to avoid the G train. She absolutely understands the arguments against supporting Lululemon — that company has been ridiculously offensive lately — but she can't deny the fact that their yoga pants are really durable. As long as she doesn't wear them when she bumps into her friends at the farmer’s market compost area on Dekalb, it's not an issue.

The "Drunk in Love" remix helps her get through the intense "hills" in her SoulCycle class. "I am 1,000% adding this version to my Cardio Spotify Playlist," she promises herself. Naturally, her body needs two crucial nutrients — carbs and protein — for a post-Soul recovery snack, so she grabs a green smoothie with whey powder. She knows it’s basic to Instagram it, but, "Tastes like vanilla ice cream, kind of insane. @soulcycle #cleaneating."

Two words come to mind when she thinks of the Brooklyn Flea: over it. But that doesn’t stop her from taking her latest Tinder date to Smorgasburg for a flight of Oji-style iced coffee. She’s wearing a casual white t-shirt, high-waisted denim cutoffs and Warby Parker glasses. She’s already bored of her super short bangs and hopes they’ll grow out by the summer.

Her gay male BFF bought a Herschel backpack a while ago when he realized that Jack Spade briefcases were becoming basic. She copied him (with his permission), but opted for the bird print instead of navy blue, which was a giant mistake because now everyone thinks she’s an NYU student and she totally isn’t (anymore)!

10. The Upper East Side Basic Bitch

It took her a few months of "accidentally" leaving her "Some Day" wedding planning Pinterest page open on her boyfriend’s computer before he finally got the hint. But sure enough, just as she'd hoped, he hired a secret photographer, took their dogs (Troy the Golden Doodle and Barley the Maltipoo) to Central Park and asked her to meet him under the Bethesda Terrace. When he popped the question with a princess-cut halo engagement ring, she said yes!