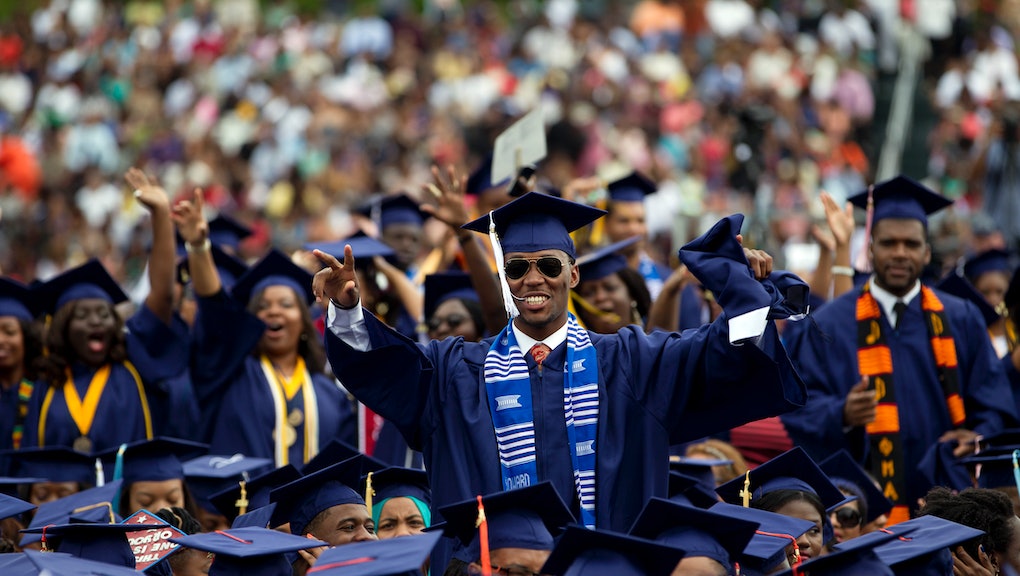 When President Obama laid out his agenda last December to tackle income inequality, he did so at Town Hall Recreation and Arts Education Center in a low-income neighborhood in Washington, D.C. What the symbolism of the venue didn't communicate on its own, the substance of his speech did: The president sees education as a key weapon against inequality.

Since then, Obama has called inequality in education "a major barrier to reducing income inequality." He's given specific, if politically unrealistic, goals to reduce the former to fix the latter. Chief among them is that Obama wants a lot more Americans to go to college. Currently ranked No. 12 worldwide, he wants the United States to be No. 1 in college education attainment by 2020. He wants to achieve this goal by, among other means, lowering the costs of attendance for lower and middle-income students.

But there's a hitch: According to researchers at the Public Policy Institute of California, improving America's educational outcomes will do little to mend the income gap.

Yes, the educated are paid more than the less educated. Workers with a high school education made $15.02 an hour in 2012; those with graduate degrees that year made $31.02, according to PPIC analysis of 30 years' worth of Census data.

But the nonpartisan think tank's Hans Johnson and Marisol Cuellar Mejia see a cautionary tale within that data.

The income gap among less-educated people shrunk. Between 1979 and 2012, the wage gap between the top and bottom 25% of workers with only a high school education actually dropped from $11.14 an hour to $9.75. And the same equalizing trend was true for workers with less than a high school education. That is, the gap between the top and bottom 25% fell from $9 to $6 during the same time period.

But the incomes among the more-educated population have become increasingly unequal.

"I think it's worth realizing that all the discussion on income inequality wouldn't go away if we increased educational attainment levels," Johnson told PolicyMic. "We'd still have large differences between workers."

The PPIC demographer says he doesn't want his research to imply that it's a bad idea to go to college.

"It's a good idea," he says. "Having said that, people shouldn't think that college is a golden ticket, that it's going to ensure a lifetime of success."

But what could reduce those gaps, he says, is providing prospective students more consumer-type information about the wide — and growing wider — range in pay they should expect from pursuing different areas of study.

Students at the same college studying different subjects increasingly face very different job opportunities after graduation. And, for that matter, computer science graduates at one school might be significantly more likely to nab high-paying jobs than comp sci students at another.

Being offered that type of information could allow students to choose areas of study with more foresight about what they'll likely be paid after they graduate, a potential solution, Johnson says, to the growing inequality among the educated.

To its credit, Obama's Department of Education has tried to make the financial implications of picking colleges and majors more transparent. Its College Scorecard site publishes how much schools cost, how much debt the average student takes on to attend them, their respective rates of graduation and loan defaults.

But more than a year after it launched, there's a vital piece of information missing from the Scorecard: what kind of jobs students get when they graduate.