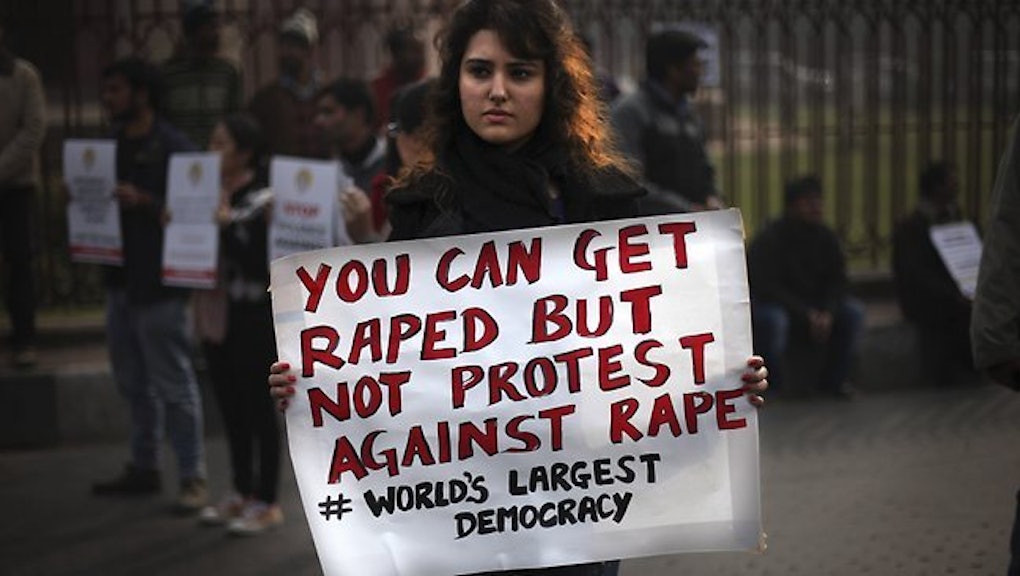 A case just decided in the Indian court system has once again highlighted the grave and challenging problem of marital rape in the country. On Tuesday, a Delhi judge ruled that rape laws do not apply to married couples; once a man and woman are legally wed, forced sex is no longer a crime.

The details of the case are these: Last year, a 21-year-old woman who lived near New Delhi accused a man of drugging her, getting her to sign marriage documents and then having sex with her while she was intoxicated. Though this case has been challenged because of alleged inconsistencies in the woman's account, as well as a lack of evidence, the ruling makes India's official line on marital rape very clear:

The prosecutrix (the wife) and the accused being legally wedded husband and wife, and the prosecutrix being major, the sexual intercourse between the two, even if forcible, is not rape and no culpability can be fastened upon the accused.

Indian women's rights groups have for years campaigned for women's right to refuse sex. And arranged marriages, where marriages are fixed more by the consent of the family rather than an active choice of the woman, are still relatively common. In these types of situations, a lack of marital rape laws further hurt women's power to challenge her husband, who is culturally considered to be her protector.

Interestingly, there are strict laws against domestic violence, meaning a woman may have more luck showing up in a court with a black eye than saying she was raped by her husband. Image Credit: United Nation's Women Progress Report

A United Nations Population Fund survey of married Indian women in early 2000 showed that two-thirds claimed to have been forced into sex by their husbands. In 2011, a similar study released by the International Center for Research on Women said 1 in every 5 Indian men surveyed admitted to forcing their wives into sex.

The decriminalization of marital rape places India in an unenviable group of peers: China, Afghanistan, Pakistan and Saudi Arabia, to name a few, are all countries that do not prohibit forced intercourse. As of 1993, every state in United States has criminalized marital rape.

After a brutal gang rape in Delhi made international headlines in December 2012, Indian laws for crime against women, including stalking, voyeurism and acid attacks, were all made much stricter, yet marital rape still remains a conspicuous failing point.

When sexual assault laws were being changed last year and a new bill launched, the Justice Verma Committee, a three-member panel appointed to suggest amendments, wrote that "marriage should not be considered as an irrevocable consent to sexual acts." But the government rejected the proposal.

In an unfortunate and blatant double standard, if the reverse happens — a woman denies sex to her husband — Indian courts may grant the husband a divorce, as the wife is seen as not upholding her part of the marriage contract.

Continuing with such a regressive belief hurts India's reputation when it comes to the safety and rights of its women. Though criminalization of marital rape leaves a lot of loopholes that can be exploited for personal gain, lack of laws against it are a bigger problem for hundreds of women who have to remain silent despite the abuse.

If India really wants to stand tall on women's rights, it needs to change it's position on marital rape, giving the issue the serious treatment it deserves.