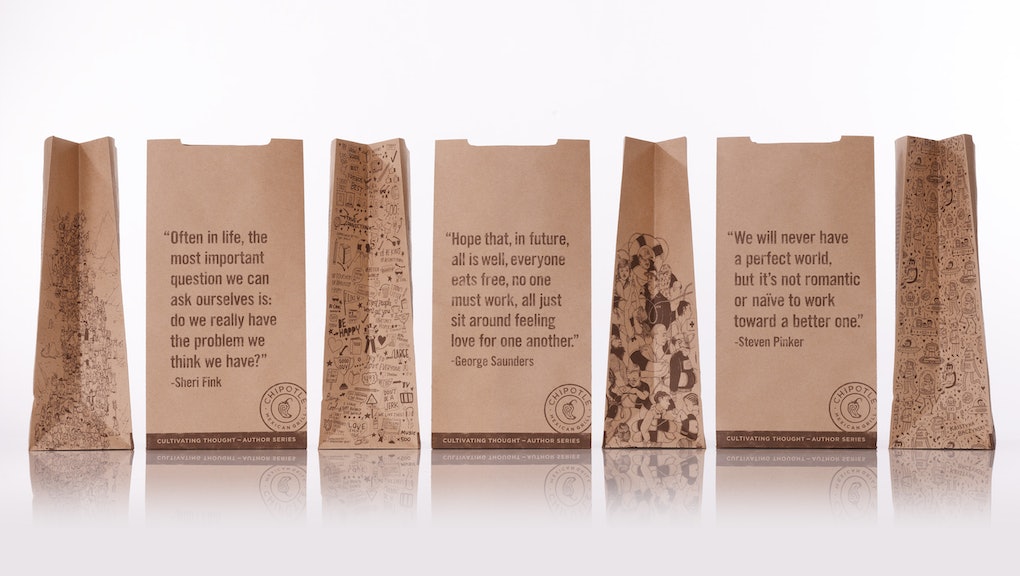 Your Chipotle Lunch Is About to Get a Lot More Sophisticated

Chipotle addicts, your lunchtime is about to get a lot more literary.

Few loves run as deep and true as America's Chipotle obsession. Now the love of burritos and the love of words will unite in one powerhouse of a cultural intiative that Chipotle is calling "Cultivating Thought."

The "Cultivating Thought" project brings the words of 10 of today's most influential writers, actors and comedians onto the bags and cups of Chipotle products. The lineup includes:

Spearheaded by Foer, the initiative is getting a few eyerolls on the Internet, but is a pretty revolutionary way to bring high-quality writing and thought-provoking ideas to the masses — not to mention a brilliantly sneaky way to introduce people to literary minds. If the choice is a bag with nothing on it, marketing copy or an essay by George Saunders, why not go for the thought-provoking reading matter?

"We live in a world in which there is shrinking space for literature and writing, and less time than ever for quiet reflection," Foer said in a statement. "The idea of expanding the space and time, of creating a small pocket of thoughtfulness right in the middle of the busy day, was inspiring to me — particularly given the size and diversity of the audience, which is America itself."

In an interview with Vanity Fair, Foer also brought up the social element of the initiative, mentioning that many people people who have access to Chipotle might not have access to bookstores or libraries.

Foer has faced questions about his involvement in large part due to his vegetarianism; his book Eating Animals famously investigates the origins and effects of carnivorism. "I got to know quite a bit about the company, not in the process of doing this, but in the process of [writing] Eating Animals. Chipotle was pointed to quite often, as a model of what scaling good practices might look like," he said.

The two-minute reads, as they're being called, will be on the back of your cups and bags starting Thursday. As writer Michael Lewis put it, "It's delightfully bizarre to try to get people to read their cups." As as you order your burrito bowl, get ready for some beautiful words to accompany your meal — a two-minute essay on the back of a bag might prove way more thought provoking than another scan through your inbox.

I spend too much time trying to spend less time. Before trips to the grocery store, I'll waste minutes debating whether it is more efficient to make a list, or simply race up and down the aisles grabbing things. I spend what feels like decades in airport security lines trying to figure out how to get through most quickly: should I put the plastic bin containing my belt and shoes through the bomb detector before my carry-on bag, or after? And why sit patiently waiting for the light to turn green when I might email on my phone? I've become more worried about using time efficiently than using it well.

But in saner moments, I'm able to approach the fourth dimenstion not as a thing to be ruthlessly managed, but whose basic nature might be altered to enrich my experience of life. I even have tricks for slowing time — or at least my perception of it. At night I sometimes write down things that happened that day.

Recording the quotidian details of my day seems to add hours a day to my life: I'm not sure why. Another trick is to focus on some ordinary thing — the faintly geological strata of the inside of a burrito, for instance — and try to describe what I see. Another: Pick a task I'd normally do quickly and thoughtlessly — writing words for the side of a cup, say — and do it as slowly as possible. Forcing my life into slow-motion, I notice a lot that I miss at game speed. The one thing I don't notice is the passage of time.