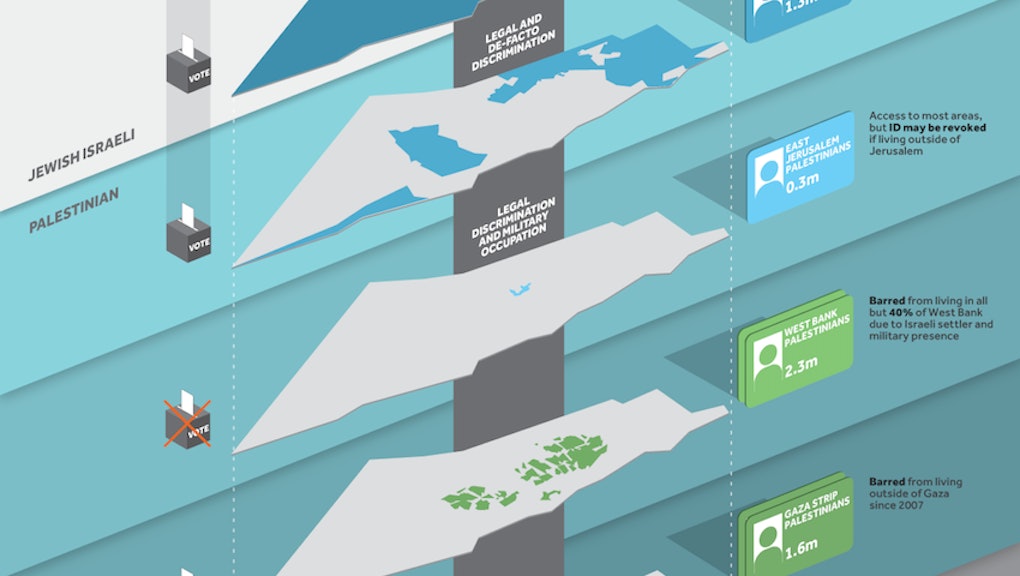 Back in 2007, a short film called West Bank Story won an Academy Award. The musical parodies West Side Story — telling a Romeo and Juliet-style tale of a Palestinian girl who falls in love with an Israeli soldier. The girl, Fatima, works at a restaurant called Hummus Hut, which is warring with the neighboring Kosher King, owned by Israelis.

The rivalry between the two restaurants — which manifests itself through childish pranks and, eventually, a musical number in which the Israelis build a wall while the Palestinians prepare molotov cocktails to destroy it — reflects how Americans might see the story of life in Palestine and Israel: a long-standing grudge between two similar neighbors who need to just learn how to live peacefully next to one another.

But this vision does not show the whole truth. As this new infographic by Visualizing Palestine demonstrates, the people living between the Jordan River and the Mediterranean Sea aren't controlled by two distinct authorities. Across the whole territory, it's just one that really calls the shots.

One of the key mechanisms of control by Israeli authorities is the issuing of ID status. Throughout the territory, an individual's rights and freedoms are dictated by where they were born. Palestinians with Israeli citizenship — often referred to as "Arab Israelis" and who make up 20% of the Israeli population — face institutional discrimination. Though, they do have a better deal than Palestinians in the West Bank or Gaza, who are often confined to these occupied territories. Those from East Jerusalem can travel more freely, but if they move out of the city their status can be easily revoked.

Image Credit: AP. A view of Shuafat, in East Jerusalem.

That means that for Palestinians — even those that live in the areas that some might see as Palestinian territory — Israel controls some of the most basic aspects of life. In the West Bank, Israeli authorities have total or partial control over 82% of the territory, giving the Palestinian Authority jurisdiction only over the 18% called Area A. But even in this space, Israel takes the reins. It controls most of the West Bank's water, for example, and even collects taxes on behalf of the Palestinian Authority. And crucially, Israel has the sole power to grant citizenship and residency status across the whole territory.

"When I go abroad, people I meet think Israel and Palestine are two separate lands," Ramzi Jaber, co-founder of Visualizing Palestine, told PolicyMic. "But that’s not the case. It’s one single border that's controlled by a single authority. It's one single currency, Israeli Shekels. It’s practically one economy, a captive economy with 70% of Palestinian imports coming from, and 86% of exports going to, Israel. Most importantly of all, there’s one single population registry controlled by Israel's Ministry of Interior."

The contiguity between what the world sees as Israel and Palestine being is blurred further all the time. In 2012, the UN estimated more than 500,000 Israeli settlers in the West Bank and East Jerusalem — areas that are supposedly under negotiation as territory for the future Palestinian state. And that number only continues to grow. In 2013, the rate of Israeli settlement construction increased by 123%. Like everyone else in the territory, both settlers and Palestinians in those areas live under the same Israeli population registry, but with very different rights.

Image Credit: AP. An Israeli settlement in the West Bank.

"No matter if you're Jewish, Christian, Muslim, Druze, or any other ethnicity, if you're on the population registry that's the thing that defines you as a resident, across one entire piece of land," Jaber said. "De facto, now, this piece of land is one state."

On Thursday, Palestinians everywhere commemorate Nakba Day, the anniversary of the cataclysmic events that lie at the root of their present situation. Nakba is the Arabic word for "catastrophe," and it refers to the events of 1948 that saw some 750,000 Palestinians expelled from what is now Israel, in what many call an act of ethnic cleansing which created the Jewish state. All over the country, the memory of the Nakba can now be found in the ruins of Palestinian villages and towns that existed before 1948. And whether they were born in Gaza City, Nablus or Haifa, or even beyond the border of historic Palestine, it is still a defining reality for millions of Palestinians today.

On this particular Nakba day, the 66th anniversary, the latest round in peace negotiations have fallen apart spectacularly: By April, even U.S. Secretary of State John Kerry had admitted it was time for a "reality check," his ambitious resolve to fix the conflict apparently broken.

As a giant question mark continues to hang over the peace process, the idea of Israel and Palestine as two states and neighbors feels increasingly unlikely. What is certain is that the unequal reality reflected in the infographic continues – and it's time for the world to finally acknowledge it.