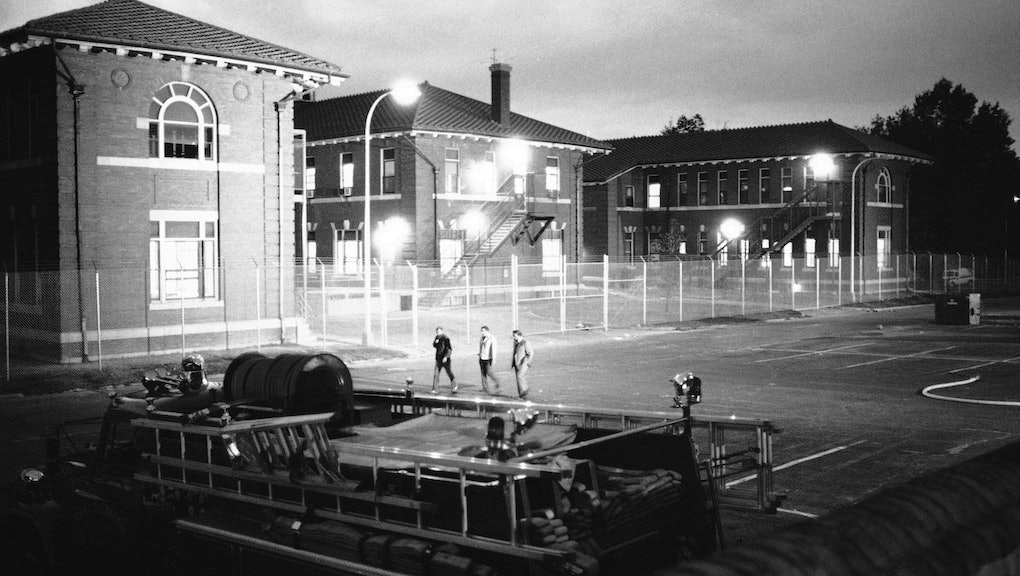 Ryan Carroll, one of the facility's music therapists, told PolicyMic it's one of the most popular songs in his hospital community, which includes schizophrenics, the criminally insane and individuals with mood, anxiety and personality disorders. They don't listen to it like most of the song's fans, though. Carroll uses the song in his sessions to frame discussions around the nature of happiness. Few songs prompt such obvious and direct discussions, but Carroll has found that the song increases patients' insight into their mental states. When you've forgotten what it feels like to be happy, hearing someone tell you what it means to them is a huge help.

People outside of mental institutions listen to music to control their moods all the time. Computer applications tailor music selection and discovery tools to your mood, turning songs into medication. That's because, for patients and healthy individuals alike, music is a tool to hear yourself. Nowhere is that clearer than inside the walls of our nation's mental health institutions.

Some hospitals have full-time staff just to manage the music selection and programs. Music is a fundamental feature of "normal" life and can help build patients' self-confidence and trust in the hospital system and its staff — something that otherwise can be seen as part of a scary system. Music helps patients feel more self-confident and less isolated — it offers them a sense of control over their minds and lives. Research has even shown that music can reduce the frequency of auditory hallucinations for some schizophrenics.

But for all its power, music can be dangerous, too. "Sometimes it can make [patients] hallucinate more, hear voices more, see things more," said Dr. Bumanis, director of communications for the American Music Therapy Association and a licensed music therapist who worked at Clifton T. Perkins Hospital for 23 years. "You can just tell they're not ready for that kind of stimulus." It's so forceful, in fact, that psychiatric patients are screened before they receive music therapy to see whether or not they can handle it.

Part of that screening depends on a patient's personal preferences. "The music that works for you isn't the same as the music that works for me," said Carroll. But patterns do emerge — the most reliable music for reaching patients is often songs from old soul and R&B crooners like Smokey Robinson, Otis Redding and Sam Cooke. "These come up a lot because they're familiar. Familiarity of music ... increases accessibility, and music that's accessible can help promote those changes and treatment goals."

That includes even the most intensely negative songs. One of Bumanis' patients once brought in the Ice-T song "Cop Killer" to share. Even though it has violent lyrics ("I'm 'bout to kill me somethin' / A pig stopped me for nuthin'!") Ice T's song actually had major therapeutic value as it allowed the patient to talk about his violent urges. Bumanis noticed patients were much more comfortable opening up about these feelings when discussing them in the context of the music. Music let them connect to feelings they couldn't express.

It fosters conversations between patients, too. A little while ago, Carroll had an older and a younger patient he wanted to bring together. So, he played them MKTO's "Classic." At first, the song seems like it has zero therapeutic value. But when the old man realized the young man didn't know all the classic artists the song named, he took it upon himself to explain. Somewhere between Sinatra and and the synthesizers, they found each other.

In addition to listening to it, playing music had clear therapeutic value as well. Dr. Bumanis had a patient who played the same note over and over again on the piano. As Bumanis helped his client increase the number of notes he would play, he noticed his client's anxiety decreased. He became more social and began to communicate more. Carroll witnessed a similar transformation. He and a group of patients were playing together. Suddenly, the guitarist dropped his instrument and began rocking back and forth violently on top of it. The other patients realized he was rocking in time to the beat, so they slowed down their playing. When they did, he stopped. Afterwards, they all celebrated together.

"A lot of what we do is reality orientation," said Carroll. "Music happens in the moment, as you play it, and you see it, and you play it all at once ... in those moments it's providing something more real than any internal response, any delusion or hallucination, music becomes more real."