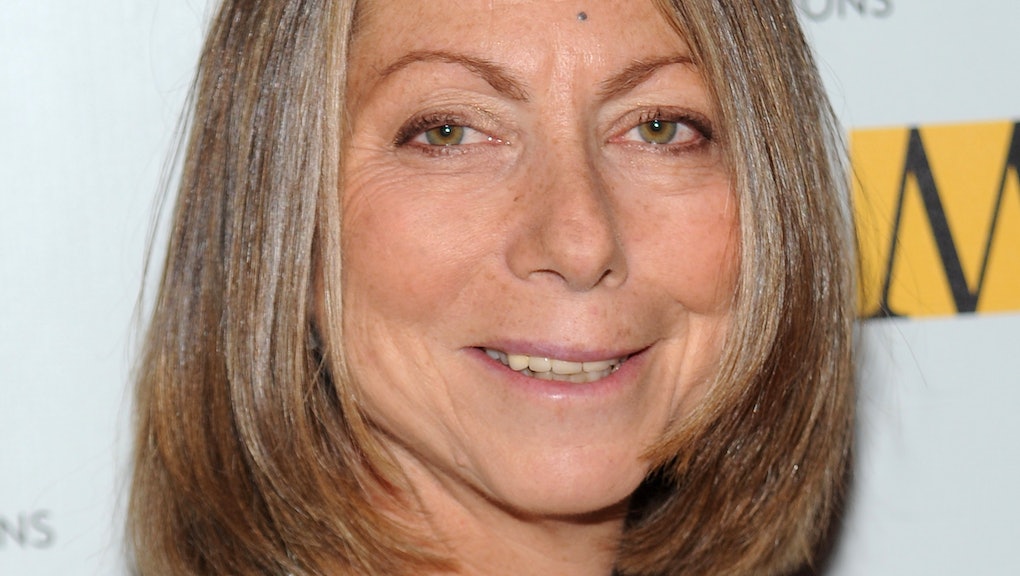 Wednesday afternoon's sudden meeting in the New York Times’ newsroom has sent waves through the world of journalism — and led some to cry sexism. In an announcement that spread quickly on the Internet, staffers learned that Abramson, the Times' first female executive editor, had been fired and replaced by her deputy, Dean Baquet, now the paper's first African-American executive editor.

Abramson was not at the meeting, and the Huffington Post noted that she was erased from the paper's masthead immediately after the abrupt announcement.

Times publisher Arthur Sulzberger, Jr. admitted that Abramson’s departure was not voluntary. In his remarks, provided to media outlets by a spokesperson, he implied that the firing was due to management issues, explaining, "New leadership will improve some aspects of the management of the newsroom."

Abramson has not been available for comment, save the prepared statement released to the public on Wednesday: "I’ve loved my run at The Times. ... I got to work with the best journalists in the world doing so much stand-up journalism."

Although the exact reasons for the abrupt dismissal — Abramson had five years left before Times guidelines would have forced her to step down to her age — are not yet clear, speculation is rampant.

"A lot of accumulated backbiting" is one possible reason for Abramson’s firing. Sulzberger, like most publishers, may not have liked his editor promoting herself as the face of the paper. Maybe he found her Times "T" tattoo on her back distasteful. Citing a source "close to Sulzberger," New York magazine commented that Sulzberger "does not like people who promote themselves. ... There was a threshold that was crossed" — namely with Abramson's interview with Alec Baldwin on the latter's NPR show, Here’s the Thing.

There was also a question of a possible rift in Abramson and Sulzberger's relationship, perhaps caused by personal differences, perhaps by differing visions for the editorial team. As Bloomberg's Edmund Lee reported, "Sulzberger and Abramson hadn’t been getting along for at least the past few months, according to the people, who cited a fundamental conflict of personalities ... He had reservations about her loyalty, as he had seen her as part of the earlier editorial regime headed by Bill Keller, who left the paper this year."

But what has really fired up the feminist blogosphere is the suggestion that some of the "backbiting" was due to Abramson's discovery of a pay gap, including pension and benefits, that existed between her and the Times' previous executive editor, Bill Keller. The New Yorker depicted the consequential confrontation between Abramson and Sulzberger as the straw that broke the camel's back. "'She confronted the top brass,' one close associate said, and this may have fed into the management’s narrative that she was 'pushy,' a characterization that, for many, has an inescapably gendered aspect."

The issue of a possible pay gap aside, there is something unsettling about Sulzberger's remarks about Abramson's management style that speaks to a larger issue concerning women in the workforce, and particularly women in management positions. The lack of history and the subsequent lack of precedent for women in terms of management means not only is there no proven effective model for women in management positions, but also that there is no model for those serving under those women managers. Sexism is apparent in this lack of understanding, as articulated as Abramson's "problem" of being abrasive or "pushy."

This sentiment, too, reared its ugly head in Baquet's "thanking" of Abramson during his first speech as the Times' new executive editor, which reads more like a parting shot about Abramson's Lady Macbeth-like "ambition" and "humanity," as reported by the Times: "Mr. Baquet thanked Ms. Abramson, who was not present at the announcement, for teaching him 'the value of great ambition' and then added that John Carroll, whom he worked for at the Los Angeles Times, 'told me that great editors can also be humane editors.'"