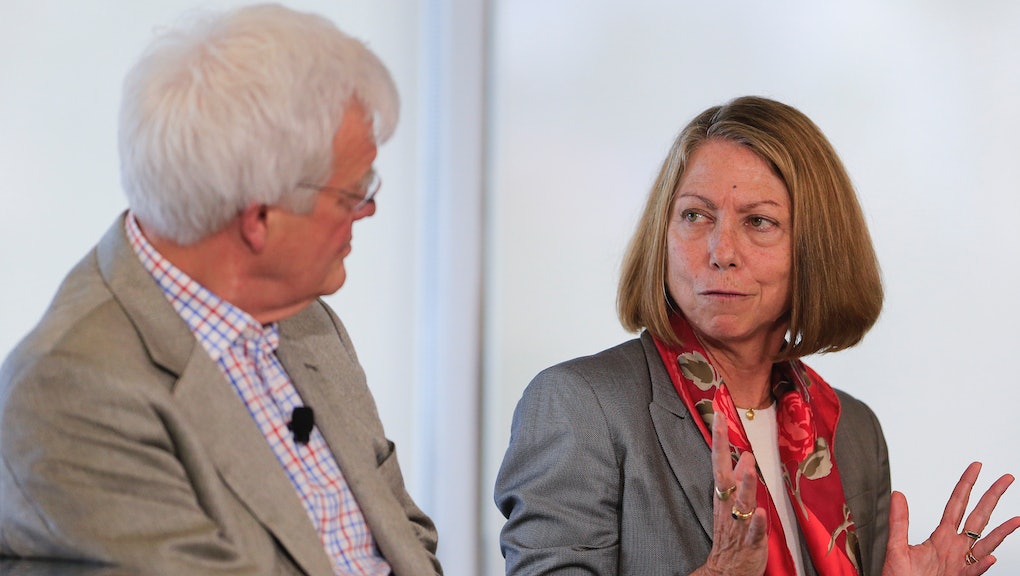 What It's Like to Be a Female Leader in America, in 5 Charts

There's been a lot of guesswork about New York Times Executive Editor Jill Abramson's abrupt firing, but reporters sounding off should know that speculation is the cardinal sin of journalism.

This is a PR nightmare for the Times (and more significantly, a leadership failure on publisher Arthur Sulzberger's part), and there are many remaining questions regarding Abramson's departure. We may never know what happened behind closed doors, but we do know that Abramson was considered "pushy" and "brusque," two words rarely used to describe male leaders. Other than her "temperament" problems, another storyline that has emerged is Abramson recently discovered she was being paid significantly less than her male predecessor Bill Keller.

But enough with the he-said-she-said. Here's a look at what we do know about female leaders in America.

Despite all of our gains, women are still not taken as seriously as men in the industry. We may be getting better jobs and better pay, but in a lot of ways, media is still a sexist field. According to an exhaustive study by the University of Denver, only 23% of top-level positions in journalism and media like executive editors, creators, producers and directors are held by women. Of the 25 largest daily newspapers in the U.S., only one publisher is female. When it comes to radio, the numbers are even worse. Some studies even show that some of those numbers have been going down.

Given that so few managerial positions are held by women, it's no surprise that newsrooms are still male-dominated. Research that came out last week from the School of Journalism at Indiana University shows that numbers have remained stagnant since the '90s.

So the more successful women are, the less they are liked, which puts many female leaders in what researchers have called a "double-bind."

It's hard to measure and represent workplace 'intangibles' like likeability, but this chart from Business Insider highlighting the most common Google searches with the term "bossy" serves as a fine proxy.

3. The wage gap exists in media as much as anywhere else.

Women are not only a minority within journalism, but they also get paid less. Even when female editors occupy most high-level and senior positions, like they do in the magazine industry, executive editors make 25.2% less than their male counterparts.

Researchers at the University of Indiana found there is a massive discrepancy between the wages of women and men at every level. Women with 10 to 19 years of experience see the biggest wage gap, leaving them with a 21.4% salary difference with men who have the same level of experience.

In most industries where half of workers are female, only a small percentage make it to the top. It's curious that on many levels, women make better leaders. Whether we're looking at one's ability to motivate others, take initiative, build relationships or achieve and stretch goals, women score significantly higher. Data also shows that female leaders are more profitable.

5. Female leaders are more likely to get fired.

We all know how the glass ceiling impacts female leaders, but what about the glass cliff? The data shows that women aren't just more likely to run into barriers on their way to the top, they also face a greater risk of being terminated than their male counterparts. Over the course of the past decade, if you look at the 2500 largest public companies in the world, almost 40% of their female CEO's were fired, compared to only 27% of males in the same position.

The reason? Female leaders tend to be assigned to top positions when a company needs saving. They are less likely to be insiders, and they are criticized more harshly for their failures. This pattern is what led researchers to come up with the "glass cliff theory."