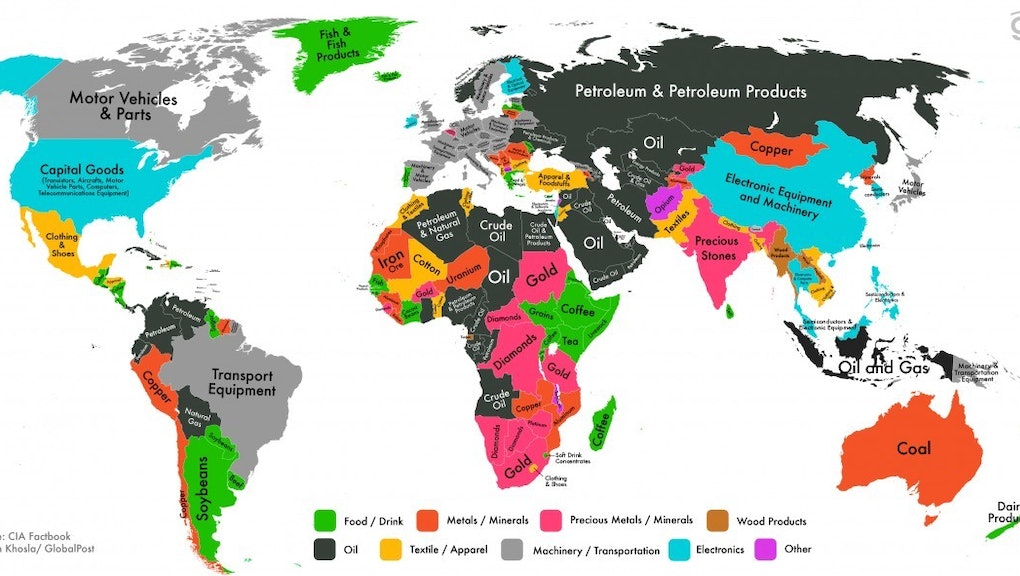 What One Product Makes the Most Money For Each Nation? Check This Map

The export topography of each country's most valuable product demonstrates where countries trading in the world market are yielding financial gains. Although some are extremely obvious, other countries benefit financially from unlikely sources.

Predictably, oil is the most traded commodity in the global market. It is also the MVP of exportation, as the highest-valued product sold abroad in nearly 40 countries.

After mining data from the CIA's World Factbook, Global Post assembled a map illustrating each country's top exports, according to their worth on the international market. Here are the key conclusions:

The Middle East and Central Asia make the most money from selling oil and its derivatives.

For Asia, the foremost exports are manufactured goods, including electronics equipment (like cell phone parts), apparel and wood products. Other than copper and precious stones from a select few countries, natural resources hardly appear on the region's map.

The workshop of the world is definitely Europe, which produces mostly machinery, transportation equipment and motor vehicles. "The type of machinery," the Global Post reports, can range "from optical instruments to BMWs."

In South America, transportation equipment also dominates as the top commodity, but that is mainly because that is the No. 1 traded item for Brazil, the largest country in the region. Brazil's neighbors mainly sell oil, soybeans and copper.

An assessment of the map happens to show that the most valuable traded commodities per country in the globe are fairly logical. Asia is well-known for creating, assembling and shipping out the majority of the world's electronic equipment. Many remember the now-debunked Mike Daisey story about Foxconn, which exposed the fact that a great deal of iPhone parts are made in factories in China. Regardless, the surprising factoids the map bears, like that Niger's product is uranium, gives insight into what the internal resources of each country actually are.