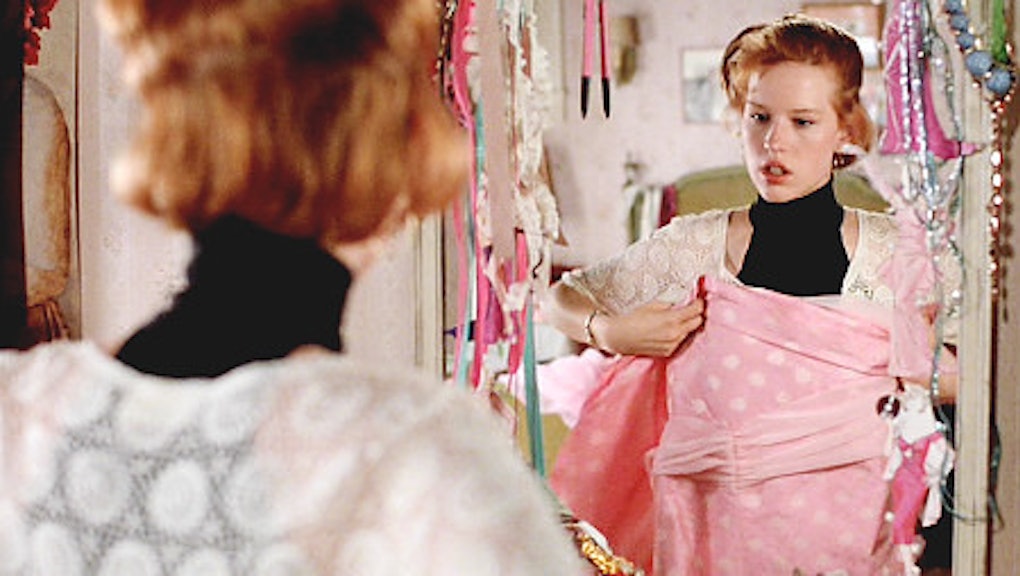 How 20-Something Women Dressed in America, in Every Decade

Women's fashion mirrors social change. The pared-down simplicity of dresses in the early 1940s reflected the austerity of wartime; the shiny sparkle of the 1980s mirrored the opulence of Wall Street and the flash of MTV.

A look back at what women were wearing over the last 11 decades tells a story about the history of women, how each decade contributed to women's fight for empowerment and enabled women to achieve freedom of expression.

Here's a look at how 20-something American women have been dressing for the last 100 years.

World War I took resources away from the luxurious haute couture of the previous decade. The latter half of the 1910s saw women wearing simple, practical garments instead. Softer silhouettes marked the beginning of the end of rigid corsets and a more androgynous style that mirrored the effects of the war and, quite fittingly, coincided with the height of women's suffrage.

Women in the U.S. earned the right to vote in 1920. That independence and individuality was reflected in the loose fit and revolutionary shapeless quality of their clothing. For the first time, young women decided how to portray their own femininity.

The "flapper" look was loose and shapeless with dresses that flattened women's busts and hips. It was a period of youthful rebellion, raw energy and searing modernity that led to short hair and shorter hemlines.

In the 30s, fashion met the severity of the Great Depression, which marked the beginning of what many consider to be modern style. For many Americans, glamour was no longer attainable and fashion became serviceable and functional. It featured longer hemlines and an abandonment of 1920s romanticism.

Fashion, in a haute couture sense, focused one again on enhancing the body, not restricting it.

Unsurprisingly, the austerity of World War II brought even more restrained clothes as materials were rationed. While in Hollywood it was an era of extreme glamour, to every day Americans it was war time austerity.

Utilitarian dressing took form in comfortable slacks and blazers worn by women in their 20s, and thanks to cloth rations, uniforms were seen more readily in daily life. Yet the growing influence of glamorous Hollywood furthered the gap between the reality and fantasy of how women in the 1940s should dress.

Victorious in war and settling into a popular and powerful position globally, the U.S. finally opened its doors to a more frivolous play with clothing. Women of the decade were able to indulge in the exuberant femininity of Christian Dior's "New Look": a small nipped-in waist and full skirt that emphasized a full bust and hips. Most importantly, teens became a fashion force as their poppy energy infected the nation.

The youth were the leaders of the 1960s. Women's fashion reflected the subcultures emerging from youthful rebellion: mod (sleek and stylish), rocker (leather-clad) and hippie (casual and undefined). The '60s broke many fashion traditions, namely spawning multiple acceptable looks for the first time.

As the hippie counterculture spilled over into the '70s, women's clothing continued to have a more fluid look. Increased ease of travel meant fashion became more globally inspired, through prints and accessories. Heightened social revolution saw the politicization of fashion through things like black women's afros. And increased giddiness heightened by disco fever put 20-something women in tight, stretchy and shiny clothes made for dancing under the disco ball.

Material girls, indeed. The United States experienced an economic boom, women entered the workforce in sheer force, and with it came a very aggressive idea of power dressing (see, shoulder pads). The rise of the video star on MTV, i.e. Madonna, meant women everywhere had a new, liberated ideal to dress towards. Meanwhile, punk fashion with its black leather, Doc Martens and flannel rose up as a reaction to the materialism of the decade and a precursor to '90s grunge.

By this time, young women had become used to having some sort of fashion counter-culture. In the '90s, that was a combination of grunge, hip-hop and rave. All those counter-cultures favored baggier clothes and more masculine undertones than mainstream fashion — whether over-sized flannels or wide-legged pants. Overall, fashion became more casual and severely minimal, reflecting the carefree attitude that came with a surging Dow, an abundance of science and innovation research and the explosion of the Internet.

This was a decade marked by women wearing recycled, mashed-up fashions. Vintage/thrift became cool, '80s styles saw a revival and "boho" clothes inspired by ethnic prints mirrored a new globalized marketplace. The style was hard to define and mirrored a national uncertainty fueled by deficit, two wars, the collapse of the banking system and the somber realities of 9/11 and Hurricane Katrina, to name a few.

As 20-something women embraced neofeminism, which celebrates the inherent differences between male and females, we've also embraced a skinny jeans silhouette that details our curves while "leaning in" (couldn't help it) and wearing our tight, fiercely feminine denims on casual Friday. At the same time, hipster fashion has become an oxymoronic mainstream counter-culture in its own right.