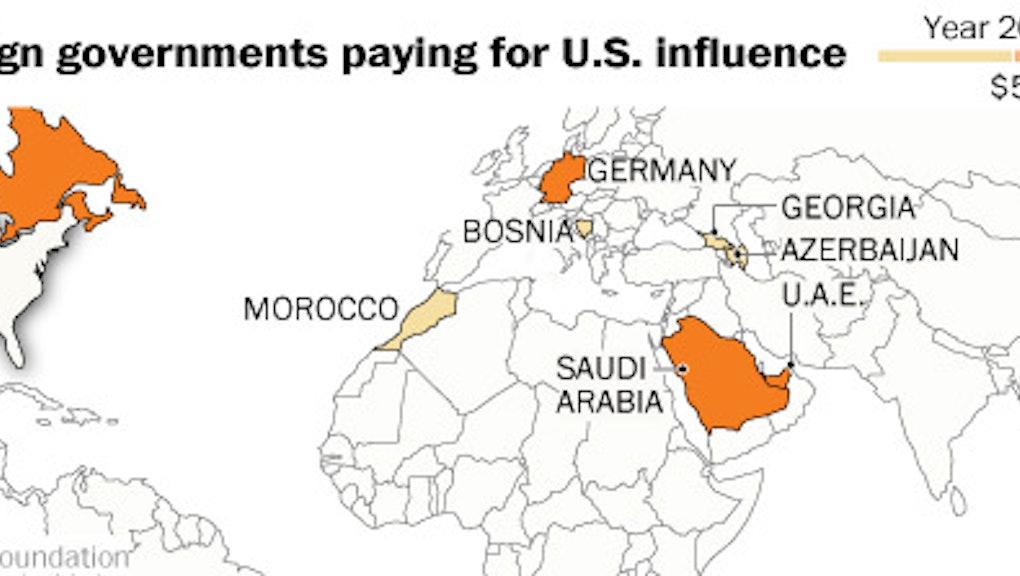 The 10 Foreign Countries That Spend the Most on Influence in Washington, D.C.

The news: These 10 foreign governments are spending the most money to make themselves influential among members of the U.S. congress, according to an analysis from the Sunlight Foundation that examined foreign lobbying disclosures.

The fantastically oil-rich United Arab Emirates (UAE) is in the lead, spending $14.2 million. But Germany and Canada aren't far behind, while Saudi Arabia come in fourth place.

Notably, Israel is at a distant $1,250, possibly because of a well-established domestic pro-Israel lobby that isn't directly sponsored by either government. The American Israel Public Affairs Committee alone spent close to $3 million on lobbying in 2013.

The background: Sunlight's Bill Allison told the Washington Post that for some countries, "It's like renting a diplomatic corps when they hire foreign agents," explaining that many of the listed nations lack strong diplomatic ties. But trade treaties and huge business deals like the Keystone XL pipeline can lead to lobbyists directly petitioning on behalf of a foreign government. And then there's energy interests, hence Dubai at the top of the list.

Keep in mind that these kinds of lobbying expenditures aren't necessarily malign, but they do represent the types of foreign interests Americans might want to know about. Georgia, for example, went to war with Russia in 2008 and is now trying to consolidate relations with the United States. It may be spending even more now that the region has been further spooked by the Ukrainian-Russian territorial dispute. Canada has an immense interest in the Keystone XL pipeline. And the UAE wants help with "illicit finance issues" and "a pre-clearance customs facility."

Why you should care: The numbers above are all on the books, but in an age of murky campaign finance, foreign governments may have the opportunity to influence American politics more directly. OpenCongress worries that the lack of disclosure requirements in super PACs since the Citizens United decision could mean that foreign donations would be harder to affect, meaning that foreign governments could potentially influence U.S. elections. And the Sunlight Foundation warns that while the Supreme Court affirmed in 2010 that foreign nationals are prohibited from contributing to U.S. elections, holes in campaign finance laws could mean foreign spending would never be detected.