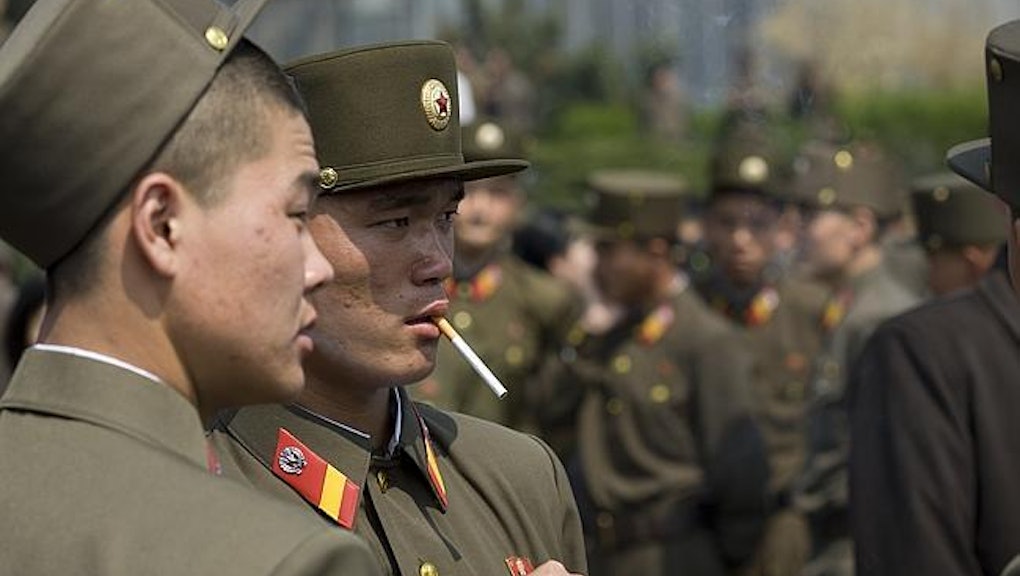 North Korea is a country rampant with poverty, censorship and the worst human rights violations in the world. In the West, we typically see only rare glimpses of what daily life is really like in North Korea, but now we have jarring photographic evidence of harsh reality for North Korean citizens.

Photographer Eric Lafforgue was on a mission to visually document daily life in the communist country. After being banned in 2012, Lafforgue is now exposing the forbidden images he captured during his most recent visit to North Korea. From malnourishment to child labor to extreme lifestyles, the photos paint a haunting picture of the quality of life North Koreans suffer through.

"Life is brutal in many places of North Korea, far from the Western standard," Lafforgue told news.com.au. There is minimal public transportation, power outages are common, food is limited and safety standards are almost non-existent. Lafforgue captured the photos in the presence of state officials but was instructed to delete them. Fortunately, he saved them on digital SIM cards and was able to smuggle them out of the country.

With such low standards of living, it is no wonder that Kim Jong-un doesn't want the rest of the world seeing the realities of the country. Still though, wealth does exist and cars are becoming more universal. In Pyongyang particularly, poverty is not as apparent as in the countryside.

2. This photo of a soldier sleeping in a field was a main contributing factor to Lafforgue's banishment from North Korea.

8. A bathtub in a rural home is used as a cistern.

9. This gray market vendor tries to make profits from selling cigarettes and sweets.

10. A scene from the Kimjongilia festival, where thousands of North Koreans line up to visit multiple monuments.

11. The exteriors of buildings in Pyongyang are well maintained, but the interiors paint a very different reality.

12. Peasants are still unaccustomed to seeing cars and are often still seen playing in the middle of streets.

13. A car that belongs to one of Pyongyang's elite members.

14. Lafforgue's official guides requested that he not shoot with the flash because it would scare people.

15. Soldiers have to hitchhike because public transportation between the main towns is limited and permits are required to travel from one place to another.

16. There are almost no safety standards for workers.

17. The delphinium in Pyongyang where 99% of the onlookers are soldiers.

18. Kids pretending to work on computers for the photo. Officials wanted Lafforgue to delete this photo since it is clear that there is no electricity.

19. A member of Pyonyang's elite shops in one of two markets in the city where residents can buy groceries in euros or wins.

21. It is forbidden to take photos of the back of Kim statues since it is considered "rude."

22. It is outlawed to photograph soldiers taking a break.

23. An extremely long line for the bus.

24. A widespread image from North Korea that commonly suggests that residents eat grass from the park.

25. Soldiers push this bus after it broke down.

26. During Lafforgue's visit to the art centre of Pyongyang, there was a power outage.

27. A rare scene captured in front of Kim Il-sung's statue in Mansudae, in Pyongyang.