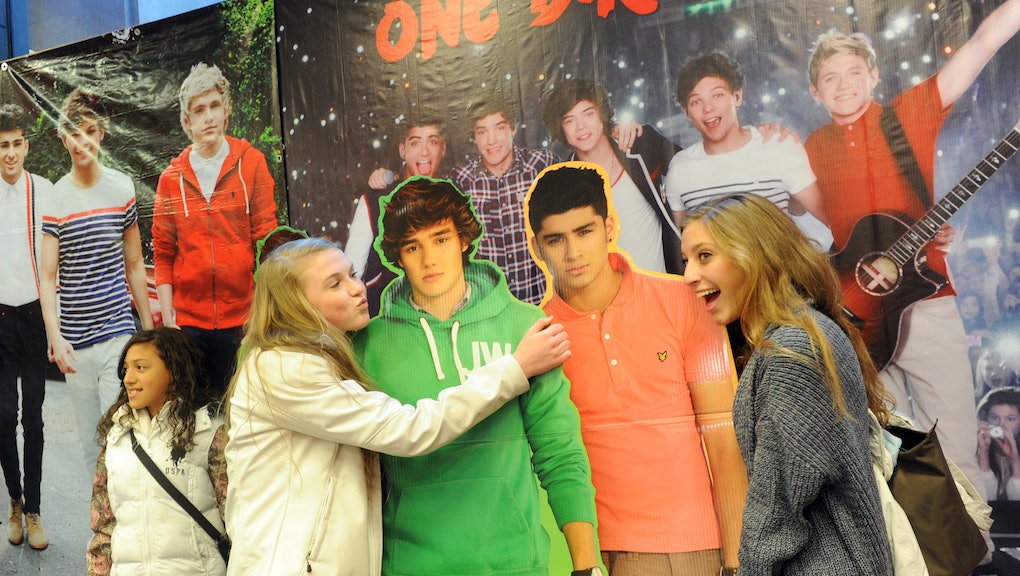 In the music video for their first viral hit, "What Makes You Beautiful," the four Brits of One Direction are walking on a beach, sailor stripes and red pants galore (as one does), when Liam Payne croons the first verse. "You’re insecure, don’t know what for / You’re turning heads when you walk through the door / Don’t need makeup to cover up / Being the way that you are is enough." Then Harry Styles sings, "Everyone else in the room can see it / Everyone else but you."

It sounds sensitive and considerate, but it's not — behind those lines is a dangerous message all too common in pop.

It's a common character — the girl who needs a man to help her see the truth about herself. One Direction especially has made a career off her; Bruno Mars sang her praises at the Super Bowl and on the charts with "Just the Way You Are" ("I know, I know / When I compliment her she won't believe me"). Though it may seem well-intentioned, this attitude is all too prevalent in pop geared at younger audiences, and it's dangerous. Rather than praising a woman for her confidence, her low-self esteem is glorified: "You don’t know you’re beautiful," One Direction sings, "that’s what makes you beautiful." It's an attitude that encourages insecurity while doing nothing to resolve it.

Basically, songs like these are "negs" for all young women. A "neg" is an infamous and super-sleazy pick-up method in which men give backhanded compliments to women in order to make them vulnerable without looking like too much of a jerk. It started on Internet message-boards in the early '90s and launched both a best-selling book and thousands of really uncomfortable bar conversations. It's the same exact idea behind teen pop's style of empowerment, and it's damaging to young women everywhere.

One Direction is a repeat offender. Their song, "Little Things," which hit 33 on the pop charts and has over 160 million views on YouTube, made a popular and supposedly socially conscious play by targeting women's body issues. Payne sings, "I know you’ve never loved the crinkles by your eyes / You’ve never loved your stomach or your thighs / […] But I love them endlessly." Styles later sings, "You still have to squeeze into your jeans / But you’re perfect to me." In part, she's perfect because she doesn't love herself — it's sexy that she worries about her weight and her wrinkles, but she's still a bit overweight.

As Grady Smith of Entertainment Weekly points out of these groups' shared fan base, "Last I checked, One Direction's fans aren’t composed mainly of aging obesity victims — they’re little girls who range in age from about 8-14. At the older end of that spectrum are girls currently enduring middle school, who may very well be feeling insecure about their bodies." Ironically, the band members have been known to date women who most likely don’t have much of a problem fitting into clothes. They make a point of praising insecure girls while celebrating traditional beauty. They sing about the exact opposite of boy star Justin Bieber's "Confident" (in which the model playing his love interest is confident because "She got a body like that") but the message is exactly the same.

Just as the beauty industry has recently been emphasizing "real beauty" — makeup-free, un-Photoshopped women — the One Direction and others of their pop ilk have capitalized on a backwards kind of female empowerment. To be a female pop star now is to endure — and support — endless discussions over whether or not you're feminist. That conversation is increasingly profitable, too. That leaves the young male pop stars who have typically contributed to gendered insecurity in a strange place. In the age of surface-level empowerment, to be a male pop group is to be in a limbo state between accepting real women and promoting the same sexist standards as always. The same standard that has 53% of American 13-year-old girls reporting that they're unhappy with their bodies. The same standard that has 78% of our 17-year-old girls reporting the same.

Thus these teen heartthrobs have become emblematic. They're salesmen — selling the idea that their fans need to earn their approval and affection; that they aren't beautiful until a boy tells them so. It's the idea behind all those lyrics about girls who are way prettier without their make-up. Summerland actor and singer Jesse McCartney has an entire song called "Makeup" in which he repeatedly sings, "I wanna see you when I wake up wake up wake up / 'Cause you look good without make up make up make up / Ain't nothin' on you phony phony phony."

But younger music fans especially deserve better than the same gendered power-dynamic repackaged as social consciousness. We need to call sexism out for what it is, even when it comes disguised as empowerment. Because pop music, like an insecure woman, is prettier when it isn't hiding behind any make-up.