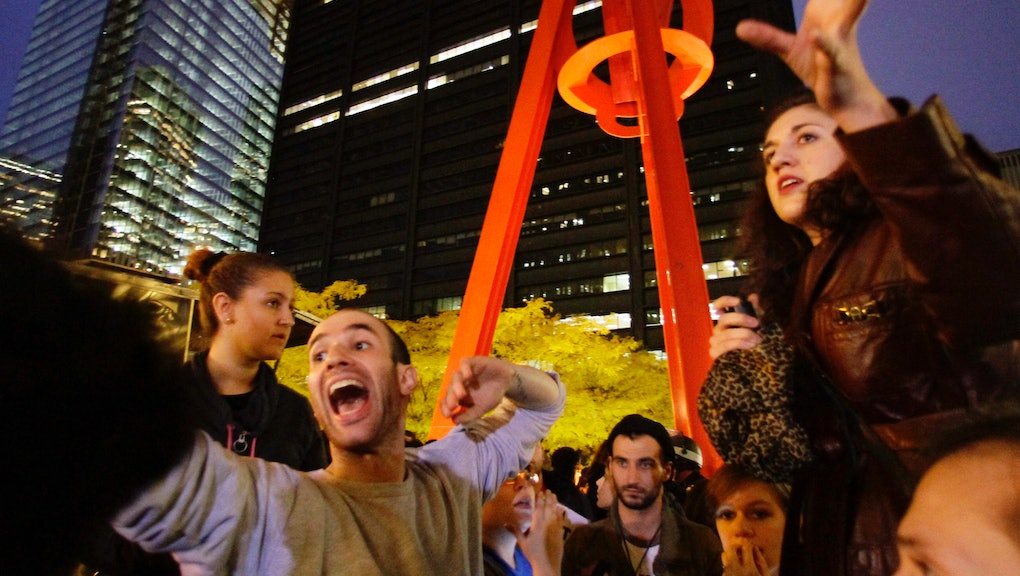 Judgement Day Is Here for the 25-Year-Old Occupy Protester

Updated: May 19, 2014, 1:00 p.m. Judge Zweibel handed down a much more lenient sentence than many people had expected on Monday: three months in prison and five years probation.

The news: Cecily McMillan, the convicted and now meme-worthy Occupy Wall Street protester, will face a judge for sentencing on Monday and may be looking at up to seven years of jail time for elbowing NYPD cop Grantley Bovell in the face in 2012. Whatever the outcome is of tomorrow's ruling, the young activist is prepared for the worst-case scenario — doing hard time.

McMillan and Bovell's accounts of the events on the night of March 17, 2012 greatly differ. McMillan alleges that when she stopped by the Zuccotti Park Occupy encampments, Bovell groped her breast and she instinctively elbowed him without knowing he was a cop. Bovell, on the hand, testified that McMillan deliberately struck him in the face as a calculated show for the benefit of her friends.

New York County Supreme Court Justice Ronald Zweibel is presiding over the case and could dole out a sentence ranging from hours of community service to something as severe as jail time anywhere between 2-7 years. Assaulting an officer is a felony offense in the U.S., which, more often than not, leads to prison time for the assailant.

McMillan rejected a plea deal prior to her conviction, opting to go to trial. "What kind of activist would I be if I wouldn't go to jail?" the 25-year-old told Mother Jones.

Regrettably, our criminal justice system appears to be all too eager to lock up a young student after she was sexually assaulted and beaten into a seizure by police officers. Even worse, the assistant district attorney on the case, Erin Choi, said that McMillan's version of the story is "so utterly ridiculous and unbelievable that she might as well have said that aliens came down that night and assaulted her."

The background: On May 5, McMillan was found guilty for assaulting an officer. The decision is setting a precedent as one of the harshest rulings to come out of the 2,500 Occupy Wall Street protesters who have been moving through the criminal justice system since the 2012 Zuccotti Park raid. After the guilty conviction, outraged protesters flocked to Zuccotti Park, where the incident originally transpired, to voice their support of McMillan.

The Zucotti raid, in which McMillan and 70 others were arrested, was supposed to be celebratory. The evening marked the six month anniversary of the founding of Occupy Wall Street. Many protesters sat on the ground linking arms, chanting "we are not afraid" as police officers started to pluck people from the crowds to lead them out of the park and arrest them.

McMillan's future: If Judge Zweibel hands down a maximum jail sentence on Monday, McMillan will definitely have to put her life plans on hold (she's currently studying towards a masters degree in liberal arts at the New School in New York City). In any case, McMillan is prepared to pay for what she did no matter what the sentence is, because she thinks "This is all part of the plan."