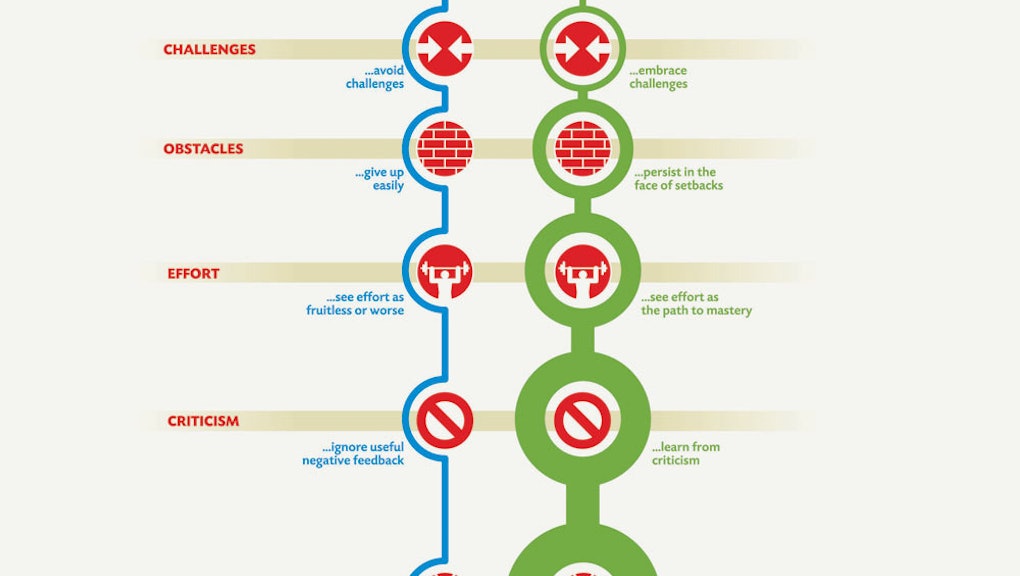 Science Shows How the Brains of Intelligent, Successful People Are Different From Everyone Else

What's the best way to take control of your own life and push yourself against boundaries?

According to Stanford psychologist Carol Dweck, it's all about your mindset. Successful people tend to focus on growth, solving problems and self-improvement, while unsuccessful people think of their abilities as fixed assets and avoid challenges.

Dweck says that there are two basic categories that peoples' behavioral traits tend to fall into: fixed and growth mindsets. This infographic by Nigel Holmes summarizes these differences.

A person with a "fixed" mindset tends to view themselves with static traits and a deterministic outlook. For these people, intelligence, character and creative ability all cannot be changed in any meaningful way, while success is seen as affirmation of those given abilities and traits. The fixed mindset views the human almost like an already-completed spreadsheet, with things like intelligence and personality operating as unchanging, fundamental characteristics. Thus, "striving for success and avoiding failure at all costs become a way of maintaining the sense of being smart or skilled."

A person with a "growth" mindset, on the other hand, sees challenges as things to overcome and views failure as an opportunity for growth and personal development.

In the end, Dweck says, how we approach life can determine our success and happiness. She writes her "research has shown that the view you adopt for yourself profoundly affects the way you lead your life. It can determine whether you become the person you want to be and whether you commit to and accomplish the things you value." Going into more detail, Dweck argues the following:

"Believing that your qualities are carved in stone — the fixed mindset — creates an urgency to prove yourself over and over. If you have only a certain amount of intelligence, a certain personality, and a certain moral character — well, then you'd better prove that you have a healthy dose of them. It simply wouldn't do to look or feel deficient in these most basic characteristics."... There's another mindset in which these traits are not simply a hand you're dealt and have to live with, always trying to convince yourself and others that you have a royal flush when you're secretly worried it's a pair of tens. In this mindset, the hand you're dealt is just the starting point for development. This growth mindset is based on the belief that your basic qualities are things you can cultivate through your efforts. Although people may differ in every which way — in their initial talents and aptitudes, interests, or temperaments — everyone can change and grow through application and experience."

The science: This isn't just another self-help book; Dweck has the science to back it up. In a now-famous 1998 study, Dweck and Claudia Mueller separated 128 children aged 10-11 into two groups. Each group was asked to solve mathematical problems; one group was praised for their innate characteristics ("You did great — you must be really smart") while another was praised for their effort ("You did great, you must have tried really hard").

Next, they were given a harder set of problems — so hard, in fact, that many subjects barely got even one question correct. All were told they had done worse. This was followed up with a third set of once-again-easier questions to see how failure impacted performance.

The result? The children who had been praised for their intelligence did roughly 25% worse on the third test than those praised for their work ethic. The intelligence-praised group was more likely to blame their inability to solve the problems on their lack of ability or the difficulty of the question rather than not having tried hard enough. They also enjoyed working on the tests less and gave up sooner.

Overall, Dweck and Mueller's research "[supported] our hypothesis that children who are praised for intelligence when they succeed are the ones least likely to attribute their performance to low effort, a factor over which they have some amount of control ... [such praise] does not appear to teach children that they are smart; rather, such praise appears to teach them to make inferences about their ability versus their effort from how well they perform."

Dweck and Mueller performed five other, similar experiments and found that the children who were told they were intelligent rather than hard-working learned to measure their own intelligence from the praise. In fact, they seemed to take low performance as an indicator that they simply weren't up to the task. The children praised for their effort seemed to learn that intelligence was "malleable" and defined it in terms of "motivation and knowledge."

In another study, Dweck and other researchers offered children a choice between redoing an easy jigsaw puzzle or trying a more difficult one. Those with a fixed mentality redid the easy puzzle, expressing the belief that smart kids don't make mistakes, while ones with a growth mentality were confused as to why someone would want to repeat the same puzzle and saw tackling new problems as a way to advance themselves.

Other research has shown that attitudes towards a task matter just as much as a person's actual ability to perform them. Soldiers about to embark on a standard 25-mile march, for example, were given different information about the length of the route they had to complete. Those told it was going to be 37 miles, or told nothing about the length, psyched themselves out and did worse than those given an accurate description or told it was only 18 miles. The authors concluded that "what mattered was how closely the anticipated challenge matched the soldiers' actual capabilities," saying that "If we do not believe we can make it, we will not get the resources we need to make it." The results were confirmed by measuring stress hormones in the soldiers' blood levels.

What's this mean for me? Here's how Prof. G. Richard Shell summarizes the results of Dweck's field of research in his book Springboard: Launching Your Personal Search for Success:

"… Repeated experiments have demonstrated the value of praising effort rather than innate talent. If you are praised by others in the right way, this can lead you to praise yourself based on your genuine effort when you accomplish something significant and discount comments about the role of your natural ability. You should ignore any result — good or bad — that comes after you put in only a halfhearted effort. And you should be proud of any result that follows hard work — even when the result is not what you had hoped."

Or as to paraphrase Dweck, people with fixed mindsets tend to shy away from challenges. Their perceived deficiencies seem permanent and in the face of setbacks, they tend to be less resilient, believing they've reached their potential and can't go any further. In the long run, fixed minds will achieve less.

Those with a growth mindset, on the other hand, don't necessarily think "anyone can be Einstein, but they understand that everyone can develop their abilities and that even Einstein wasn't Einstein until he put in decades of dedicated labour." Challenges help these people improve and setbacks ultimately motivate you to work harder and move forward.