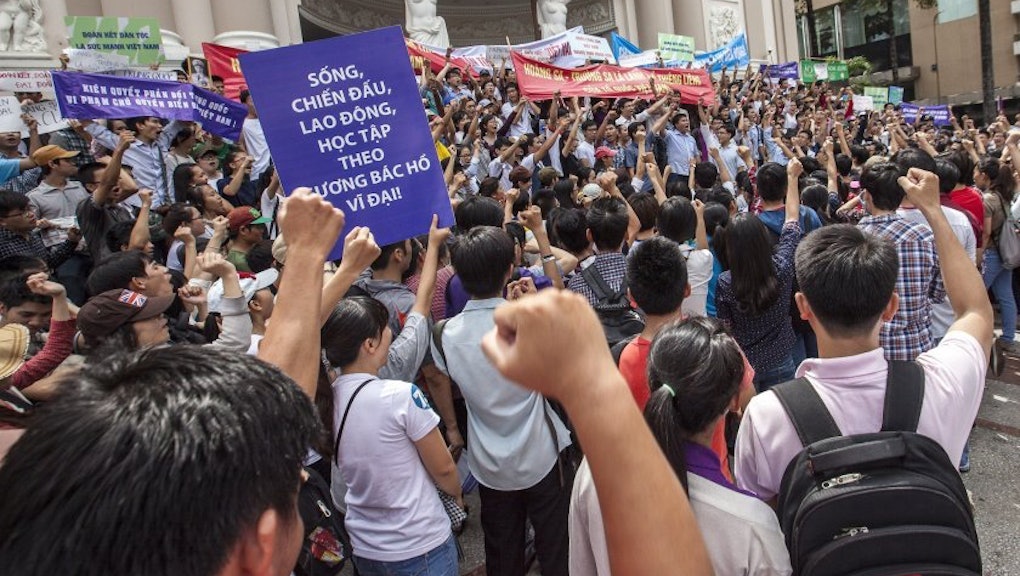 Over the past couple of weeks, violent riots have broken out throughout Vietnam over a naval dispute with China. What started as protests over China's controversial oil drilling has escalated into ethnic violence against Chinese and Taiwanese people and their businesses in Vietnam. Though Vietnamese authorities are cracking down on violence, damage has already been done and the standoff between the two countries looks no better.

The situation has become so volatile that the Vietnamese prime minister mass-texted millions of people to keep peace while still defending their territory from the Chinese.

"The prime minister requests and calls on every Vietnamese to boost their patriotism to defend the fatherland's sacred sovereignty with actions in line with the law," the text message read. "Bad elements should not be allowed to instigate extremist actions that harm the interests and image of the country."

Here are 11 photos that sum up what's been happening on the ground.

The conflict heated up on May 1, when China sent an oil rig to the highly disputed (and reportedly very oil-rich) South China Sea. Vietnam sent ships in response, leading to a tense standoff.

China announced a three-mile exclusion zone around their oil rig, leading both sides to beef up area naval presence and accuse each other of ramming vessels and shooting water cannons. China reportedly has 119 vessels in the disputed waters, "including warships, coast guard vessels and fishing boats."

"We do not make trouble, but we are not afraid of trouble," said Gen. Fang Fenghui, the chief of the general staff of the Chinese People's Liberation Army (PLA). "In matters of territory, our attitude is firm. We won't give an inch."

Last weekend, Vietnamese authorities allowed protesters to hold public demonstrations, which is quite rare in the country. That led to a buildup of nationalist anger, which caused more violent dissidents to group together.

By Tuesday and Wednesday, several groups abandoned peaceful protests and began to lead riots against dozens of Chinese-owned factories. Many Taiwanese businesses, like the Tan Than Industries bicycle factory above, were affected as well.

Factories like the ACAMA building above were burned and looted, leading to increasing concern over Chinese nationals' safety. According to Taiwanese authorities, 224 Taiwanese-owned factories were damaged, 18 of which were burned.

According to the authorities, two Chinese nationals died in the violent attacks; more than 100 were injured.

The Chinese government has already evacuated 3,000 nationals from Vietnam. Ships are being sent to bring another 4,000 people out of the country.

Vietnamese authorities said they have already arrested over 1,000 people associated with the riots and announced last weekend that no more protests will be allowed.

In the capital of Hanoi, authorities closed off streets and public spaces near the Chinese Embassy and have prevented protesters and journalists from entering the area. Access to social networking sites such as Facebook has also reportedly been limited.

In the meantime, China has suspended some of its bilateral exchange plans with Vietnam and is warning citizens against visiting the country. "The severe violence targeting foreign companies in Vietnam since May 13 has caused casualties and property losses for Chinese nationals. This has destroyed the atmosphere and conditions for bilateral communication and cooperation," Chinese Foreign Ministry spokesman Hong Lei said on Sunday.