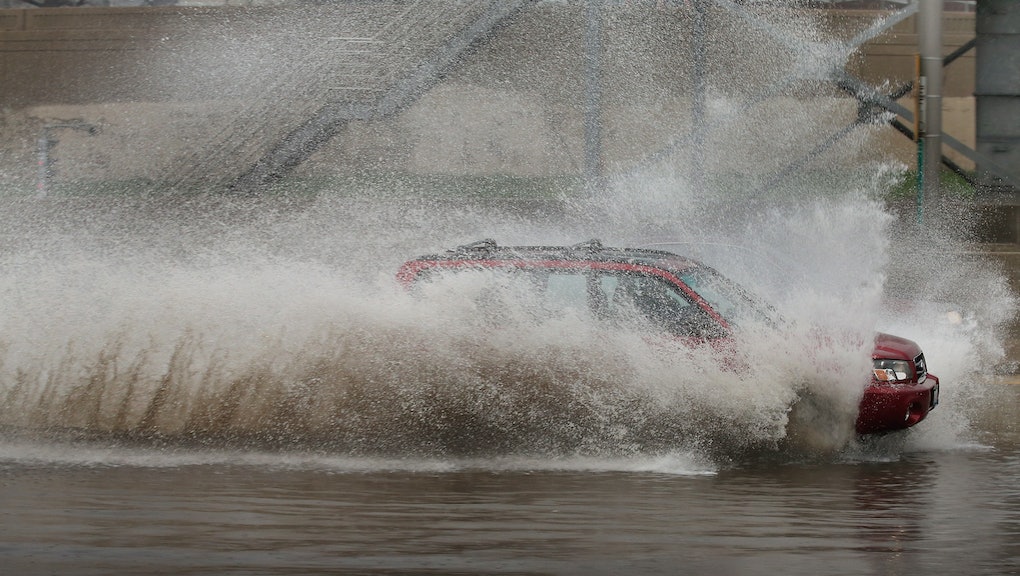 The news: Farmers Insurance Co., one of the nation's biggest insurance companies, has filed nine class-action suits alleging that local Chicago-area governments knew that climate change would lead to greater rainfall but haven't taken action to guard against future flooding. According to the suit, roughly 200 localities failed to adequately prepare sewers and stormwater drains for a two-day storm in April 2013 for which Farmers paid out extensive damages.

ThinkProgress writes this might be the first of many battles to come between insurance companies that are realizing climate change-related disasters will inevitably threaten their bottom line and government authorities who refuse to mitigate the effects of a changing climate. Insurance expert Andrew Logan told E&E News that Farmers "could be positioning itself to avoid future losses nationwide from claims linked to floods, sea-level rise and even lawsuits against its corporate policyholders that emit greenhouse gases."

"It's a longshot for the insurance companies, but it's not completely implausible, and if you have enough cases like this going forward it might build some helpful precedent," Robert Verchick, a former member of the Obama administration's Climate Change Adaptation Task Force, told Reuters.

The background: How bad was the flood? Illinois Gov. Pat Quinn was forced to declare a state of emergency, while major roads disappeared and residents were limited to boat travel around their neighborhoods. The Chicago Tribune reported that "an overnight deluge overwhelmed Chicago's underground labyrinth of aging sewers and giant tunnels, forcing a noxious mix of sewage and stormwater into local waterways and Lake Michigan. The surge of murky, debris-strewn water so overloaded the system that sewage began to back up in basements and geysers of wastewater shot out of several sewer manholes."

At the time, Chicago authorities blamed the flooding on climate change. Department of Water Management spokesman Tom LaPorte told Medhill News Service at the time: "This is a new kind of storm associated with climate change. It's been around for five or six years. Other storms are rather local, but in this case the entire region got really walled."

An abandoned car bobs in standing water under an overpass April 18, 2013, in Chicago. Image Credit: AP

Farmers alleges that the localities were aware that "During the past 40 years, climate change in Cook County has caused rains to be of greater volume, greater intensity and greater duration than pre-1970 rainfall history evidenced." They're also claiming that local governments ignored reports from 2008 and 2011 that detailed the connection between climate change and rainfall and the poor state of the regional water management system.

Insurers have a history of backing the science on climate change, but according to sustainability organization Ceres, the industry has yet to implement comprehensive climate change strategies (Farmers was listed along with industry leaders in doing do). Figuring out what's covered, what isn't and who's to blame will affect the insurance industry dramatically moving forward. ThinkProgress writes:

"Last year a study for the Federal Emergency Management Agency found that sea level rise is projected to increase coastal flood-hazard areas in the U.S. by 55% by 2100. If adaptation measures are not implemented, the study projects that the number of coastal flood-insurance policies will increase by 130% over the same time period. While flood insurance is overseen by the controversial National Flood Insurance Program, this is an example of the increased role of insurers in the face of climate change as well as the increased burden on insurance companies and taxpayers to cover the costs."

Munich Re insurance group says global weather-related losses and damages have risen from $50 billion in the 1980s to close to $200 billion over the past 10 years. Insurers aren't the only ones concerned — young people across the country recently filed lawsuits claiming that the government's lack of climate change preparation will essentially deprive them of their civil rights.

What does this mean for me? State and local governments are in a bind. Infrastructure across the U.S. is already crumbling, with the American Society of Civil Engineers rating our civil infrastructure as a D+ and estimating it needs some $3.6 trillion in modernization by 2020. But an age of relative austerity has deprived governments of the funding they need to conduct normal operations in many cases, let alone the massive investment America needs to adequately prepare for a changing climate.

The Center for American Progress says that the total bill for "responding, rebuilding, and preparing for the future" could reach hundreds of billions if action isn't taken immediately. Insurance companies can sense the coming century will be one plagued by extreme weather events, and they want governments to pay to prepare communities and infrastructure for the predicted damage before it's too late and the costs are insurmountable.

Either way, taxpayers will foot the bill — but it's the difference between a large one and an unpayable one.