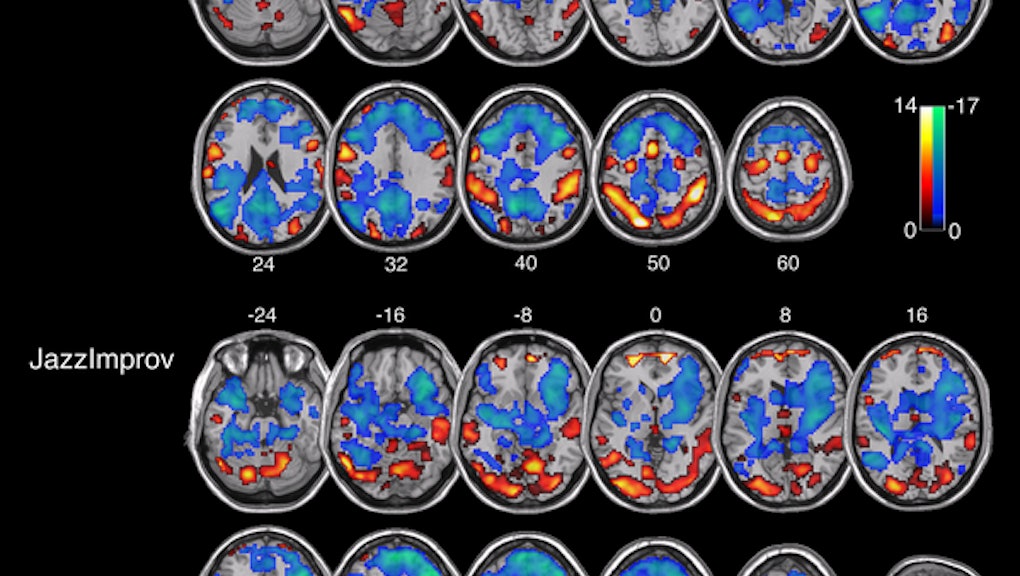 Here's a Surprising Look at What Music Does to Your Brain

We often take music for granted. For example, the majority of American workers listen to music for most of the work day. Yet when you try to talk about what exactly music does to you, it's hard to find the words. It seems mystical and abstract. But two recent scientific studies on how the brain reacts when it's exposed to music suggest that there's something fundamentally physical and spiritual going on — something a lot like one basic human instinct.

Utilizing functional magnetic resonance imaging (fMRI), a 2008 study focused on observing the brain responses of musicians while they played music, while a 2013 study looked at the fMRI recorded brain activity of listeners as music was played. Taken together, they paint a powerful portrait of why exactly music influences us the way it does. It comes down to one simple truth: Music actually is a special kind of language, one that works on our emotions rather than our reason.

In 2008, Dr. Charles Limb, an otolaryngologist at Johns Hopkins School of Medicine, put musicians into an MRI with an instrument and told them to play both memorized and improvised pieces of music. When the musician improvised, another musician was put in the control room to play along. The findings were striking: When the two musicians played together, their brains responded exactly as they do during spoken conversation, with one difference. The regions that generally process the meaning of language shut down — the music was simply a communication impulse in structure and intent.

That's not just something that happens between musicians, though. Music acts on the brain of a listener as if a recorded musician were speaking to you too. The 2013 study by researchers from Finland, the UK and Denmark went even further. They exposed subjects to different types of music, ranging from the Beatles' epic Abbey Road medley to a modern rendition of an Argentinian tango. The takeaway: The human brain reacts differently to different types of music, eliciting very specific emotional, physical and behavioral responses, almost as if music were a map, communicating emotions to a brain even better than words. As in conversation, different inputs stimulate nearly all of the brain.

The study found something even more striking, though. It isn't just music in general that affects us: Every genre and every song is its own map to a unique combination of feelings and thoughts. As this video recording of an fMRI of a brain responding to tango music shows, our reactions to music can be profound.

Indeed, a quiet song may make you reflective or prompt a daydream. An upbeat, poppy song with a beat will energize you and make you want to dance. An aggressive song may inspire aggressive feelings. A melodic, lyrical song might make you happy and want to sing along.

But no matter the type, music and communication are things most of us need. A different study at the Montreal Neurological Institute at McGill University suggests that listening to music "can arouse feelings of euphoria and craving," even stimulating dopamine release in the brain — a chemical affiliated strongly with pleasure, reward and even addiction. Like speaking with a dear friend or hearing something sweet from someone you love, music is a conversation, one the brains of listeners and players alike need to keep having.