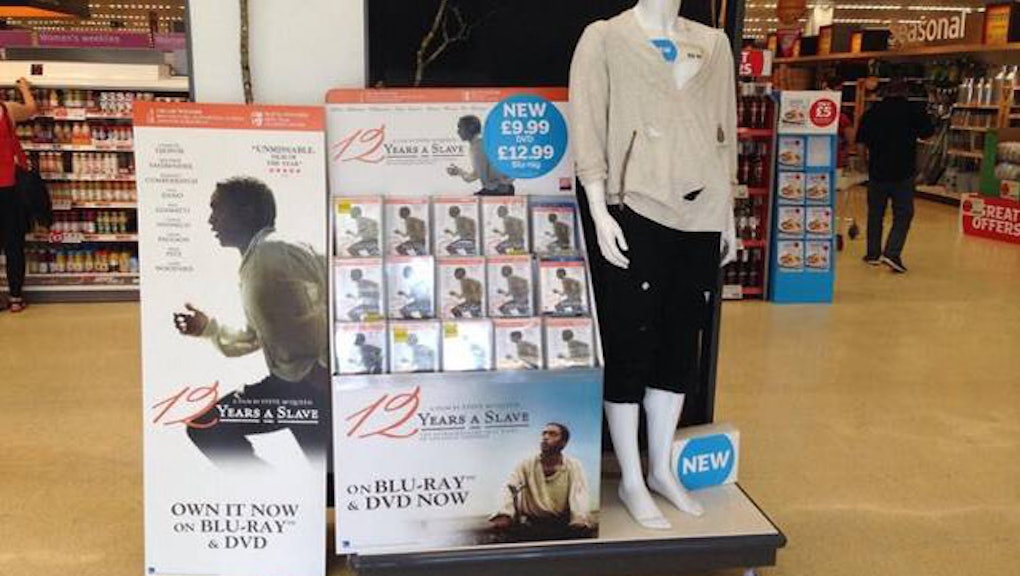 You Can Now Dress Like A Slave, Thanks to This Popular Supermarket Chain

In an offensive, misguided and frankly bizarre marketing move, the British supermarket chain Sainsbury's decided to advertise the DVD release of 12 Years a Slave with a life-sized mannequin dressed as the movie's protagonist, Solomon Northup.

The mannequin — which, notably, is white — is clothed in a dirty, ripped, beige shirt and baggy, black, calf-length trousers. It has a twig poking out of its pocket, and a price tag around its neck that screams "NEW."

It seems surprising that staff at the Oxford, U.K., store didn't realize that its marketing ploy — displaying a white-skinned model, dressed as a slave, with a price tag around its neck, to promote its capitalist endeavors — would be considered offensive. After the Independent picked up the story, Sainsbury's issued an apology.

Sadly, Sainsbury's isn't the first company to be guilty of disrespectful or downright idiotic PR stunts. Just look at this Intel ad, which features a white executvie surrounded by men literally bowing down to him.

But if the response to these types of ads on social media is any indication, racist marketing ploys aren't just ignorant; they're very, very bad for business.

In the case of this display, the ignorance is rather stunning. 12 Years a Slave provided a cinematic — and brutal — glimpse at the life of an American slave. And it's not exactly something you'd want to look like, let alone experience. Based on the true story of Soloman Northup, a free African-American man kidnapped in 1841 and sold into slavery, the Oscar-winning film pulls no punches in its depiction of the beatings, abuse and rape to which slaves were subjected.

Here's a pro-tip: When trying to sell a commercialized product, avoid recreating an image that harks back to decades of discrimination and persecution, especially when that imagery still resonates loudly with an entire community. Slavery — and the issue of oppression in general — casts a dark shadow that has not been completely eliminated from society. Attempting to capitalize on it to sell DVDs is neither clever nor creative. It is certainly unlikely to be effective.