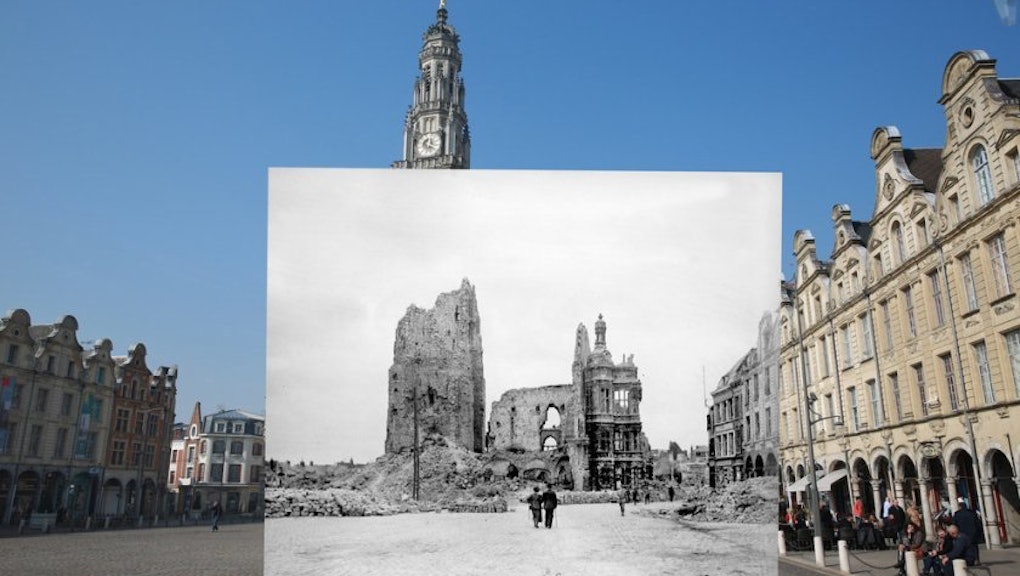 Just watching Saving Private Ryan doesn't really do justice to the horrible damage that World War II did to Western Europe. And even fewer Westerners remember the scale of the carnage of World War I, overshadowed as it was by the brutal German-Soviet Eastern Front and mass-murder of Jews, Poles, and other "undesirables" by Nazi forces of World War II.

But thanks to Google Images, you can now see how both of these devastating wars would play out in the modern world. The Guardian's Halley Docherty covers Europe during World War II, while photographer Peter MacDiarmid took on World War I.

The 17 images are a stark reminder that what happened during the first half of the last century must never happen again.

The town hall and belfry of Arras was completely annihilated, reduced to a burned-out shell and a stump of a tower after intense fighting.

Sixty-eight people were killed by the blast, with more than 70 injured. The damage was quickly repaired and the station was reopened by Jan. 12, 1941.

3. Yes, that's a bus being pulled out of the same crater.

The cathedral took direct hits during the war, causing the lead of the roofs to melt and fire to burn out most of the building's interior. It was restored from 1918-1938.

5. Nazi soldiers parade down the Champs-Elysées in Paris, June 1940.

For more on the Nazi occupation of Paris, see this collection of propaganda photos from photographer Andre Zucca, who the New York Review of Books' Ian Burman described as "... not a Nazi, but he felt no particular hostility to Germany either ... Zucca simply wanted to continue his pre-war life, publishing pictures in the best glossy magazines. And the one with the glossiest pictures, in fine German Agfacolor, happened to be Signal, the German propaganda magazine."

In 1944, the Polish resistance's Home Army attempted to liberate Warsaw from Nazi control. Fighters hoped to oust Nazis at the same time as Soviet forces arrived to evict German forces from the city. The USSR's troops didn't arrive — perhaps intentionally — and 16,000 or more members of the Polish resistance were killed. Over 150,000 Polish citizens were liquidated in mass executions, and an additional 700,000 fled the city.

Pictured are the ruins of the Prefectural Industrial Promotion Hall that survived the atomic blast on Aug. 6, which still stand as part of the Hiroshima Peace Memorial. An estimated 90,000-166,000 people were destroyed instantly or died painfully from radiation over the next 2-4 months, from a pre-attack population of 340,000-350,000.

Over 125,000 civilians are estimated to have been killed during the entire operation to retake Berlin. Vengeful Soviet troops engaged in mass looting, rape and indiscriminate murder during the early days of the occupation.

The German Luftstreitkräfte lost 8,604 crewmen and pilots during World War I.

Royal Garrison Artillery soldiers carry duck-boards across the frozen Somme, just months after one of history's bloodiest battles. From July-November 1916, British and French soldiers fought against the German Empire around the river. More than 1 million men were killed or wounded.

The cathedral's statue of the Virgin Mary and the baby Jesus took a direct hit from a shell on Jan. 15, 1915, where it hung until another bombardment finished off the tower in 1918. A replica statue now stands in its place.

Hundreds of men line up to answer a call by the War Office for married men to become munitions workers.

The First Battle of the Marne claimed 81,700 French and British lives. Thirty-nine French and six British divisions clashed against 29 German ones, ending the Central Powers' push on Paris and reducing the area around the Marne river to shreds.