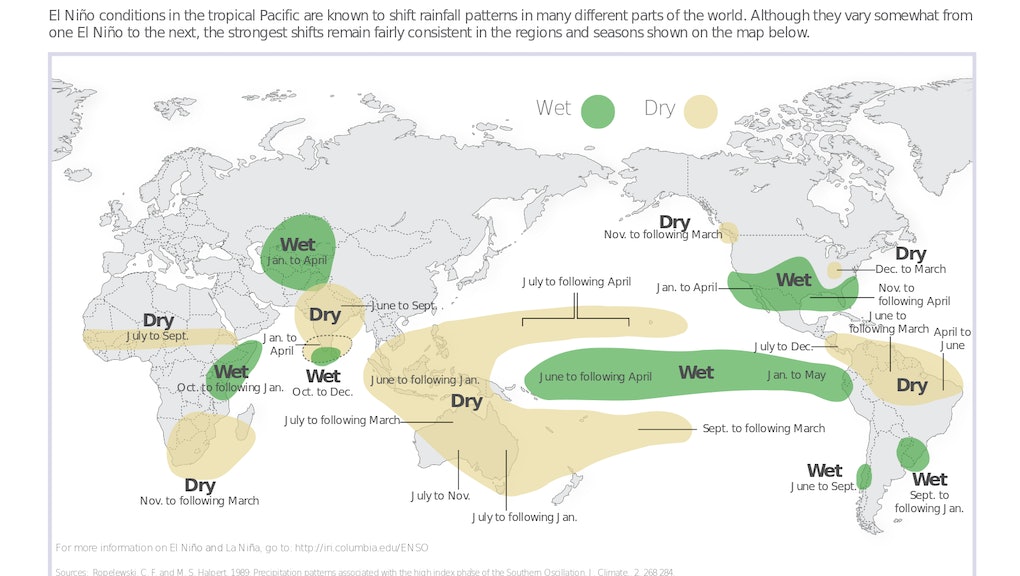 The Weather Forecast for the Rest of Year Is Out, And It Could Be Catastrophic

The news: This year's weather might be awfully weird — and potentially very, very dangerous. Meteorologists are preparing for an El Niño that could rival the catastrophic 1997-1998 phenomenon, which the Wire calls "potentially terrifying." And for good reason — that event killed 1,500 people and cost the globe as much as $35-45 billion. In Peru some 350,000 people were driven from their homes; in Argentina, 150,000.

The designation "El Niño," according to the National Oceanic and Atmospheric Administration, "refers to the large-scale ocean-atmosphere climate interaction linked to a periodic warming in sea surface temperatures across the central and east-central Equatorial Pacific." Such events are responsible for disrupting typical weather patterns (often severely), and depending on where you live, El Niño can trigger anything from torrential rainstorms to severe drought. This usually happens every few years, but environmental scientists worry that climate change could increase the phenomenon's frequency.

Data collected from a NASA satellite has seen a series of "Kelvin waves," massive ripples in the ocean that typically precede an El Niño event. NASA's Jet Propulsion Laboratory Climatologist Bill Patzert told NASA Science that "a pattern of sea surface heights and temperatures has formed that reminds me of the way the Pacific looked in the spring of 1997."

How could it affect me? For one, it depends on where you live. While it's not certain we'll get hit this year, if we do, be prepared for a big one.

The 1997-1998 event caused deadly flooding and mudslides in Peru and created Hurricane Linda off the Mexican coastline — the "strongest Eastern Pacific tropical cyclone ever recorded." Extreme weather systems fueled a mosquito boom across Africa, leading to epidemics of tropical disease. The U.S. mostly just experienced heavy rainfall. And while that might sound appealing to drought-starved states in the American West, it also means that the coming winter might dump a lot of snow and ice. In addition to the extreme weather, it also made 1998 one of the hottest years to date.

Is it linked to climate change? Environmental scientists believe so, though a definitive connection has yet to be established. A 2013 study examined 7,000 years of coral fossils and found "tentative" evidence that El Niño gets stronger with higher levels of atmospheric carbon — which, by the way, is currently at the highest recorded level ever.

If a severe El Niño hits the world and wreaks havoc, climate change could again be propelled to the front of the world's political agenda. The New York Times even suggests it might force people to pay attention to climate change:

"The timing could provide an uncomfortable backdrop for Republican presidential hopefuls who are skeptical of climate change, like Florida Senator Marco Rubio, who recently said he did not believe human activity was causing climate change. Democrats, eager to cast Republicans as anti-science or to appeal to voters in the endangered coastal city of Miami, might be likelier to re-emphasize climate change if polls show an increase in the public’s belief in global warming, which [Stanford University professor] Jon Krosnick anticipates will happen if global temperatures rise to record levels."

If it doesn't — well, that's probably good news for everyone. But it will hit us sooner or later.