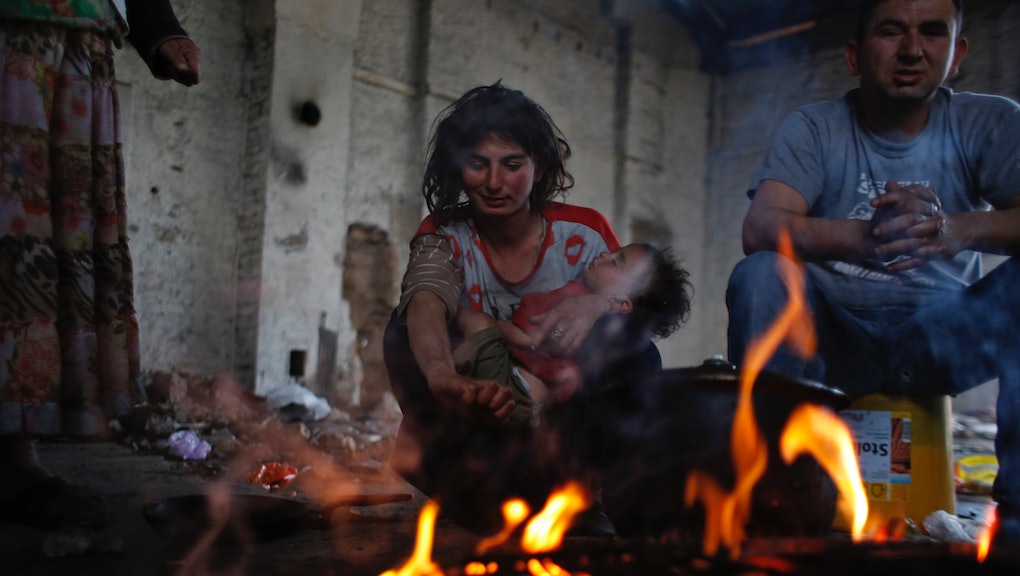 To more than 1 billion people across the globe, $1.25 is the daily budget for food, medicine and shelter. The World Bank defines this stark reality as the "extreme poverty" rate.

In 1973, then World Bank President Robert McNamara, former president of Ford Motor Company and former defense secretary to Presidents John F. Kennedy and Lyndon B. Johnson, coined the term "absolute poverty" in his famous Nairobi speech as a condition of deprivation that "falls below any rational definition of human decency."

The percentage of the world's population living in extreme poverty, according to the $1.25 rate set in 1990, was halved in 2010. It is set to be cut in half again in the next two decades. But even the richest countries have yet to eradicate extreme poverty.

Fighting poverty (not just extreme poverty) is about more than slick posters and hashtags. It involves a tough, hard look at all of the factors that create economic inequality, both locally and on the global scale.

Here are startling facts about poverty today that may surprise you and put the oft-used term into context:

3. Adding another five countries — Indonesia, Pakistan, Tanzania, Ethiopia and Kenya — would include almost 80% of the world's extreme poor.

5.  Approximately 1.2 billion people — nearly as many as the entire population of India — still live without access to electricity.

6. Sub-Saharan Africa accounts for more than one-third of the world's extreme poor.

7. Combining results from 27 Sub-Saharan African countries, 54% of residents are living in extreme poverty — the highest proportion among global regions worldwide.

8. About 75% of the world's poor people live in rural areas, depending on agriculture for their livelihood.

10. If the developing world outside of China returns to its slower pace of growth and poverty reduction rates of the 1980s and 1990s, it would take 50 years or more to lift 1 billion people out of poverty.

12. But poverty is not just an issue in the developing world. There are 16.4 million children living in poverty in the United States. That's about 21%, compared to less than 10% in the U.K. and in France. The percentage of poor children in the U.S. has also climbed by 4.6% since the start of the Great Recession in 2007.

13. In 2012, a North Carolina legislator claimed there was no such thing as extreme poverty in the state. However, three of the top 10 poorest areas in America are located in North Carolina.

14. Israel has the highest poverty rate in the developed world, about 20.9%, according to a study by the Organization for Economic Cooperation and Development.

16. In 2010, one out of every six Americans were enrolled in at least one government anti-poverty program. One in four children in America participated in the Supplemental Nutrition Assistance Program (SNAP), also known as food stamps, in 2011.

17. One in three American women — about 42 million — either live in poverty or on the brink of it. And, 1 of every 6 elderly people in America live in poverty.

19. Taking food stamps, housing subsidies and refundable tax credits into account, the number of American households in extreme poverty is 613,000, which is about 1.6% of non-elderly households with children.

20. Poverty is the main cause of hunger because the poor lack the resources to grow or purchase the food they need.

21. Even though there is enough food produced worldwide to provide everyone with an adequate diet, nearly 854 million people, or 1 in 7, still go hungry.

23. About 2.8 billion people still rely on wood, crop waste, dung and other biomass to cook and to heat their homes.

24. Despite the fact that China has achieved more than any other nation in energy efficiency, the country still faces some of the world's greatest energy poverty challenges. Almost 612.8 million people, nearly twice the population of the United States, lack clean fuel for cooking and heating in China.

25. More than 6.9 million children died under the age of five in 2011 — that's about 800 every hour — most of whom could have survived threats and thrived with access to simple, affordable interventions.

Image Credit: AP. A young child living in a slum on the outskirts of Islamabad, Pakistan.

26. A child born in the world's poorest nations has a 1 in 6 chance of dying before their fifth birthday. In high-income countries, the odds are about 1 in 165.

Image Credit: AP. A young homeless girl plays on the railing of her temporary shelter in Jammu, India.

27. The richest 85 people in the world control as much wealth as the poorest half of the world.

28. The world's 100 richest people earned enough money in 2012 to end extreme world poverty four times over, according to a report by Oxfam.

30. About 47% of those surveyed believe that if poor people received more assistance, they would take advantage of it.

31. According to a survey titled "Perceptions of Poverty: The Salvation Army's Report to America," almost half of those surveyed agreed that "a good work ethic is all you need to escape poverty."

32. Almost 43% agreed that if poor people want a job, they could always find a job, while 27% said that people are often poor because they are lazy. Another 29% even said they have lower moral values.

33. The median income for people in the developing world is $3 or less a day. That's less than the cost of a frappuccino at Starbucks.

Image Credit: AP. A family and their mobile home in Owsley County, Kentucky.

35. The Pew Research Center's Project for Excellence in Journalism found that out of 52 mainstream media outlets analyzed, coverage of poverty issues amounted to less than 1% of available news space from 2007 to 2012, a period that covered the historic recession.

36. The report also concluded that media organizations chose not to cover poverty because "it was potentially uncomfortable to advertisers seeking to reach a wealthy consumer audience."

37. An online game titled "Survive125," was launched by Live58, an NGO devoted to ending extreme poverty, and challenges gamers to survive one month on $1.25 a day by facing a series of daunting questions that millions of people face every day just to survive.

38. However, campaigns like this one have been criticized for being "patronizing": "The idea that you can simply dip your toe into human suffering for a week is spurious and patronising to those who actually live in poverty," wrote Maya Oppenheim for Ceasefire Magazine.

Image Credit: AP. A Muslim family in a refugee camp, after fleeing the conflict in Central African Republic.

39. Given the number of occasions that world leaders and influencers have promised to eradicate poverty, the world should be much further along than it is. In April 2013, Jim Kim, president of the World Bank said, "For the first time ever, we have a real opportunity to end extreme poverty within a generation." Eight years before that, Nelson Mandela said, "In this new century, millions of people in the world's poorest countries remain imprisoned, enslaved, and in chains. They are trapped in the prison of poverty. It is time to set them free." Before that, President Lyndon B. Johnson launched his war on poverty by saying "for the first time in our history, it is possible to conquer poverty." That was back in 1964.

40. In order for the world to effectively reduce poverty, countries need to focus not only on achieving growth as an end in itself but also on implementing policies that allocate resources to the poor, including raising income growth among the bottom 40% of earners.

41. One report warns of poverty's "revolving door," alluding to the fact that climbing out of extreme poverty and staying there can be very difficult unless more is done by 2030 to support the world's poorest populations in hard times.

42. The world achieved Millennium Goal Development 1 — to halve the poverty rate among developing countries — five years ahead of schedule in 2010.

43. If we maintain the same rate of progress toward eradicating poverty that we've had since 2000 (or hopefully, accelerate it), we would reach the target around 2025-2030.

44. The world's richest man, Bill Gates has even gone so far as to say there will be "almost no poor countries by 2035."

45. Despite financial crises and surging food prices, the share of people living in extreme poverty across the globe has continued to decline in recent years.